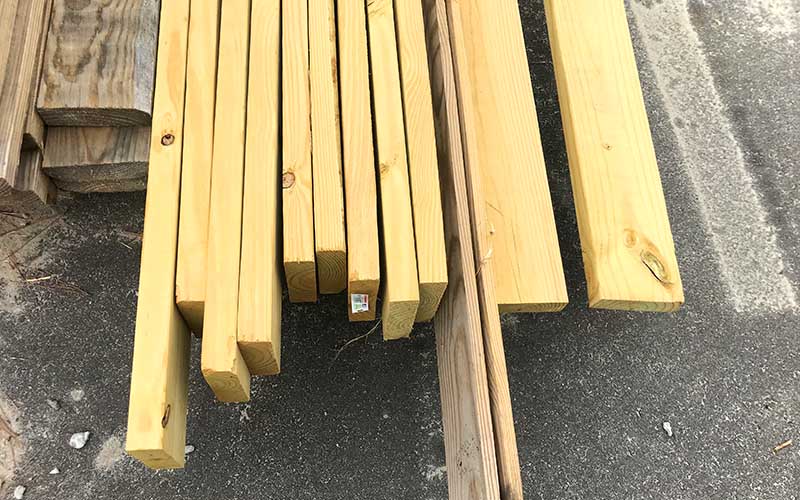 At a Wilmington construction site sits a pile of lumber, the price of which has skyrocketed in recent months. (Photo by Cece Nunn)
During a recent discussion about how well the local housing market is doing, Brunswick County Association of Realtors CEO Cynthia Walsh summed up in one word what, on the other hand, is becoming a big problem.

The prices of lumber have increased exponentially over the past several months. The National Association of Home Builders says that lumber costs for the average single-family home have climbed more than 130% since April of this year. According to an NAHB analysis, the jump has resulted in an increase of more than $16,000 in the price of a new single-family home. The average cost increase for a new multifamily unit is about $6,107.

“That’s really, really concerning,” Walsh said during a BizTalk in August. “We are seeing these new homes could potentially jump up in price. And I’m not talking about, you know, just the giant new homes. I’m talking about the affordable homes, too.”

She added, “We have a lot of those in Brunswick County, where you can buy a brand new home, pick out your kitchen cabinets, pick out your flooring; you get to do that and you’re under the $200,000 mark. So that’s pretty affordable.”

But with the lumber costs affecting the home prices, “that could take it out of what that single working mother would be able to qualify for,” Walsh said.

The reasons for the increase were highlighted during a virtual broker breakfast panel hosted by the Wilmington- Cape Fear Home Builders Association.

“Let’s use a technical term from economics: the lumber market’s crazy right now,” quipped Robert Dietz, chief economist for the National Association of Home Builders, who was one of the panelists during the Sept. 2 discussion.

He said the sawmill industry expected much larger declines in home construction as a result of the coronavirus pandemic, which hit the U.S. in March.

“What’s been surprising is we have not seen a rebound in production,” Dietz said.

Nationwide, sawmill employment lost 6,000 jobs at the start of the pandemic, he explained. “They only gained about half of those back, whereas in the building industry we’ve gained 80% of our job losses back.”

He said he’s heard concerns about social distancing in mills as possibly contributing to the lumber price issue, but he’s a little skeptical of that as an explanation.

“I kind of know what a sawmill looks like. It’s not a harder environment than say a food processing plant or other kinds of manufacturing facilities that seem to have overcome things,” Dietz said. “So if that’s the case, then why aren’t we seeing a ramp up in production to kind of tame some of these price increases?”

He said the answer is tariffs.

“There’s still an effective 20% tariff on Canadian softwood lumber; that’s where we get a third of our lumber supply in the U.S.,” Dietz said, “and so I think from a policy perspective, we need to temporarily suspend those lumber tariffs and get a new softwood lumber agreement with Canada . . . and then encourage and facilitate the domestic industry to produce more.”

“One thing that we’ve heard throughout a variety of industries is the expanded unemployment insurance benefits [$600 federal unemployment benefit] helped people pay the rent,” Dietz said, “and the income effect was really important, but it kind of has a negative substitution effect on reducing some of those people’s efforts to look for jobs. And so we need to provide the income support while enabling those industries that are hiring to go ahead and hire and I think if we accomplish those policy tasks, we’ll see some taming of these lumber prices.”

“We all went home for 90-plus days. Some people are still at home, and a lot of folks picked up remodeling projects while they were home during stay-at-home orders and that demand was unforeseen from the lumber mills,” said Cameron Moore, executive officer of the Wilmington- Cape Fear Home Builders Association. “That also had a direct impact on the number of board linear feet that was out there.”

And while construction and real estate was deemed an essential service in North Carolina, that wasn’t the case in some other states, Moore pointed out.

“You put all those together and it creates essentially a supply-and-demand perfect storm,” he said.

Tim Milam, president of Wilmington- based Coldwell Banker Sea Coast Advantage, was also part of the virtual broker breakfast panel and shared his take on the lumber price issue.

“I think one of the things that we need to continue to do in the real estate industry is educate and remind our agents that these price increases are not the builders’ wish to increase the prices, to increase their margins,” Milam said, “and we need to remember that the builders that are building all these homes have very slim margins in the first place.”

For new home contracts that have yet to be signed, Moore said, “there is an opportunity to raise prices but you’ve got to put it into perspective that it’s basically an inflated price; you’re trying to recoup the margin you lost because of the increase.”

At this point, Moore said, “everyone in my opinion is going to be part of the crisis, is part of the equation to try to present some solutions to it, whatever solutions can be presented right now.”