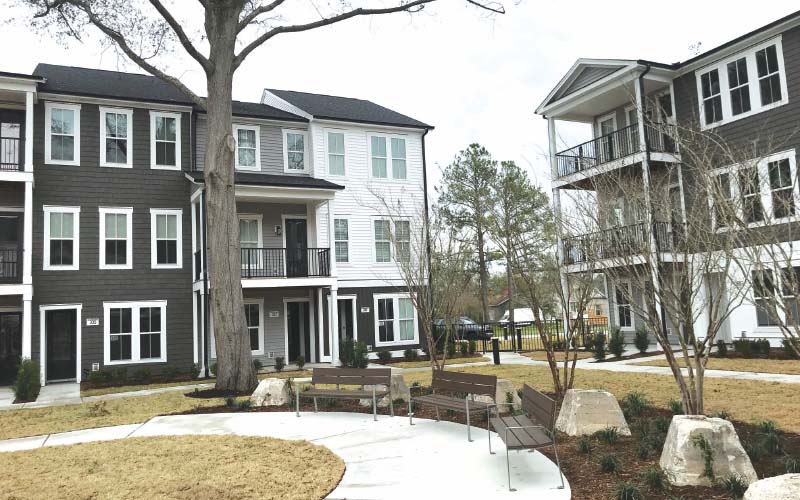 The custom homebuilder and founder of PBC Design + Build has created numerous townhomes in the Wilmington area, including several in downtown Wilmington and a couple dozen so far in Marina Village in the Riverlights master planned community off River Road. He considers one of his latest townhouse projects, Indie Ice Townhomes on North Sixth Street in downtown Wilmington, one of the projects he’s most proud of.

“We built 20 townhomes there in five buildings, and it’s a site we’ve owned since 2003,” Spetrino said. “We were trying to figure out what we were going to do [with the property]. Then finally we just figured, ‘You know what, let’s see if this will work.’ Not only did it work; it was an absolute success.”

The site is just over an acre, and the townhomes are 1,700 square feet with three bedrooms, three-and-a-half bathrooms and a one-car garage. They sold out in about two-and-a-half weeks, Spetrino said, with prices that ranged from $239,000 to $295,000.

Typically townhomes are a smaller segment of the housing market than single-family homes.

According to the 2019 Profile of Home Buyers and Sellers by the National Realtors Association, 83% of homebuyers purchased a detached single-family home, 6% purchased a townhouse/row house and 5% purchased an apartment or condo.

But construction of and plans for townhomes and other attached housing types have been on the rise in the Wilmington area as land prices increase and a push for higher density continues to gain momentum.

“I think there’s a lot of townhomes being built that are being built because that’s the only way that makes sense to develop the land because the land’s so expensive,” said Buddy Blake, Realtor and founder of Wilmington-based Waypost Realty. “There’s certainly a segment of the market that’s coming in for it [including retirees]. They don’t want upstairs; they don’t want yards” or other features that single-family homes come with.

“I definitely think that there’s a strong market for lower-maintenance, smaller residences,” said Tony Harrington, of the Property Shop International Realty and president of Cape Fear Realtors. “I think that we’re seeing an uptick of people downsizing.”

One of the latest plans involves a 22-unit townhome development on property at 4725 S. College Road, according to a community meeting notice posted on the county’s website.

Not only are plans in the works for new townhomes, but projects over the past several years have attracted investors.

The community appeals to retirees, said Adam Cohen, president of Spyglass Capital in 2018. They’re “the largest source of migration to the area, who want single-level living with no neighbors above or below in a location that’s closest to the area’s premier beaches,” Cohen said.

The sizes and prices of townhouses and condos vary widely, Harrington said. Certain townhomes can cost as much or more than a single-family house while others are suitable for entry-level buyers.

“It can be a very wide range,” Harrington said. “But I think most that move into a townhouse, condo or duplex like to have less maintenance that they’re having to keep up with.”

Such housing types have been more common in some recent plans.

“We are seeing a lot of developers now seeking to do some form of attached housing, whether it be duplex or townhome or even multifamily in the county,” said Brad Schuler, senior planner with New Hanover. “Folks are trying to diversify the housing type that they have in subdivisions.”

In some cases they’re meeting pent-up demand. The parts of the population that at times favor townhomes can be retirees or millennials. Even though both have very different lifestyles in many ways, they do have the same preferences when it comes to minimizing and convenience that townhomes can offer, real estate industry professionals say.

“I can build a more narrow product and in return get my square footage and the number of rooms without needing a larger footprint or additional infrastructure,” Spetrino said.

Northern Brunswick County, one of the fastest-growing areas in the state, is also among the region’s areas that are attracting townhome development. Ibis Landing, at the corner of Carol Lynn Drive and U.S. 17 in Leland, is expected to have 11 buildings with 123 townhomes on about 19 acres.

“We built them because we felt like from the feedback we got from the builders we work with was that’s a good area for townhomes, and there’s a need for townhomes that wasn’t being met,” said Tom Smith, one of the member-managers of Buster Development LLC along with Steve Shuttleworth. “And that’s a developing area. There’s going to be a mix of product in Leland because it’s growing very rapidly.”

The mixed-use project is also planned to include commercial development on about 10 acres.

The only tenant announced so far is Tractor Supply Co, with an anticipated opening this year.

The retailer is expected to occupy 19,000 square feet on more than 3 acres in Ibis Landing.

Tractor Supply Co. is a retail chain that offers home improvement, agriculture, lawn and garden, livestock and other products, according to its website.

“It’s nice to have something like retail next to the townhomes that they can walk to,” Smith said. “Tractor Supply provides a lot of retail they can use on a daily basis.”