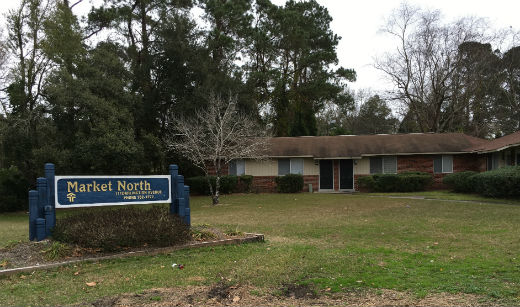 The Foundation for Affordable Housing, based in Laguna Beach, California, bought Market North Apartments in Wilmington on Dec. 10 for $14.7 million. (Photo by Cece Nunn)
An organization based in California bought property in Wilmington this month as part of a $63 million portfolio purchase.

“The foundation has been in business for over 25 years now, and our mission is to create and preserve affordable housing throughout the country,” said Darrin Willard, COO of FFAH. “Our goal with [Market North Apartments] is we’re going to own this long-term, preserve the affordability there.”

The foundation will address any immediate repairs needed at the Section 8-subsidized rental units and also plans to take care of future needs, Willard said. PK Management will continue to manage Market North Apartments and the other eight properties the foundation just bought in North Carolina.

“It really is a long-term hold and where we just want to maintain the high quality of management, continue to keep the property in its current physical condition and improve on any items that we can,” Willard said.

Market North was one of nine properties throughout North Carolina, all sold by the same owner, and three in Missouri that were part of the total portfolio purchase by FFAH. The foundation used money from 501(c)3 tax-exempt bonds issued by the Public Finance Authority of Wisconsin.

In advance of the new purchase, FFAH also just sold two multi-family properties of 442 units in Charlotte that the foundation had owned for a little over 10 years, said Deborrah Willard, who along with Tom Willard, is president and founder of FFAH. Darrin Willard is their son.

“Wilmington is such a beautiful place, a delightful place for people to live. We’re very excited about being owners in Wilmington,” she said.

Buying and preserving existing affordable housing makes sense financially, environmentally and for the people who are currently living there, Deborrah Willard said.

The Wilmington City Council had unanimously agreed in August to approve the bond issue by Wisconsin’s Public Finance Authority that covered the FFAH’s Market North purchase. The approval was a necessary legal step, but the city has no financial obligation related to the bonds.

Suzanne Rogers, community development and housing planner for the City of Wilmington, said in general, the city is “always pleased to see responsible, affordable housing developers in either the production of new units or the redevelopment, renovation of existing units to maintain the quality of affordable housing.”

City and county officials, along with the leaders of nonprofit organizations and business groups, have been discussing the need for affordable housing in the Wilmington area in recent months. But officials emphasize that the term “affordable,” generally defined as housing costing no more than 30 percent of income, applies to all income levels, not necessarily only those renters who need Section 8 housing.

Rent for Section 8 housing, like Market North Apartments, is subsidized by the U.S.  Department of Housing and Urban Development. Deborrah Willard said for a while, HUD was awarding much shorter contracts for Section 8 housing, and as a result, losing a lot of it as the units were converted to market rate rents.

“HUD is now trying to get people to preserve it, and they’re starting to give longer contracts again,” she said.