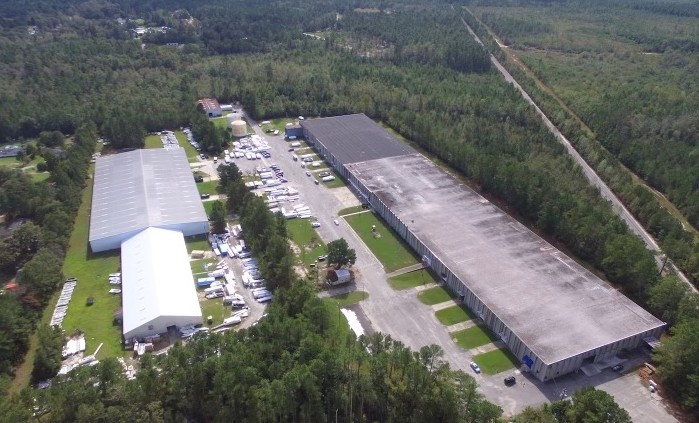 Investors recently paid nearly $10 million for a warehouse and distribution facility with multiple buildings in Leland. (Photo courtesy of Hansen Matthews)
Investors recently bought a 320,000-square-foot warehouse and distribution complex in Leland for nearly $10 million, capitalizing on a continuing trend in the Cape Fear region.

Their Leland buy, at 9101 Lackey Road, includes multiple buildings and is situated on a rail spur on 97 acres fronting Mount Misery Road, near the former DuPont manufacturing plant, according to a news release. The facility is fully leased, and the largest tenant is Hardwoods Specialty Products, a wholesale distributor of hardwood lumber, plywood and other building materials.

"They've had a lot of interest in this area for more investments so this property really fit what they’re looking for. It’s a good income-producing industrial property, with room to grow and a lot of good tenants," Phillips said. "They felt confident moving forward with the deal."

The facility, sold by Brunswick Industrial Warehouse LLC, was originally built in the 1970s to warehouse and distribute products manufactured at the local DuPont plant, said Hansen Matthews, one of the partners in the selling entity. Matthews, who is also a partner in Wilmington-based commercial real estate firm Maus, Warwick, Matthews & Co., did not participate in the Leland sale as a broker.

He said the sale comes on the wave of a construction boom of new big-box distribution warehouses in Brunswick, Pender and New Hanover counties. More than 2 million square feet of large warehouse projects have either been finished or announced in the three-county area over the past two years, Matthews said.

"The market for income properties is extremely strong now and when these buyers approached us with a solid offer, then we decided that now was an optimum time to sell," Matthews said in an email. "It's been an adventure over the past 17 years, and we would like to acknowledge the support that we've received from Brunswick Business Development and the other economic development organizations within our region."

In one of the most recent announcements, officials said Amazon plans to build a 142,000-square-foot distribution center at Pender Commerce Park.