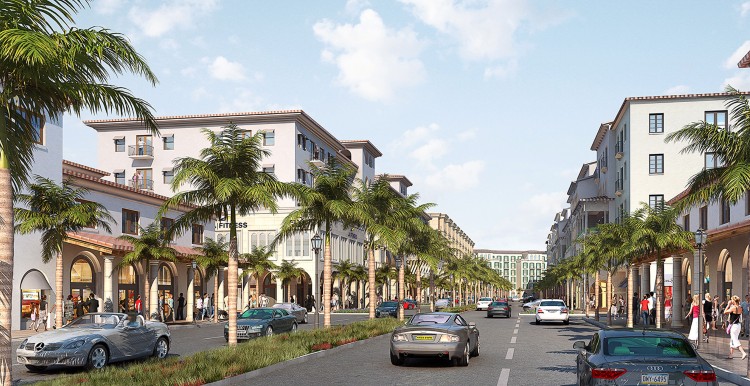 A rendering shows The Avenue, a more than $200 million high-end development planned for a site on Military Cutoff Road. (Rendering courtesy of The Carroll Companies)
Plans for The Avenue, a more than $200 million development to be built on Military Cutoff Road in Wilmington, are proceeding but could include some changes, particularly to what gets built first, as a result of COVID-19.

Roy Carroll, owner of The Avenue development firm The Carroll Companies, said in a recent interview that construction on the development’s anchor, a Westin hotel, will likely be delayed as a result of a pandemic-related slowdown in the hospitality industry.

“We continue to be concerned about starting a $90 million hotel with the hotel industry like it is right now,” Carroll said.

The Westin, with more than 230 rooms, will still be built, along with a spa and conference center, but construction would likely start in a later phase of the multi-phased project, he said. In a newer plan for an upscale spa on the property, the spa could be located on an island in a lake built next to the hotel and connected by a bridge.

Site plans for The Avenue submitted in 2019 showed 10 buildings, along with three parking decks. The buildings would include more than 115,000 square feet of retail space and more than 500 apartments.

For the Westin, a question remains about when certain segments of the travel industry, including business travel, could bounce back, Carroll said. The wedding business is also expected to be a large part of the Westin’s room rental, along with vacationers, Carroll said.

Instead of starting with the hotel, he said, crews could begin by working on residential space in buildings that would be located in the back of the 44-acre site.

But another potential change for the project is the amount of retail space allocated, which has been planned to be located on the first floor of some mixed-use buildings, with apartments on the top floors.

“We've got a good amount of retail planned for the project. And retail right now is also suffering. So we're taking an in-depth view of the retail and what is needed in that market right now,” Carroll said. “There's not many retailers out there looking for new storefronts today so, do we want to go out and spec tens of thousands of square feet of retail in today's climate?”

That's an example of the questions The Carroll Companies, a Greensboro-based firm, is considering, but there won’t likely be wholesale changes to The Avenue’s plans, Carroll said.

“We're anxious to get started,” he said. “It's just COVID has changed the world a little bit, and we're trying to make sure that our plans and what we're trying to do make sense in a post-COVID world.”

Two-story building in the works for Racine Drive