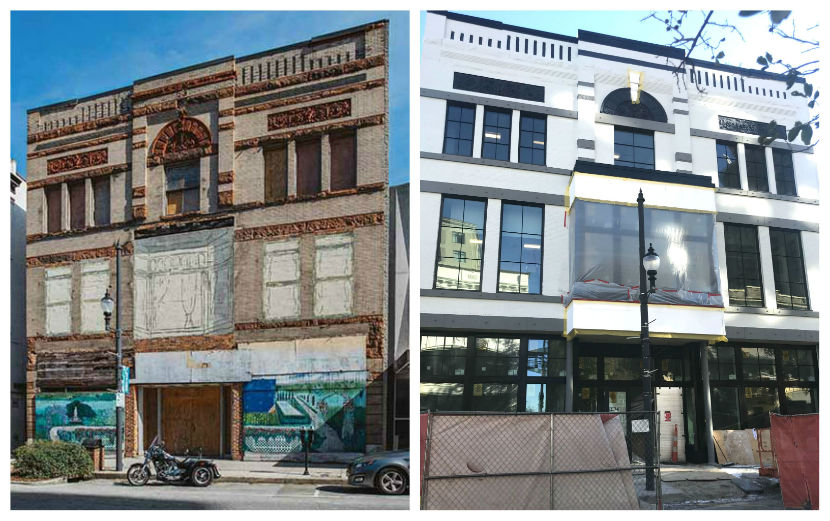 Before and after: The Gaylord Building (shown previously at left) is in the process of being renovated and restored, by East West Partners and its general contractor Monteith Construction, into a coworking space for Common Desk. (file; photo by Cece Nunn)
The historical building at 226 N. Front St. in downtown Wilmington could be welcoming office users by January, if construction continues as planned.

That's according to an update provided Wednesday by officials with building owner East West Partners, which is also the developer along with the city of Wilmington of the 13-story mixed-use project across the street, River Place.

McKay Siegel, project manager with East West Partners, described what has been a labor of love for East West in restoring the more than 100-year-old building, which is being turned into coworking space for Dallas-based Common Desk.

Wilmington is the first North Carolina city where Common Desk is claiming a presence, although construction is expected to get underway soon on a Common Desk location in Raleigh.

"Our intention is to continue to expand throughout the Southeast. We have no intention any time soon to be coast-to-coast," said Nick Clark, CEO of Common Desk, on Wednesday. "We really love some of these smaller towns that have a vibrant economy that's going on but have a sense of community already.

"There's a lack of coworking, I believe, in the Wilmington area right now as opposed to some of the bigger towns. You've got a few smaller operators, but nobody doing it on a larger scale. And I think there's a huge need for it, which is what we've seen with marketing efforts over the last couple of months."

Opening the space in an older building boosts the appeal, he said.

"As a brand, we love anything that screams authenticity, and that building definitely does that, with it being a little over 100 years old. It tells a story in and of itself. I know that the construction crew and East West as we've been building Common Desk have found different artifacts within the building that tell their own story, which is really fun," Clark said. "You know it's important with any coworking brand for there to be a story in anything that we're building, so that people that walk into a Common Desk location are able to kind of latch on to not just the Common Desk brand but the building."

The structure at 226 N. Front St. had been vacant since it was condemned in the late 1980s. At one time a tree was growing inside it. General contractor Monteith Construction demolished the insides down to its four walls.

East West has reclaimed some of the wood that was inside the building, including floor joists, to use as shelving and stair treads after it was refinished by the participants of nonprofit organization Kids Making It.

Siegel said he and Lucien Ellison, managing partner with East West, often talk about the two different projects East West is working on in downtown Wilmington.

"We have River Place, which is a ground-up, new build, which is, in a lot of its own ways, revolutionary for downtown Wilmington. And I think that that building does its best to pay homage to the history of downtown without trying to stand out too much or be real flashy.

"I think it fits in well with the surrounding architecture," Siegel said. "And then you've got [226 N. Front St.] across the street, which is the history of Wilmington. It's cool to have a type of downtown where we can impact it in a new way and an old way and be respectful, keeping the characteristics of downtown Wilmington alive."

Another of the features East West has restored is the bay window jutting from the facade of the building, which looks out at River Place and through Bijou Park down to the Cape Fear River.

Inside Common Desk, amenities are planned to include a hospitality bar that will serve coffee, conference rooms, office suites, common breakroom space and more.

Common Desk will fill 22,000 square feet and offer different levels of coworking memberships. A shared space membership starts around $195 a month, with dedicated desk offerings in the range of $300 to $400 a month, private offices starting around $500 a month and suites falling into a $400 to $500 per desk rate.

The Common Desk location could also be used for event spaces, for example for some of the growing tech companies in downtown Wilmington.

"Not only is there a lack of coworking product in Wilmington, there's also a lack of office product and in general, and so I think there's a way for Common Desk to really meet a need there within the community," Clark said, "as well as providing the town with some great optionality when it comes to flexible office offerings, especially as we're heading into hopefully pretty soon a post-COVID era of people heading back into the office."