'Great Spaces' From The Hipp 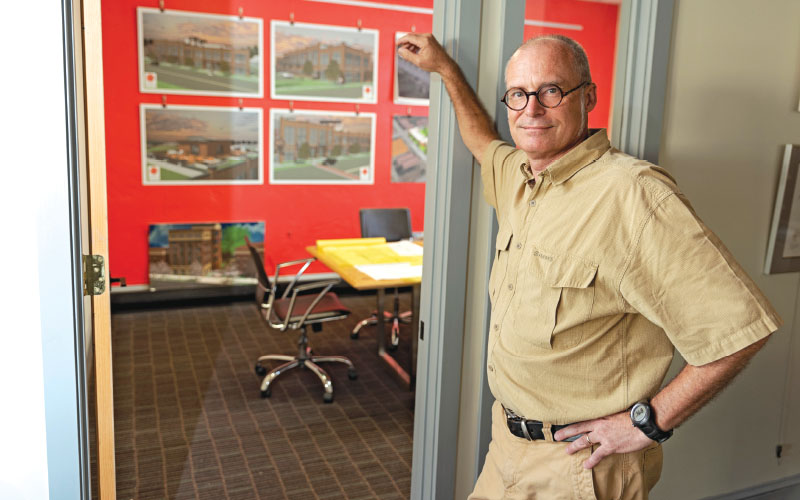 Architect Clark Hipp, president of Hipp Architecture & Development, bought the building at 228 N. Front St. that includes his firm’s office in 2006. (Photo by Michael Cline Spencer)
Clark Hipp walks to work every day, a fact he’s enjoyed for more than three decades. The architect and downtown property owner, also known as J. Clark Hipp, moved to Wilmington from Charlotte in the 1980s, and although he tries to avoid talking about it, others note his contributions to the revitalization of downtown Wilmington.

“I’ve been in and out all these buildings … I bet if you looked in the CBD [Central Business District], at least on this side of Third Street, I’ve probably worked in or been involved in a third to a half of all the buildings in some way, shape or form,” he admits, after some prodding, in his office at 228 N. Front St.

Hipp said he knew from a very young age that he wanted to create buildings.

“As a teenager I visited the St. Louis arch and Dulles airport, both of which gave me a sense of awe. I then found out that they were both designed by the architect Eero Saarinen. I was also an artist and enjoyed sketching, mostly buildings and landscape. I have kept most of these sketchbooks and often bring them out to show young interns or high school students who come ask about being an architect,” he said. “I always encourage them to develop a creative skill, like sketching, painting, music, anything that will engage the ‘right side’ of the brain.”

Hipp’s purpose in moving to Wilmington: to work for legendary architect Ligon Flynn. In the Wilmington area, Flynn is known for designing iconic Figure Eight Island homes, as well as downtown projects, including Chandler’s Wharf.

At first, “he wouldn’t hire me,” Hipp said. “But I stayed anyway and kept pestering him.”

Hipp worked for him for two and a half years.

“He was a mentor. I really appreciated his friendship over the years,” Hipp said. “And as I told him when I left, I said, ‘Ligon, even though I worked 70 hours a week for you, I got a lot more out of you than you got out of me.’ I learned a lot.”

One of the numerous projects Hipp has been involved with is The Promenade, an office development that replaced a junkyard in downtown Wilmington that was partly bordered by North Fourth Street.

Hipp said he believes the redevelopment of that block “was the genesis of the redevelopment” for North Fourth Street. The project was financed by homebuilder Dave Spetrino and developer Dave Nathans.

“I was a young architect and they said, ‘Clark, what can we do with this piece of property?’” he said.

“It was a real departure, and we had to work with the city … The reason it’s called The Promenade is that when I looked at it, there were two beautiful old trees, but they were right in the middle of the property,” Clark explained. “They weren’t on the edge of the property, but I wanted to engage those in the overall design. So I created that interior sidewalk. The city didn’t want that. To the city, the sidewalks were supposed to be on the outside, but we created that to save those trees and to make that pedestrian pass through the block, which really is not very common.”

Spetrino said, “Clark has been invaluable to our community, both in the forefront of progress as well as behind the scenes. His willingness to commit his time and professional expertise to downtown, like many others, is really what makes me most proud to know Clark.

“His approach isn’t ‘I’ll do this, but what do I get in return’ but instead, ‘Put me in, I want to help,’” said Spetrino, founder of PBC Design + Build.

These days, among Clark’s projects is a mixed-use development that would bring new purpose to a piece of property that’s been unused for decades.

Called NoFo Lofts, the project would be built on a site bordered by North Fourth, Davis and Cowan streets. The multimillion-dollar plan is to create a residential and commercial building that mimics the historic nature of places like Brightleaf Square in downtown Durham, Hipp has said.

Hipp met his wife, Susan Dillard, in downtown Wilmington. He was renting a house at Sixth and Dock streets and she was living at Fifth and Dock.

The couple has a 31-year-old daughter, Hannah, and a 27-year-old son, Starke, and Susan and Clark have lived downtown in the same house for more than three decades.

“When we first started living there, in the late ’80s, it was sketchy,” Clark Hipp said. “Since then we’ve seen a lot of positive. We’ve got great neighbors, most of whom have been there for a long time.”

These days, Clark Hipp continues making plans to aid in the rejuvenation of downtown spaces, including a defunct former Wave Transit property that’s owned by the city of Wilmington on Castle Street.

“He has taken on many challenging projects, thought outside the box,” Spetrino said, “and used his many relationships with others in our community to solve problems or create great spaces.”