NCino Leases All Of Sixth And Final Mayfaire Office Building 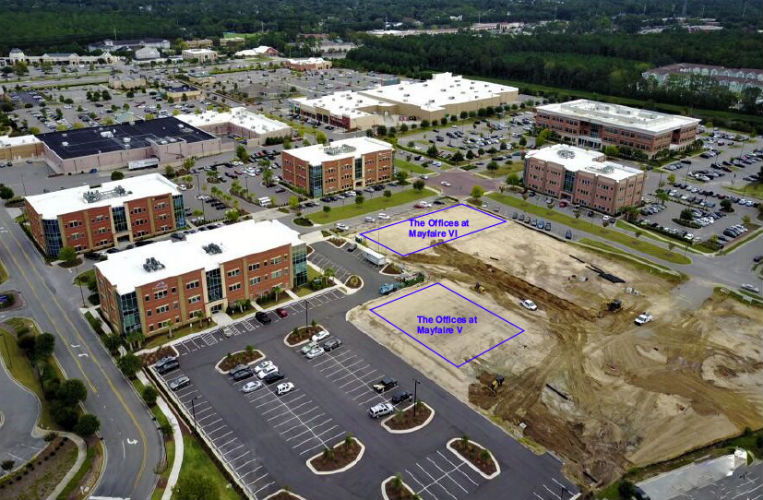 Banking software firm nCino is leasing all of The Offices at Mayfaire VI, the final office building in a series that is expected to be complete in 2018. (Photo illustration courtesy of Steve Anderson)
Rapidly growing banking software firm nCino has leased an entire Mayfaire office building, the last in a series of six, for which construction will start this year, officials announced Tuesday.

A spin-off of Live Oak Bank that was founded in 2012, nCino will occupy all of the 40,000-square-foot Offices at Mayfaire VI. As a result the firm's footprint will include space in three office buildings in the Mayfaire area. The company has grown from 350 to 375 employees since September.

"We are proud to have our global headquarters in Wilmington, N.C., and look forward to remaining in our current building on Parker Farm Drive while expanding our presence in the Mayfaire area and continuing to support our local community," said Natalia Moose, public and analyst relations coordinator for nCino, in an email.

"In response to unprecedented demand, Wilmington developer Steve Anderson begins construction of his final two Mayfaire office buildings on Parker Farm Drive ahead of schedule," according to a news release from Anderson.

Mayfaire V is also fully leased, and Anderson said he plans to announce its tenant soon. A groundbreaking ceremony for The Offices at Mayfaire V and VI will be held Nov. 9  at 6751 Parker Farm Drive.

“I never thought we would be building the last two buildings at the same time. We’re just so grateful for the market acceptance we’ve had at Mayfaire,” Anderson said in the release.

Once constructed, the fifth and sixth Offices at Mayfaire buildings will complete the Class A business park, which totals nearly 250,000 square feet of leased/sold office space.

“Being able to develop two buildings for 70,000 square feet at the same time that are fully leased pre-construction is a great indicator of Wilmington’s growing market,” Anderson said in the release.

The Offices at Mayfaire began in 2011 with Mayfaire I. McKinley Building Corp. is the contractor for all six Mayfaire office buildings, and Brandon Lisk is the project manager.

Steve Hall, partner in Maus, Warwick, Matthews & Co., is the listing agent for the Offices at Mayfaire IV and V. The architecture is by Cothran Harris and engineering by Tripp Engineering.