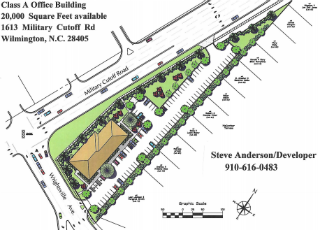 “The building’s 20,000 square feet. If I add everybody up that is actively talking to me about this building, I have 25,000 square feet of interest,” developer Steve Anderson said Monday.

An insurance company is expected to buy 5,500 square feet on the first floor of the two-story building, located on a 1.8-acre piece of property at 1613 Military Cutoff Road. Anderson has the land, currently owned by Vernell Green, under contract with Lon Edwards, a broker with Worsley Real Estate.

“This lot has always caught my eye because of the road exposure, the stoplight and the proximity to the beach,” Anderson said as he talked about plans for The Offices at Airlie on the site Monday. “The market confirmed what we thought all along, that this would be a great, great site. The timing is right.”

Site plans completed by Tripp Engineering for The Offices at Airlie are expected to be reviewed by the city’s Technical Review Committee at its April 16 meeting. The architect is Cothran Harris and the builder McKinley Building Corp. A dilapidated house currently on the property would be demolished, according to site plans submitted to the city.

“My goal is to start this and be able to have it available the end of this year to the first of next year,” Anderson said.

Anderson was the developer of more than 114,000 square feet of office space in three buildings for the Offices at Mayfaire, and the response to the design of those buildings has been so positive, Anderson said Monday, that The Offices at Airlie will incorporate the same style of bricks and blue-tinted glass.

As plans for The Offices at Airlie proceed, Anderson said additional office space at Mayfaire is in the design phase.