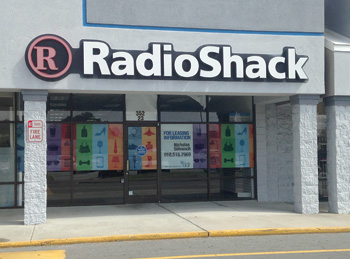 RadioShack's filing for bankruptcy means the closing of two of its stores in Wilmington, which will add to the commercial real estate inventory. (Photo by Cece Nunn)
Retail trends come and go, and the same can be said for some of the companies that reap their benefits, experts say.

“You find a niche, it works for a while, and then consumers move on to something else,” said Tracy Meyer, chairwoman of the marketing department at University of North Carolina Wilmington’s Cameron School of Business.

“Very few companies are able to evolve and change and keep it up over an extended period of time. It takes a lot of guts to make the changes year in and year out to stay with it,” Meyer said.

But despite the recent closings of some national chain stores throughout the U.S., including two RadioShack locations in Wilmington, some experts and members of the local business community  predict that future national chain closures aren’t likely to have a dramatic impact on the Port City’s commercial real estate market.

“I have heard quite a few of the national stores in Wilmington are actually very happy here, that they’re some of the top-performing stores in their chain,” said Meyer, who sometimes hears about the state of national chains from students employed by them. “It’s anecdotal, but it seems like Wilmington really embraces the larger stores.”

Online shopping is one of the major factors, national experts say, in the current woes and shaky forecast for some major retailers that have Wilmington locations, including Sears, J.C. Penney and Staples.

Adapting to a new environment created by Internet sales is key for any business that wants to stay in the retail game, Meyer said.

“If companies aren’t able to do the research, gather the data, watch the competition and make changes, truly strategic changes, they’re going to be left behind at some point because online shopping has really added a whole different competitive element. It gives people a lot more choices,” Meyer said. “There’s always going to be a segment of the market who wants to go in the store and shop, and there’s going to be another segment that’s just as happy buying everything online.”

In the case of one of the former RadioShack locations, at University Centre on College Road, the store’s closing presents “an exciting opportunity for somebody to come in and join an incredible roster,” said Nicholas Silivanch, partner and vice president of retail at Eastern Carolinas Commercial Real Estate, who is the leasing agent for University Centre.

He said University Centre rarely has that much space, about 2,200 square feet, open up.

“I believe a national retailer will be the most likely candidate for the space, and it’s who we’re targeting right now,” Silivanch said.

RadioShack filed for bankruptcy in February, and while the University Centre store closed not long before the bankruptcy announcement, the RadioShack at Independence Mall was one of more than 1,700 stores across the nation on a company list of locations expected to be shut down by the end of March.

Growth and transition Nationwide, retail sales growth is one of the factors that has led to an increase in investor confidence in the commercial real estate market, according to a survey conducted by California-based Marcus & Millichap and National Real Estate Investor.

Of the survey respondents, 56 percent of investors in retail properties said they expect to see gains in their portfolio values over the next 12 months.

At Mayfaire Town Center, January sales showed a solid increase over 2014, said Mayfaire developer H.J. Brody. Although he does not comment on specific tenants, Brody said, “We’ve had our 10-year anniversary, and the substantial majority of tenants have renewed their leases for many more years to come.”

As he conducted research for the city of Wilmington in regards to the impact of Riverfront improvements on commercial real estate, Ed Graham, professor of finance and real estate at the Cameron School of Business, said he found that the increasing popularity of town centers is evident in cities across the country, particularly in the Southeast.

Places like Mayfaire, and a similar development in Jacksonville, Florida, called St. Johns Town Center, have the ability to lure existing and potential commercial tenants away from smaller shopping centers and indoor malls, Graham said.

But the Internet seems to be having a bigger impact on smaller properties, Graham said. Internet shopping trends that have led some national retailers to change tactics seem also to be affecting mid-tier and smaller strip centers in Wilmington and beyond.

“What the strip centers are going to start to do is, they’re going to cater to service providers,” such as dance studios, health spas, lawyers, mortgage brokers and accountants, Graham said, adding that some local centers have already done just that.

At the same time, new shopping centers anchored by top retail payers in the grocery store sector can attract other niche players.

Businesses with a national presence that need brick-and-mortar locations, such as grocery stores, beauty product suppliers, hair salons, and discount and consignment stores, are likely to continue to expand in the area, Silivanch said, who also predicts the need for more retail space as local retail vacancy rates continue their downward trend.

“I have great hopes and expectations and positive feelings about Wilmington real estate in general,” Graham said. “The concerns I hold for the retail sector in general nationwide I don’t hold with quite such intensity in Wilmington.”