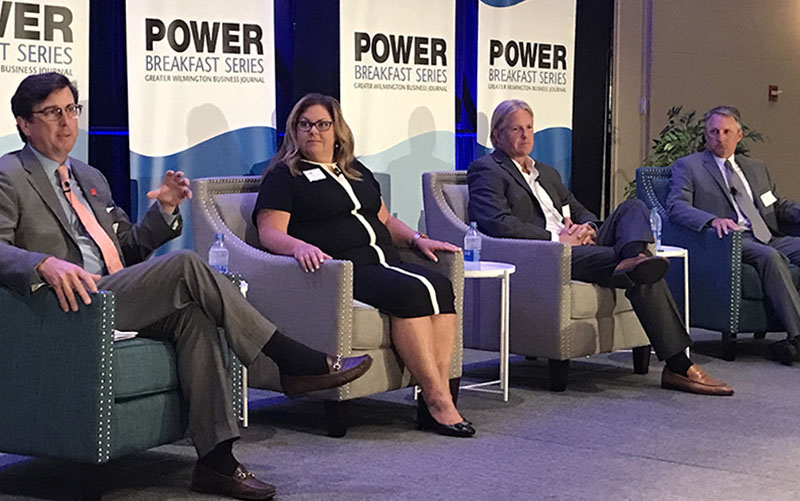 A panel of local real estate leaders discussed the current market trends and outlook for the region when it comes to residential, commercial and industrial markets. (Photo by Vicky Janowski)
Despite some of the construction material and labor shortages that those in the real estate industry have been experiencing, demand and investments in various real estate sectors remain high.

That is one takeaway discussed at Tuesday’s Power Breakfast hosted by the Greater Wilmington Business Journal.

The breakfast, “The Roaring 20s,” brought a panel of those in the regional residential, commercial and industrial real estate markets to catch up on projects and the booming market.

The lumber shortage, caused in part by a slowdown in production and increase in demand during the pandemic, is not the only shortage that locals in the real estate market have experienced, Tucker said.

Norvell, whose work is in the development of industrial projects, said one key challenge has been steel costs.

“If you didn't get your steel order in last year, around November, December, you're looking at some cases almost twice what your steel cost was going to be,” Norvell said. “Steel and concrete are the two primary components of the buildings that we're building, it’s a huge impact.”

Other areas of shortages include some less apparent ones like paint.

“I was in Atlanta yesterday, had a meeting with a contractor there talking about projects there... I heard something I hadn't heard before,” Boney said. “They are having projects go into delay because of production issues with paint. It's not one sector, it's every sector.”

Another key issue is labor shortage, he added.

“Labor is such a huge issue for the industry. I see that as one of the biggest issues we have to face, particularly in Wilmington, it's getting people to come here that have that skill set,” Boney said.

With a small pool to draw from locally, many are having to attract talent from out of the region, Tucker said.

“We don't want to steal talent from other companies because we want to be good neighbors but on the flip side of that, we have to convince someone who has a wife and three kids to move from Norman, Oklahoma to Wilmington and hope it works because it is a smaller town and if it doesn't work out they have to either find something that they may not have moved here for or they're going to have to move again,” he said. “Trying to get that right person that is going to work out is very difficult.”

Another item discussed was housing affordability, which impacts everyone, according to the panel.

“The issues of economic disparity that we have in the community affect every aspect of the economy all the way upstream,” Boney said.

Rising costs in building homes have caused an increase in home prices, which is something the community has to tackle, Gardner said.

“You've taken something that maybe initially could have been offered at $175,000 or $200,000 and you have now added another $50,000, $60,000 or $70,000 onto the project,” Gardner said. “And that's irrespective of the spike in lumber, appliances, windows, et cetera. So, from a regulatory standpoint, that truly is setting the stage for affordability to not even be an option for projects.”

Ways to promote housing affordability should include bond referendums, tax incentives, and structured programs that are publicly sponsored, Boney said.

“I think there's got to be a public incentive to these developers to put more affordable housing in place,” he said. “If you don't put money in front of the development community, it's not going to follow. It's just that simple. We can't mandate our way out of this.”

Despite some of these challenges, many investors are eyeing Wilmington for developments.

Boney said there is a lot of interest in multi-family developments and that he has talked to more investors and developers over the last six months than any other period he can remember.

“If you are looking at markets in the southeast, Charleston is too expensive, Myrtle Beach is overbuilt, so they look at Wilmington,” Boney said. “Wilmington is a great market for a lot of these people [investors and developers] right now, particularly from the Northeast.”

In addition, while some predict that demand for office spaces will go down due to remote working during the pandemic, panelists said the outlook is not actually trending down.

"Reports of the demise of the office are greatly exaggerated because the office is back in a big way and I would bet on that years going forward," Boney said.

He pointed out that local fintech company nCino is currently working on a project to increase its office space in size and build a new parking deck.

An area for growth also includes downtown Wilmington, specifically, developments in the outskirt areas including the South Front District and Cargo District, and on the northern end, including the new Riverfront Park, formerly known as North Waterfront Park.