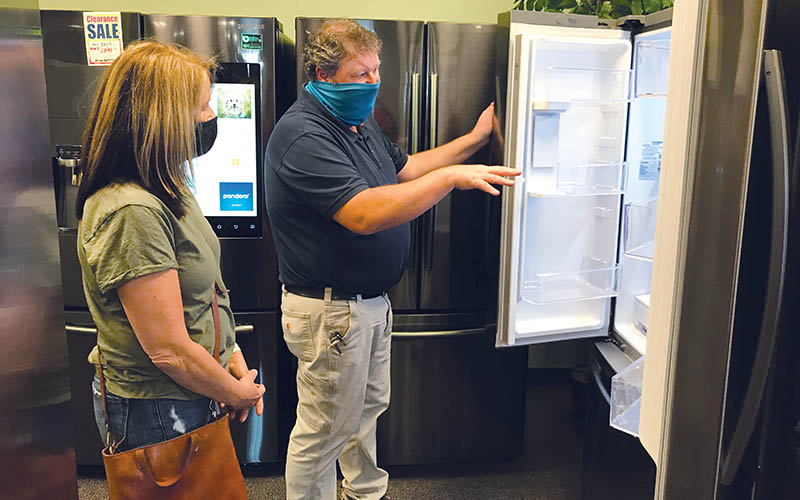 Sam Stetson (left) watches as Atlantic Appliance & Hardware employee Carl Bridgers talks about one of the store’s refrigerators. (Photo by Cece Nunn)
Appliance sellers find themselves explaining it over and over again, at times to overwrought customers.

“It” is an appliance shortage stemming from multiple factors, COVID-19 being the major one, that has been going on for the better part of a year and doesn’t show many signs of stopping.

The “perfect storm” of problems actually began before COVID-19 hit the U.S. last year, said Mark Edwards, one of the owners of Atlantic Appliance & Hardware, which has a showroom at 914 S. Kerr Ave. “The manufacturers for 2020 had predicted a little bit of a down cycle, thinking that sales were not going to be great,” Edwards said. “They thought they might be down a little bit from 2019. So they kind of set their numbers at a lower number to build products.”

Then along came the coronavirus pandemic.

“A lot of the plants had to shut down for weeks at a time due to COVID on the assembly line. And of course if one person had it, then they had to shut the whole place down for two weeks,” Edwards said. “So there was a lot of downtime due to COVID early, and then of course when they would come back to work, they had to social distance and rearrange things on the assembly line.”

While most appliances today are made using robotics, “there are still a lot of people on the assembly lines that [were previously] elbow to elbow. … They had to redesign assembly lines, and that took time to do and to figure out,” he said.

While there’s a shortage of most appliances these days, at the beginning of the pandemic, freezers were a big deal because of fears about a food shortage that didn’t happen to any major extent.

“Everybody in the whole world was looking for freezers, not just in Wilmington, North Carolina,” said Edwards, whose store had a freezer waiting list three pages long.

Of the appliance shortage in general, Kristi Johnson, manager of Island Appliance at 5946 Carolina Beach Road, said, “It’s a manufacturing problem; it’s not a store problem.”

But the stores get blamed.

“People don’t understand, and people are mean,” Johnson said. “They scream and yell and cuss at us like it’s our fault, like we have some control over it. ... I’ve been working here for 16 years, and I’ve never seen anything like this.”

Johnson said customers are told upfront that there’s a lot of availability issues. “If it’s not something that we have in stock, it can be 14 to 16 weeks before we can get something,” she said.

Another COVID-19 side effect that has contributed to the appliance shortage: people staying at home more to avoid crowds and because of past restrictions.

Edwards said, “People are stuck at home for weeks at a time, and they’re using their appliances more than they normally would because they’re not eating out ... They’re hearing noises coming from their refrigerator or their washer or dryer that they hadn’t noticed before, and they decide, ‘You know what, this thing’s 12 years old, 14 years old, it’s time to replace it.’”

The situation has come to the point where one manufacturer might have some products but then those disappear, and a salesperson spends half of his or her day chasing down another brand, Edwards said.

While dishwashers and Frenchdoor refrigerators seem to be some of the hardest appliances to find, the shortage is not brand specific, Johnson said.

“It’s everybody across the board,” she said. “Every brand out there is having availability issues.”

Components to build appliances are also at a premium now, including control panels, Johnson and Edwards said.

Although availability remains a problem even as COVID-19 vaccinations increase, appliance stores did have some good news in 2020.

“Even with all we had to put up with shortage-wise, we had the best sales year we’ve ever had in 2020,” Edwards said. “If [more] products were available, it would have been off the charts.”

Atlantic Appliance has three warehouses filled with appliances, but those are spoken for.

“A lot of it is product that’s waiting for new homes to be finished because there have been delays in windows and doors,” Edwards said, pointing to a shortage of building materials as well.

Island Appliance also had a warehouse filled with appliances when the pandemic hit, which tempered the bad news with some good news.

“Last year we had record sales because everybody was at home, they were remodeling, things like that,” Johnson said. “We were fortunate enough that we have a warehouse, and our warehouse was fully stocked.”

The record sales, however, depleted the store’s stock, she said.

The appliance situation is adding to the shortages already faced by homebuilders in lumber and other items. According to a February survey for the National Association of Home Builders/Wells Fargo Housing Market Index, nearly 90% of the builders responding said they had trouble obtaining appliances in a timely manner over the past six months, 51% to a major extent.

Whether the appliance situation will normalize any time soon remains to be seen.

“If you told me this time last year that it would be a year later and things will still be this bad, I would have said, ‘There’s no way. There’s just no way.’ But the demand is still outrageous,” Edwards said.

Johnson said manufacturers are “telling us that things probably will not be getting better until late summer, early fall.”