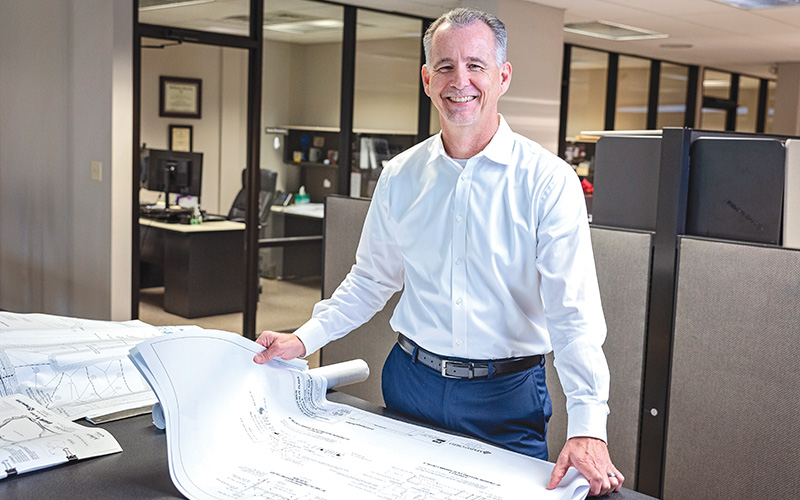 He has decades-deep relationships with utilities across the region, remaining intimately in tune with large-scale expansions and upgrades required to ensure infrastructure keeps pace with rapid growth.

Wilmington was the engineering firm’s flagship in 1978, and McKim & Creed has since added 24 offices across the Southeast, with over 700 total employees.

It’s hard to find a sizable public infrastructure project in the Wilmington region Boahn’s team hasn’t touched. “We’re very fortunate to work for basically every major utility in the area,” he said.

Despite the importance of the infrastructure he helps design, Boahn has managed to keep a low profile, coordinating with public officials behind the scenes to ensure projects meet expectations and serve the growing region.

This month, Boahn’s team will wrap up final testing of a repair they oversaw for LCFWASA’s damaged 48-inch water main – the raw water source hundreds of thousands of people in the Cape Fear region rely on. It was the second time the main was damaged in recent memory, with the previous break taking place amid then-record flood levels caused by Hurricane Matthew in 2016.

Boahn’s team and contractors managed to repair each leak – both severe in magnitude – without customers losing service.

The joint separations fortuitously occurred in areas that were somewhat accessible by machinery, as opposed to under the river – a scenario Boahn said would be catastrophic. When a section of the ’90s-era pipeline settled and separated in a swampy remote area in November, an estimated 30 to 35 million gallons a day gushed out. Within about two weeks, Boahn’s team’s 600-foot bypass workaround was in place, diverting water around the damage.

“It’s almost identical in how we approached it,” Boahn said of both leaks.

Following the 2016 leak, the firm had extra high-density polyethylene on hand from the first repair, which it used this time around, helping to speed up the installation of the bypass. “We were much more prepared for this one than we were … in 2016,” he said.

Along with State Utility Contractors and government partners, Boahn and the McKim & Creed team had to spontaneously make precise decisions to respond to the Matthew leak. “It was something that we all lost a little sleep over,” he said.

It was a stressful time, but it also marks one of the highlights of his career. “[It’s] something, you can look back and say, ‘We all did a really, really great job of solving the problem while maintaining service to customers,’” he said.

“I’m proud of our team, I’m proud of the clients … jumping on board, and everybody pulling together to find the right solution,” he said.

As part of the recent fix, Boahn identified potential weak spots along the river-crossing portion of the regional water main, and local officials are exploring options to address them to avoid a devastating leak.

Given the magnitude of the team’s responsibilities in overseeing public systems – especially the region’s access to running water – they operate in an on-call nature, 24/7. “We pride ourselves on being responsive,” Boahn said.

The team’s design for infrastructure at New Hanover County’s Blue Clay Business Park – which could lure 1,000 jobs and roughly $2 million in taxes for the county annually upon full build-out, estimates show – will be in the ground by this summer, should contractors stay on schedule.

Another infrastructure investment that will spur economic opportunities in the region is underway in Pender County. McKim & Creed just got the greenlight to design utilities along U.S. 421 up to Blueberry Road in Currie to service a still-unknown major development project.

McKim & Creed is in expansionary mode, eyeing new hires and potential mergers and acquisitions to help the firm grow organically. Within his water division, Boahn oversees a team of 45.

“He’s created a really unique culture within his own group within the company,” said Kristin Beamer, McKim & Creed’s marketing director. “Tony’s really successful at being able to recruit some really great talent.”

“We want to provide more than just, ‘Hey, come sit in a corner and work on a project,” Boahn said. “We want people to be happy and enjoy what they do.”