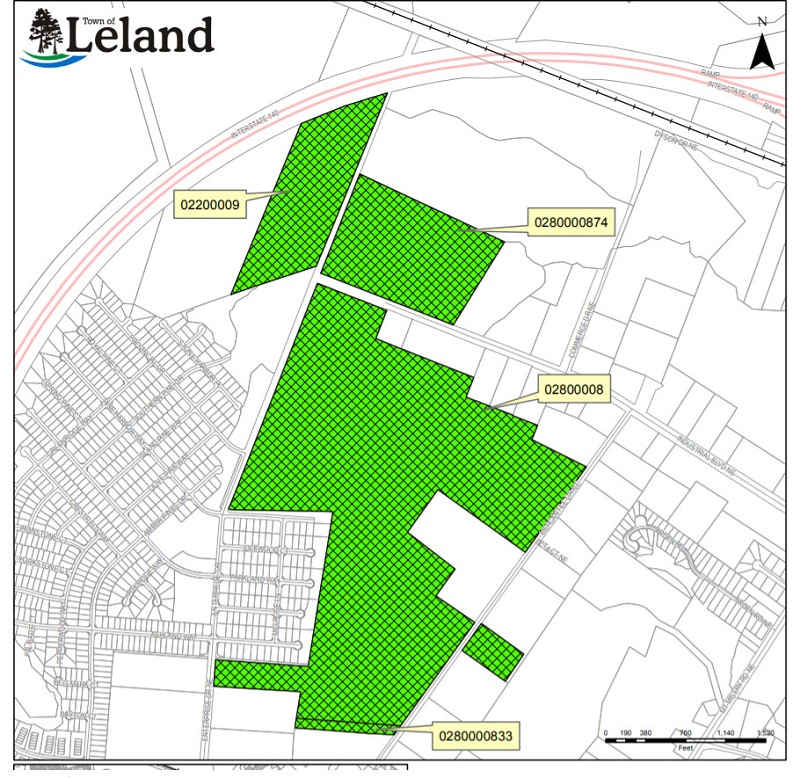 At its meeting Thursday night, the town council voted unanimously to approve a request by WCM Enterprises LLC, the landowner, to allow the annexation of 225 acres of industrial land into town limits, said Gary Vidmar, the town's economic and community development director, on Friday.

An initial zoning ordinance, called innovation district, for the land was also approved by the council's unanimous vote Thursday, he said. The new zoning, while being utilized specifically for the 200-plus annexed acres, could also be used anywhere by the town in the future.

While the voluntary annexation comes following years of local efforts to find ways to improve the Leland Innovation Park, the name with which the land is currently being marketed by Wilmington-based commercial real estate firm Cape Fear Commercial, he said.

The annexed land is a significant chunk of what's been previously referred to in the past as the roughly 600-acre Leland Industrial Park.

Leland Innovation Park Inc. (LIP) had formed two years ago as a private nonprofit group aimed at improving, marketing and promoting the park with government and economic development partners.

Town officials, along with other area representatives and economic developers, have played a role on the LIP board and its discussions over the years to carry out that mission for the park.

"This is a progression of those discussions. And we are really excited at the opportunities that this is going to provide for the town," Vidmar said.

The land has the potential to bring in innovative and emerging industries and high-paying jobs and significantly increase the tax base of the town, he said.

The permitted uses in the innovation district are "far more restrictive" than what the uses have been in the previous industrial zoning, Vidmar said.

"We believe what we have been able to do is give a property owner much more flexibility to maximize use of that land for their new facility without compromising quality and the town's desires to make this an attractive park," Vidmar said. "We also realized that by doing this, we will also attract smaller businesses ... it is not our desire to create an industrial park for the old smokestack ... industries -- those are more appropriate for other locations."

Vidmar said for the innovation park and the new zoning, the town aims to also attract smaller businesses and even startups, "giving them the flexibility to put up a smaller building on a small lot," he said.

"Those are the kinds of businesses we want to see. And that's the discussion we've had ... is attracting small high-tech manufacturing businesses, not the behemoth manufacturing companies," Vidmar said.

In the new innovation district zoning, the town has also incorporated, among other things, a requirement that some of the park improvements and planning, such as street lighting and landscaping, be planned with new buildings or new facilities, he said.

"So incrementally as this land is developed with new projects, you'll begin to see some of the improvements along the roads in that park that our LIP board has been talking about," Vidmar said.

Overall, Vidmar said, town officials are excited for the potential of the land and the opportunities it might bring for Leland, and for the new zoning to bring about the changes that have been eyed for park, adding, "This is a culmination of a lot of work over the last two years all coming into fruition."