Leland Could Annex 200 Acres Zoned For Industrial Use 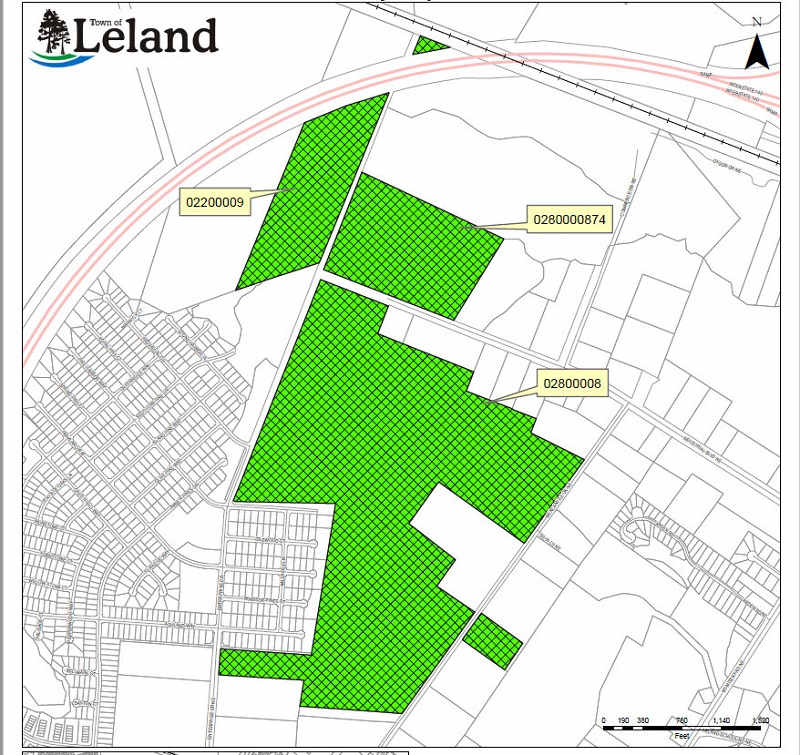 WCM Enterprises LLC, the landowner, has submitted a voluntary annexation petition for about 220 acres of industrial land, made up of three different parcels (shown above), said Gary Vidmar, the town's economic and community development director.

The first step in the annexation process was taken in May when Leland town council directed staff to review the petition and application for the annexation. Those pieces are now under review by town staff, Vidmar said.

Further details about the proposed annexation are anticipated to be released at the June 18 Leland Town Council meeting, Vidmar said. That's when staff plans to bring the proposal back to the council to review the certificate of sufficiency, which would include the staff’s review of the petition.

The certificate will then go to the planning board for review this month to make a recommendation to be presented to the town council in July, when officials could hold a public hearing and make a decision on the property, he said.

This is the first significant opportunity to get a large piece of industrial land in town limits, Vidmar said.

"Although we didn’t, up until now, necessarily have a priority on annexing land in the park, we have always made it clear that, if any landowners were to come to us with any proposed voluntary annexation, then we would consider it," he said.

The proposed annexation comes as a welcome surprise for the town, Vidmar said.

“With the town’s lack of any significant industrial land, the proposed annexation would provide us with an immediate opportunity to attract clean, high-tech manufacturing businesses that would provide high-paying jobs for residents and others in the area as well as significantly increase our tax base," Vidmar said.

In concert with the annexation is the introduction of a new zoning district the town aims to apply to the land, should it be annexed into Leland's town limits.

“The town does not currently have a zoning district that we believe is appropriate for the industrial park. And so, we are literally going to create a new zoning district and it’s going to be called the innovation zoning district, that would be recommended for the land in the park,” Vidmar said.

Planning and zoning officials are still in a drafting phase for the proposed new zoning and are working through the details as to what that zoning ordinance might look like, Vidmar said.

"[Staff] have researched and studied similar high-tech manufacturing industrial parks throughout the state and country to get the best practices,” Vidmar said. “So, ours won’t be modeled after any one particular zoning or park. But we’re using others as a guide for best practices.”

The land is vacant and much of it is currently being marketed for sale by Wilmington-based commercial real estate firm Cape Fear Commercial as part of Leland Innovation Park.

The park had been referred to in the past as Leland Industrial Park.

Leland Innovation Park Inc. was formed by Gene Merrit, who has since stepped down from the organization, several years ago as a private nonprofit group aimed at improving, marketing and promoting the park with government and economic development partners.

The annexation and new zoning are “a progression of two and a half years of conversations and the town’s participation with Leland Innovation Park Inc.,” Vidmar said.

What makes this particular type of proposed industrial zoning different is that it would not permit any heavy industrial use, Vidmar said, adding it’s focused on “clean industry."

“It will also have property-owner friendly regulations with respect to setbacks in order to allow the property owner to maximize the use of the land," he said. "So, we’re trying to provide some benefits to property owners that they currently don’t have with the county’s standards, that would attract companies.”

“The park has been pretty much idle for many years. It’s not really attracted any major companies," Vidmar said. "So, we are trying to do our part with the zoning to provide a more attractive opportunity for new development."