By Christina Haley O'Neal, posted May 28, 2020
Tweet
A new initiative through the Wilmington Chamber of Commerce is taking shape to help connect the region’s diverse Latino business community. 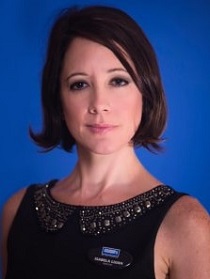 The Latin American Business Council (LABC) has been launched in partnership between the chamber and the council’s co-founders, Gustavo Rodea and Isabela Lujan (right).

“There have been ideas to do this but always from the academic field, never from the business area,” Lujan said about local efforts. “So, this is the first time a group of businesspeople is going to try to do this in the right way.”

The vision of the council is to promote accessibility for established Latin American-owned businesses in the Wilmington region through equal access to available economic and public policy opportunities that could foster, improve and boost the Latin American business population, according to the chamber.

The LABC’s first meeting was planned for early April, but with the COVID-19 pandemic affecting the ability for people to gather, the group has found other ways to reach out to the Latino business community.

The LABC has started a Facebook page and recently launched a Facebook Live video to share details about the council and distribute information to the local Latino business community.

The LABC also has been providing information to Latin American-owned businesses about the various programs, such as the SBA’s Paycheck Protection Program, to aid businesses, as well as helping firms work through the regulations regarding social distancing and doing businesses amid the COVID-19 pandemic, Rodea said.
The formation of the Latin American Business Council has been another chamber initiative in the works, building on the success of the partnership between Natalie English, president and CEO of the chamber, and local business owner Tracey Newkirk, in launching the African American Business Council two years ago.

“There was a desire to go ahead and have a soft launch of the council so that our Latin [American]-owned businesses in the community could take advantage of the resources we were offering, especially right now, and access to information,” said English.

But the initiative is not about bringing in new chamber members, she said.

"The goal is about making sure more Latin businesses have access to the resources that the chamber brings to bear," English said. "The Latin American Business Council is a vehicle to truly live into our vision to promote prosperity for our community by encouraging business growth. And that doesn’t just happen with one type of business owner.

The Latin American community, Lujan said, is very diverse, not just culturally but in the different Spanish dialects. And the diversity among Spanish-speaking populations is growing.

Nationalities represented in the community include those from Mexico, Honduras and El Salvador, who are among the largest, as well as from Brazil, Columbia, Peru, Argentina, Ecuador, Costa Rica and many others, she said.

“I think the role that the chamber and this council can have with the Latin American community can be very interesting, not only in the business point of view but culturally, the impact can be very positive,” said Lujan, who is from Venezuela. 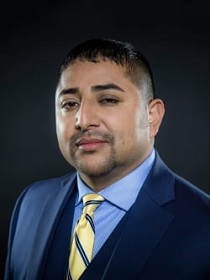 Rodea (left) said he decided to start the council because he saw the need for more Latino business leaders in the community.

“There are several different businesses in several different industries. But the problem is they are in the shadows. And I think doing this will help them be more represented in the business community itself. I believe that we are a very diverse community. And although we speak Spanish sometimes, there are barriers among us because of the cultural [differences],” he said. “So, we wanted to bring them all together as a business community and do this to create new opportunities for the future generations of entrepreneurs and professionals.”

“We want to promote integration between groups here because business owners in the Latina community are isolated – that’s the way I see the situation of the small business and big businesses here,” Lujan added.

A more formal conversation with future allies of the LABC will take place when guidelines and restrictions allow, the leaders said.

“Right now, it’s a complicated moment to start having these conversations with all the business owners. But at the same time, it’s a good moment to let them know that we are doing this,” Lujan said.

Both Lujan and Rodea hope their work with the chamber fills the need for representation in Wilmington’s business community as a whole, and aims to make more connections in the future.