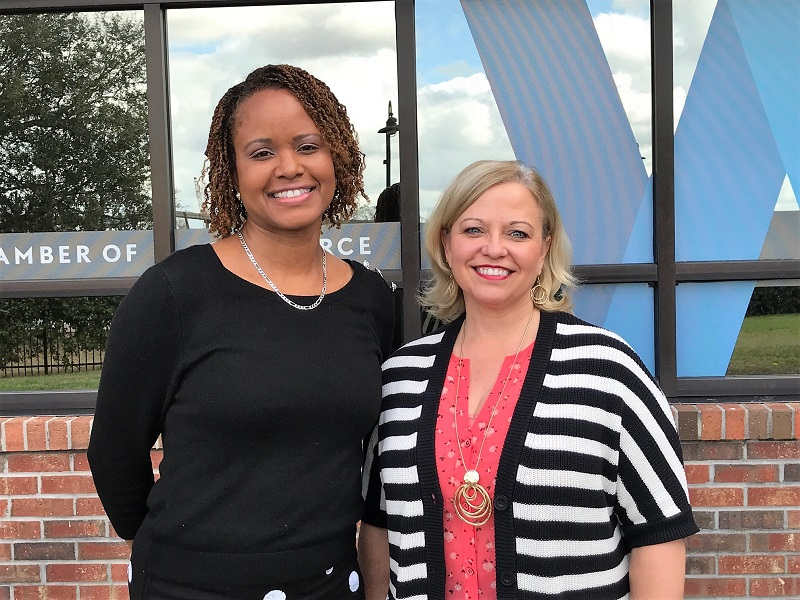 Tracey Jackson (left) and Natalie English outside the Wilmington Chamber of Commerce on Wednesday before the steering committee meeting for the forming African-American Business Council. (Photo by Christina Haley O'Neal)
More than a dozen members of the business community, along with members of New Beginning Christian Church, gathered at the Wilmington Chamber of Commerce on Wednesday to drive ideas for forming the African-American Business Council.

The purpose of the steering committee meeting was to help map out and guide some of the objectives, initiatives and mission of the council, according to Natalie English, president and CEO of the Wilmington Chamber of Commerce, which is housing the initiative.

The council will provide additional perspective and direction in carrying out the chamber’s mission and fulfilling the goals of its strategic plan unveiled in fall 2017, chamber officials said.

What sparked the initiative for the council? English said that she was surprised by the lack of diversity in some of the meetings that she was attending when she became leader of the chamber last year.

"[When] talking about how to grow the economy, when I think about that, there's a lot more than just one segment of the economy," she said.

At the chamber's women's professional development lunch event in mid-2017, "I was horrified at the end of that event to see we had six women on the panel, and they were all white. And I'm like this can't be -- not if we're going to effectively grow prosperity for the whole community," English said.

She met with Tracey Jackson, owner of u-nex-o, a local consulting firm, after the event and expressed the need to be more inclusive of local African-American businesses. Jackson jumped on board and has since been named chair of the council.

"I don't think I had an idea about how everything would play out," Jackson said. "I said yes to the opportunity and the potential that it could bring."

The group's first focus meeting for the forming council took place in January at New Beginning Christian Church, with the support of Robert Campbell,  the church's pastor who was also in attendance at Wednesday's steering committee meeting.

"Now we have the opportunity to really bring together some people who are as passionate as we are and design it. And that's what I'm really good at is help people to get from A to Z," Jackson said of the steering committee. "So that's what I'm looking forward to is being a catalyst to get it going."

When asked about some of the challenges facing African-American businesses, some are "the overall inclusion ... and feeling like we have a voice," Jackson said.

"I think this will open up a lot of doors for that," she added about the initiative. "We're not the only voice that will be in the community, but we can be a voice and especially a voice to the elements that are within the strategic plan for the chamber."

Other challenges come in the equal dispersion of the resources in the community, she said.

"If everybody is not getting their fair share of the resources, then it's not a fair game," Jackson said. "I think a whole lot of it is the broad-based ability for economic development across the board. I mean, it's not there. So all the elements up under that, kind of fall into play. And then some of it is access ... So that's one of the things is to make sure that even when there is access that, that access looks like the demographics of our community overall."

Part of the answer could lie in "connecting the dots" when it comes to joining African-American businesses with services such as the Small Business and Technology Development Center, SCORE Wilmington and University of North Carolina Wilmington's Center for Innovation and Entrepreneurship as well as other such resources. These are some of the same resources Jackson said she has used in her business, which formed in Wilmington more than a year ago.

Jackson said she would bring some of those challenges to discussions of the steering committee Wednesday. The attendees might join the council, but the official structure of the group is ongoing.The council, she said, “is still in its infant stages.”

Jackson said Keith Rhodes, local chef and owner of Catch Restaurant, will serve as co-chair of the council.

"We are actively inviting African-American businesses and business owners and leaders to become a part of the council. The steering committee is just a small group of them who will help direct where council members will spend time," English said. "So this group will sort of help define where they will spend their time and [on] what initiatives. And the initiatives will all be based on the seven critical success strategies in the chamber's strategic plan."

Jackson said she has so far received support from the business community in general about the idea for the council, "from both the black and white community ... I have been encouraged by both segments of the community."

To prompt more businessmen and women to join the council, English said the chamber is offering half off of chamber membership dues for those joining to participate in the African-American Business Council.

Another focus group meeting for the committee will be held in March. English said there is not a timeline yet on when the council will be finalized.