Getting Punchy At The Gym 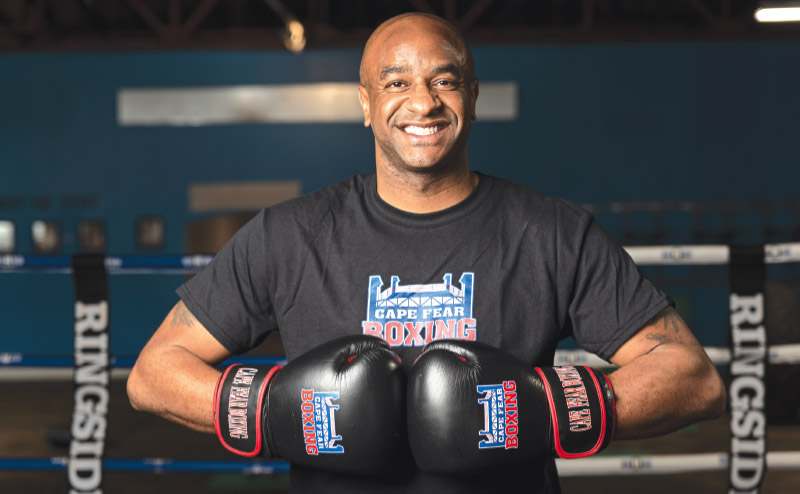 Rasheed Diaab, owner of Cape Fear Boxing at 1019 Market St. in Wilmington, said fitness boxing can give participants the benefits of boxing without getting into the ring. (Photo by Michael Cline Spencer)
If boxing isn’t delivering a knockout punch in the fitness world, it’s coming close.

A Forbes article about workout trends for this year stated that boxing has “climbed the charts in popularity,” and it’s included on a list of today’s most popular workouts.

Boxing’s metamorphosis from a sport relegated to hard-core fighters duking it out in dark, grimy gyms to one that appeals to the mainstream is due in part the influx of boutique boxing gyms that have positioned the sport as a cool way to get fit and initiated fitness boxing classes, which is boxing without sparring with a partner. Add to that the photos of high-profile models boxing to get in shape, and it has gained mass appeal.

The national trend is reflected here in Wilmington. Both Port City Boxing and Cape Fear Boxing, which now offer fitness boxing classes, have seen their membership numbers explode; and another boxing gym, Legends Boxing, opened recently. It’s a trend that’s likely to continue as Wilmington boxers share their success with friends and post photos of their progress on social media.

“Before, people weren’t exposed to how beneficial the training is,” said Rasheed Diaab, owner of Cape Fear Boxing. “People are looking for the next thing to get in shape really quickly. With fitness boxing, they can get all the benefits [of boxing] without getting into the ring.”

One of its most appealing aspects, trainers say, is that it gets results, and it gets them fast. The structured classes include everything a fitness enthusiast expects: intense cardio to melt pounds and upper- and lower-body strength training, all of which can result in a sculpted, toned body. Of course, the classes also include the boxers’ punches and footwork, through which participants also improve coordination, balance and agility.

“The calorie burn is unreal,” said Stacy Stewart, who co-owns Legends Boxing with her husband, Brian. “You build core strength and get a full-body workout.”

“You have to be mentally present,” Diaab said. “You must think quickly.”

Also, while all exercise releases stress, beating a punching bag is an effective way to vent frustration, anger or depression – and that holds true for children as well as adults, according to Diaab.

“It’s a safe outlet,” he said. “With boxing, you can release your feelings or anything you have pent up inside you in a physically active way that benefits you. This is especially helpful for kids who may not know how to express themselves or articulate their emotions.”

In addition, though fitness boxers may not have considered it a goal, they say they gain the confidence that comes from knowing that they are strong and know how to defend themselves.

“I’m toned, but I’m not a tall or muscular girl,” said Stacy Stewart, who has been taking classes for less than a year. “But you learn how to throw those punches. I could put up a good fight if I had to.”

Achieving these gains involves a lot of work (attending class four times a week is recommended) and a lot of individualized attention, a hallmark of some of the classes offered at boutique boxing gyms, trainers say. Some coaches, who often are certified fitness instructors as well as certified boxers, learn the new members’ goals, skills and fitness levels before their first class.

For example, at Cape Fear Boxing, everyone goes through an orientation where staff individualizes each person’s program, and at Port City Boxing, owner Andre Thompson often works personally with new members. Then, although everyone takes the same class, the boxers work at their own pace, and the coaches provide guidance and modify the exercises for members who need it.

“We can tailor a program to each person,” Diaab said.

Finally, though it seems unlikely in an environment of flying fists and intense physical challenge, camaraderie abounds. The tough workouts draw the boxers together. Stacy Stewart said that new members are immediately welcomed, and experienced boxers go out of their way to bring newbies into the fold, helping them with everything from wrapping their hands to correctly executing a punch.

To ensure women feel welcome, most boxing gyms offer women’s-only classes or specific times when only women train. Many classes, however, are an eclectic mix of experienced and new boxers, young and old, men and women. At Port City Boxing, 7- and 8-year-olds can be found training with the middle-aged or elderly.

“Youth and adults all train together,” Thompson said. “That allows them to learn from each other, and they get the opportunity to be around a diverse group of people, not just their peers.”

In addition to acting as each other’s cheerleaders, the boxers become accountability partners. Recently, Thompson’s female boxers asked him for an “old-time” boxer’s workout. When they learned that involved a daily 8-mile run, they set a goal to run 5 to 6 miles every day. Now other members of the gym have joined them, although they may walk or go a shorter distance.

“The women challenge each other,” Thompson said. “I don’t even have to say it anymore. They help each other out.”