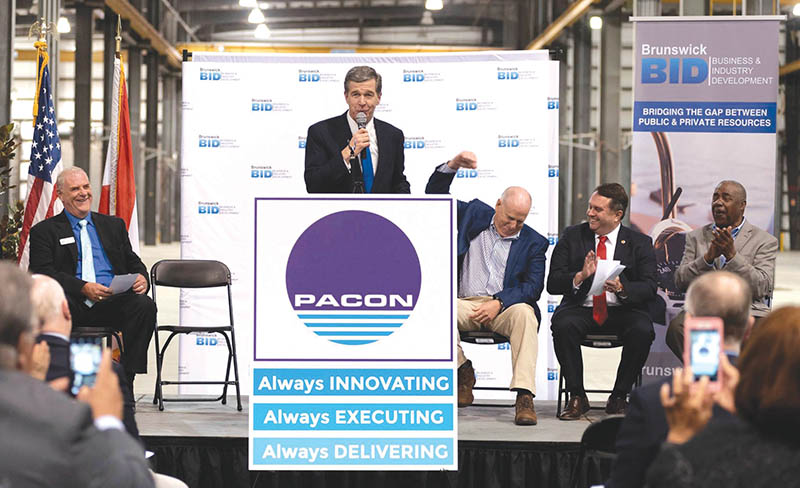 Pacon chairman Mike Shannon (third from right) gestures enthusiastically as Gov. Roy Cooper announces the manufacturer's decision to relocate to Navassa. Photo courtesy of Brunswick BID
The fact that Southeastern North Carolina has a variety of recreational offerings could have helped clinch the deal for Pacon Manufacturing in its decision to locate in Navassa.

That’s according to Bill Early, director of Brunswick Business & Industry Development (BID), who led the recruiting effort that is bringing Pacon to Brunswick County. Early said Mike Shannon, Pacon’s chairman of the board, enjoys boating, fishing and golf.

“When he relocates to the area, he will be bringing his boat,” Early said.

The wooing of Pacon, which develops and manufactures wipes, pads, towels and liquids for the consumer, industrial and medical industries, took more than a year and benefited from both patience and good timing.

North Carolina’s Southeast, the public-private partnership that promotes economic development in the region, had identified New Jersey-based Pacon as a company potentially interested in relocating. A visit to the company’s headquarters as part of an NCSE recruiting trip in the Northeast sparked some interest and spurred a visit from Pacon officials to this area.

“They really liked the greater Wilmington area,” Early said. “The key was finding a building suitable for their needs. This is a prime example of the value of having buildings available [for companies wishing to relocate or expand].”

As Pacon shopped for a location, local officials showed them sites that could be developed for the manufacturing company. All would have required construction of buildings, according to Early.

“The [property] had been off the market by the owner for some time, and they decided to put it back on the market last July,” Early said. “Pacon was looking at the building by August.”

After Pacon agreed that the U.S. Marine site could fit its needs, negotiations on what was then code named “Project Pavement” moved forward. Economic development officials initially expected a public announcement in February, but the company felt it needed more time to do a thorough assessment of the costs and benefits of relocating to Navassa.

“Pacon needed to be comfortable with the cost of doing business here, in terms of taxes and fees that could be assessed, and the labor supply,” Early said. “They had to make sure it could be profitable.”

Eventually, Pacon’s leadership decided that moving to Brunswick County, which has the 11th-lowest property taxes of all North Carolina counties, was an attractive option.

On April 5, Gov. Roy Cooper announced Pacon’s plans to relocate to Navassa, make a $37.6 million investment and ultimately create 299 jobs. The project received a $300,000 One North Carolina Grant, which is performance-based, to support its investment in the region.

“When Pacon has filled 25% of their job creation commitment, they will get 25% of the money, and so forth in increments,” Early said.

On April 19, the state’s Rural Infrastructure Authority announced its approval of a $700,000 Building Reuse Grant to help with the cost of renovation of the former U.S. Marine Building facility.

Renovation expenses are estimated at about $2 million, according to Early.

Pacon and Brunswick officials anticipate that the New Jersey company could close on the site sometime in May, Early said.