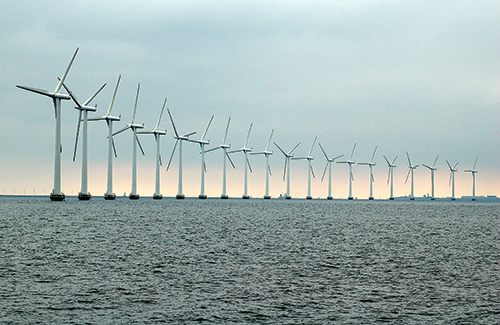 In a move designed to hammer out a “single common approach” to issues involved in the development of offshore wind power, a federal agency has folded decision-making related to wind-farm leases south of Wilmington into South Carolina’s leasing process.

The decision by the U.S. Bureau of Ocean Energy Management (BOEM), shared with North Carolina officials in April and South Carolina officials during a May 17 webinar, will allow the agency to make decisions “in a regional manner” concerning North Carolina’s Wilmington West and Wilmington East WEAs (wind-energy areas) as well as the Palmetto State’s Grand Strand area, said Casey Reeves, a BOEM official who will lead both the South Carolina Task Force and newly created Joint Task Force discussions.

Plans for the development of commercial wind farms in waters off the Outer Banks will continue on a separate track, federal officials said.

“It’s the first time that we’ve seen them bring two states together under the stakeholder process,” observed Liz Burdick, executive director of the Business Network for Offshore Wind, a coalition of supply-chain stakeholders. “They’re trying to quicken the process.”

To date, BOEM has awarded 11 commercial wind leases in Virginia, Maryland, New Jersey, Rhode Island and Massachusetts. No leases have yet been awarded in the Carolinas.

BOEM’s new two-state task force faces three thorny issues: how far from shore wind turbines should be placed, how to lessen “wind wake” from one wind farm that reduces energy output in another and how activities can avoid damage to whale calving grounds – a concern that caught some stakeholders by surprise.

In January, the National Oceanic and Atmospheric Administration (NOAA) expanded the critical habitat for the North Atlantic right whale to include all of Wilmington West, a small portion of Wilmington East and zones along the South Carolina coast down to Florida.

Protecting calving areas is “essential to the conservation of the species,” Barb Zoodsma, NOAA’s Southeast U.S. right whale recovery program coordinator, told webinar participants. “The features have to be available” as whales move from the Carolinas to Florida and back, she told the group, citing water temperature, water depth and sea surface.

“This will no doubt be the first question from the developers who initially indicated interest and would think about moving forward with the lease process,” said Katharine Kollins, president of the Raleigh-based Southeastern Wind Coalition.

While New Jersey-based Fishermen’s Energy has expressed some interest in erecting wind farms off the Carolinas, the company will now have to look at the “practical impact” of the new right-whale policy, said Paul Gallagher Sr., the firm’s chief operating officer.

“All of a sudden you’re running into two hours of overtime” during construction if calving grounds and migration patterns conflict with vessel speed, he said. “That’s an impact that we’re evaluating.”

Other stakeholders see the new rule as being helpful to a different concern: maintaining pristine views of the ocean that keep tourists returning to the Tar Heel State.

Peter Larkin, a town council member in Sunset Beach who attended the task force webinar, is adamant about keeping wind turbines at least 24 nautical miles from shore. He suggests the new NOAA policy could help maintain the picture-perfect horizons that residents and tourists are accustomed to.

“In that the environmental impact study regarding the North Atlantic right whale critical habitat calving area might have a significant influence on the final determined wind turbine locations, we are hopeful that the present layout will be significantly modified,” Larkin said via email.

It remains unclear whether the “single common approach” being pursued by BOEM will lead to a uniform standard governing how far turbines are placed from shore.

While Sunset Beach, Bald Head Island and Ocean Isle Beach prefer a distance of 24 nautical miles or greater, governmental and business interests just over the border seem pleased with a standard of only 8-10 nautical miles.

Grassroots support for offshore wind farming remains “very positive,” and civic and business leaders in his area continue to speak highly of renewable energy, said North Myrtle Beach Chamber of Commerce president and CEO Marc Jordan. The view from his city’s shoreline to a wind farm would be indirect, he said.

Asked whether BOEM would seek to develop a uniform shore-to-farm standard that applies to both states, Reeves would only say that the combined task force “will allow us to make informed decisions on wind energy development offshore North Carolina and South Carolina in a regional manner.”

Once developers hear more about sight lines and specific locations of whale preserves, they will need to analyze the costs associated with having a competing wind farm nearby.

Because upwind turbines impact natural wind flow, downwind turbines can experience diminished energy production, which in turn can impact on-shore use, a developer’s revenues and even a company’s decision on whether to proceed with a project.

With the Grand Strand zone contiguous to Wilmington West and Wilmington East just 13 nautical miles away, BOEM is combining the leasing process to craft a common approach that addresses wake effect.

“Combining the Wilmington West WEA with the Grand Strand Call Area and leasing them together would allow for a developer to site their project in a way to maximize the wind resource,” BOEM’s Reeves explained.

“If you have site control … there’s a value in that,” said Fishermen’s Gallagher.

Reeves points to a variety of methods that can be used to mitigate wind wake: increased spacing between turbines, siting turbines in non-linear fashion and creating miles of turbine-free space between contiguous farms – increasing the odds of commercial success.

Participants in the recent webinar were told that BOEM is conducting a final review of developers’ financial, technical and legal qualifications, after which the task force will receive the agency’s findings. After that, the lease application process begins. An auction will be held if more than one company desires a particular location.

“I really think it takes five years, award of a lease to construction of a wind farm,” Gallagher said, meaning it’s unlikely that the first turbine south of Wilmington will appear before 2022.