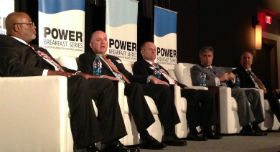 “I will say one of the negatives with developing along U.S. 421 in New Hanover County at the moment is the special use permit,” said John Nelms, economic development manager for Duke Energy. “Many of your major industrial projects right now are run from site consultants…they are not in the business of keeping sites in the mix if there are issues.”

Nelms’ comments on the county’s SUP ordinance came in response to questions from moderator and Business Journal publisher Rob Kaiser about U.S. 421, a focus area identified by county and city officials in a joint meeting last year as a priority in terms of infrastructure improvements to attract industry.

“The way it is written today, it is very broad and it is very difficult for a company to look at that ordinance and know that they will meet the standards of it,” Nelms said of the SUP.

In response to Nelms’ assertion, Barfield talked about the current SUP ordinance’s beginnings. In 2010, New Hanover County was the only county in the state that exceeded new environmental health standards set by the U.S. Environmental Protection Agency on sulfur dioxide emissions, which led to the county commissioners’ approval in 2011 of an SUP ordinance that replaced a policy dating to 1969. Exceeding EPA standards in that way could have led to problems recruiting industry and potentially affect the county’s bond rating, according to previous GWBJ articles.

On Thursday, Barfield said he does not favor taking the Board of Commissioners “out of the loop” by changing the current SUP ordinance in a way that would give a panel, such as the Planning Board, which is subject to political appointments oversight on special use issues in industrial zones and cutting elected officials out completely.

“The businesses that want to come here, they’re going to come…They’ve got to be willing to protect our environment as well as be good stewards of our community,” Barfield said.

Nelms said the SUP cut New Hanover out of the running for Brooklyn, New York-based Acme Smoked Fish Co., which officially announced the opening of its facility Thursday in Pender Commerce Park on U.S. 421 at the Pender-New Hanover county line.

“There was a site just across the county line that would have been considered, and it was not because of the special use permit,” said Nelms, whose team, along with other local economic development leaders, helped bring North Carolina to the attention of Acme when the company’s consultants were looking for a new facility’s location.

On the topic of revisions to the SUP ordinance, Barfield said later Thursday, "We’re more than likely going to revisit that conversation, but there’s nothing planned right now."

And although Under the Dome and Bolden are still filming in Wilmington currently, “we just don’t have the ability to recruit additional projects right now until we can get some more funding in this grant program,” Griffin said.

The good news, he said, is that leaders are optimistic about the chances of lawmakers increasing the grant funding when the current grant program expires at the end of June. Griffin said $65 million is needed to maintain the level of filming that Wilmington previously had.

“Anything less and you’re acknowledging that you want to reduce the industry,” while anything greater than $65 million would allow the industry to grow, he said.

Griffin said he heard more good news at a trade show in Los Angeles last week. “They have not given up on us,” he said of the film and TV industry professionals he spoke with there. “It has to work financially for them to be here, but this is a community they enjoy, this is a community they like doing business in” because the Wilmington area contains the infrastructure and crew members they need, Griffin said.

Addressing a question about a potential focus on luring TV productions to the area, Griffin said, "Television is certainly the biggest bang for your buck," citing shows in the past that contributed to the local economy for several years, including One Tree Hill.

"These is a rabid fan base of people out there who follow these shows and come to town just to see the sites where these shows were filmed," Griffin said.

Saffo said Thursday, “I applaud the county taking the lead in the evaluation of economic development. I think we need to do that about every five years."

The mayor was referring to the Garner report, an economic analysis the county paid for, from which city and county leaders have been working to choose recommended goals and get the ball rolling toward accomplishing them.

He said while extending infrastructure on U.S. 421 is important, another Garner-identified goal he’s more interested in is a sustainable source of funding for economic development efforts.

“When a big company comes to this community, the chances are pretty good that they’re going to ask us for something. We’ve got to make sure we have some money there to recruit big companies that are creating a lot of jobs,” Saffo said.

A quarter-cent or half-cent sales tax increase could ensure that tourists who flock to the area contribute to economic development efforts, he said. “We’ve got to find a way to be able to generate revenue because I believe we’ve got to take control of our own destiny and not continuously look to Raleigh…” Saffo said.

While downtown Wilmington is one of the biggest commerce centers in the region, with nearly 900 businesses, 11,000 employees and a tax base of $600 million, smaller businesses and retail stores that open there make an important contribution, Wolverton said.

As the panel talk wound down Thursday morning, officials said members of the business community can boost economic development efforts by contacting legislators to share their support or suggestions. They can also communicate their needs to local elected officials when it comes to ordinances or policies, Saffo said, using the example of the craft beer industry boom in Wilmington.

In summary, he said, “Without business, without jobs, we can’t pay our bills, we can’t fix roads, we can’t fund our police departments or fire departments, so you’re a very important aspect of this community."