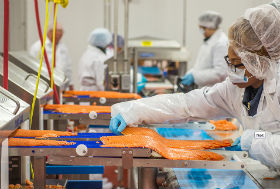 While the facility began operating a few weeks ago, the company made its official announcement about the opening Thursday, said Gabriel Viteri, Acme’s vice president of strategy and business development. Viteri also said Thursday that the Pender plant currently employs more than 50 workers, but that number will increase as the firm ramps up production.

In 2013 when announcing that ACME was coming to Pender County, officials said the company planned to invest between $25 million and $30 million in the local facility and hire 120 employees.

“Strategically located to complement Acme’s existing locations in Brooklyn and Pompano Beach, Florida, the facility will serve as a platform for Acme to accommodate future growth and sales opportunities in the smoked seafood category, both domestically and internationally, while still remaining connected to its Brooklyn roots,” Thursday's release said.

Acme traces its roots to 1906, according to the announcement, and is family owned and operated. The company manufactures Acme, Blue Hill Bay, Ruby Bay and Great American smoked and cured seafood.

Adam Caslow, managing partner of Acme, said in the release, “As the latest advancement in our plan for sustained, long-term growth, this expansion gives us an opportunity to offer a wide variety of high quality smoked seafood products to customers around the world. We're thrilled to utilize the skills and traditions honed in Brooklyn – the epicenter of smoked fish – and expand upon them to develop the world's most advanced cold-smoked fish facility.”

Acme posted a gallery of photos of the Pender facility on its website Thursday.

The firm is also expanding outside the United States by adding a facility in Chile, which will give Acme’s U.S. fish smoking operations the advantage of being in complete control of its raw material, the news release said.

"Extensive research has proven that raw material plays a monumental role in the assurance of quality and safe smoked salmon which is why we added the Chile facility," Viteri said in the release. "This advantage, in addition to our food safety standards and particular emphasis on being Listeria-free, will help us maintain our reputation as industry leaders in the smoked seafood category in the U.S., and position us as industry leaders in the category worldwide."