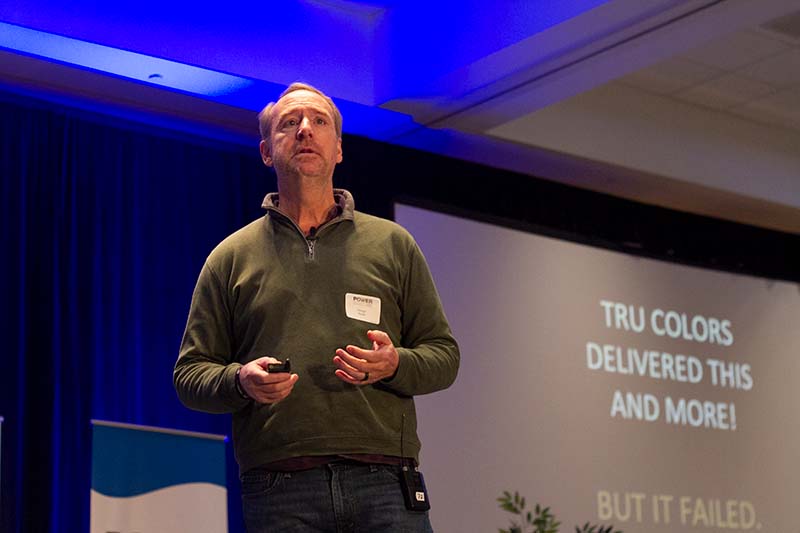 Representing a variety of business and nonprofit interests, speakers offered updates and reflections on their unique projects to a sold-out crowd.

Rhonda Bellamy, CEO of The Arts Council of Wilmington/NHC, gave an overview of the Wilmington Rail Trail, an initiative that proposes to revitalize an unused rail yard that spans six blocks of downtown Wilmington.

The half-mile corridor was last used for rail in the 1960s, Bellamy said. “Sixty years this land has remained barren,” she said.

Project planners envision infusing the space with public art and making it walkable and accessible. The goals of the project include connecting Wilmington’s Northside residents with the central downtown area, creating a unique space, fostering arts-driven economic development, honoring the site's history and of course, getting it funded.

A master plan has identified constraints and opportunities the project presents. The second and third phases of the project explore the potential for rail to return to the corridor.

Work to improve the area will cost an estimated total of $5.4 million, Bellamy said. Within roughly a year, she said she expects the ongoing engineering and design phase to wrap up.

With a focus on data analysis and affordable housing, Cape Fear Collective launched in 2019. In its first few years, the group has built up its portfolio of homes, targeting affordable housing. With $17 million spent so far, the portfolio has grown to about 100 single-family homes.

Investors, which include lending institutions such as Live Oak Bank, First Citizens Bank and more, receive modest returns for their impact investments through the venture. “The return is below market rate but the social return is exponential,” Dennison said.

More than one-third of households in New Hanover County are cost-burdened, she said. Home prices in the Southeastern, North Carolina region have jumped at a rate of 22% – faster than the rest of the state.

Firefighters, nursing assistants, preschool teachers and other professionals can't afford housing in the area and remain “virtually locked out of the market,” she said.

"Homeownership is becoming increasingly unattainable for most people in our region," she said. "Eliminating first-time homebuyers does more than drive housing inequity – which it certainly does. It suffocates wealth creation."

Since acquiring the homes, Dennison said the group has spent its energy on getting them into a habitable state after years of neglect by prior landlords. The eventual goal is to provide renters a path to homeownership and to improve the area’s housing stock, she said.

In October, GE Hitachi unveiled plans to hire nearly 500 employees to meet the demand for two initiatives. Through a joint venture called Natrium, with Bill Gates-funded TerraPower, the firms are designing a sodium-cooled advanced nuclear reactor. Fuel for this facility will be produced at a new facility at the GE Hitachi Castle Hayne campus.

Another aspect of GE Hitachi's latest expansion entails the planned deployment of its BWRX-300, a small modular reactor that is based on previous boiling water designs. Because the new design is based on legacy technology, it will reach the market faster, Ford said, and should cost about one-fourth the amount the build, compared to older models. Each will cost roughly $2 billion to build, he said.

Several utilities and governments have signed agreements with the intent to build the BWRX-300 reactors, he shared. This month, Ontario Power Generation broke ground on its first, and plans to build four in all. “We’re going to build a slew of these things,” he said.

Watch Ford’s full presentation. For more on GE Hitachi’s plans, check out the latest issue of WilmingtonBiz Magazine, which will be released online Friday.

The audience also got to hear from entrepreneur George Taylor, who suddenly announced the closure of his brewery venture, TRU Colors, this fall. A central tenet of TRU Colors was to address social exclusion and inequity through increased professional and economic resources. The brewery hired rival gang members to push its anti-violence mission and began selling its signature ale, TRU Light, last year. Its Wilmington taproom, situated in a renovated building on Greenfield Street, opened in June.

“It was working,” Taylor told the audience.

So what went wrong? Taylor first cited the pandemic, a deadly shooting that took place in his son’s home and Hurricane Ida, which damaged a brewery in New Orleans the brand was using to produce TRU Light.

The brewery kept missing its goals to get its beer into stores, Taylor explained, blaming equipment delays caused by the pandemic, contractors backing out because of news coverage of the shooting, and Ida.

During the attempts to get the beer to the market, between March and November 2021, “we burned about $2.9 million” in unplanned spending, Taylor said.

He said by January, the business was in a difficult spot financially. The team had put together a backup plan to increase volume, he said, and cited an opportunity to purchase Modern Times, a financially distressed California-based brewery that was auctioned this summer.

At the time, Taylor’s son, Kurt Taylor, told the Greater Wilmington Business Journal the attempted acquisition had no association with TRU Colors.

Later in the year, Taylor said his Hail Mary plan to get commitments from investors fell through when he disclosed a high-profile media article was getting ready to be published.

“We ran out of money and we ran out of runway and I couldn’t get the support to do anything about it,” he said.

Finally, on the heels of Friday’s announcement of the New Hanover Community Endowment’s inaugural funding round, outgoing chair and co-chair Spence Broadhurst and Hannah Dawson-Gage shared reflections on the process.

Both said the first grant cycle, which dispersed a combined $9 million to more than 100 recipients, was approached broadly. The endowment’s emphasis during this first trial run was on filling essential needs, Gage explained.

Board members individually and privately analyzed nearly 300 grant proposals that sought $30 million combined before coming together to share opinions. “I would say it was an overwhelming process,” she said. In the future, Gage said she imagines board members will be less involved in the application approval process. “It was an educational process for us and we narrowed it down.”

Though the board has the ability to disperse up to 4% of its market value annually, Gage said the community’s nonprofit community isn’t yet ready for that level of capital.

“If we were to roll out $40 million right now, we don't have the capacity,” she said.

Broadhurst said the board anticipates approving its strategic plan this week and setting its priorities in the first quarter of 2023. These refinements will set the tone for how the endowment will conduct future grant cycles as it narrows its strategy.

“This created an exercise for the entire nonprofit community,” he said.

Watch the full discussion with Broadhurst and Gage.