Experts Share Insights On Economy, Region at Conference And Expo 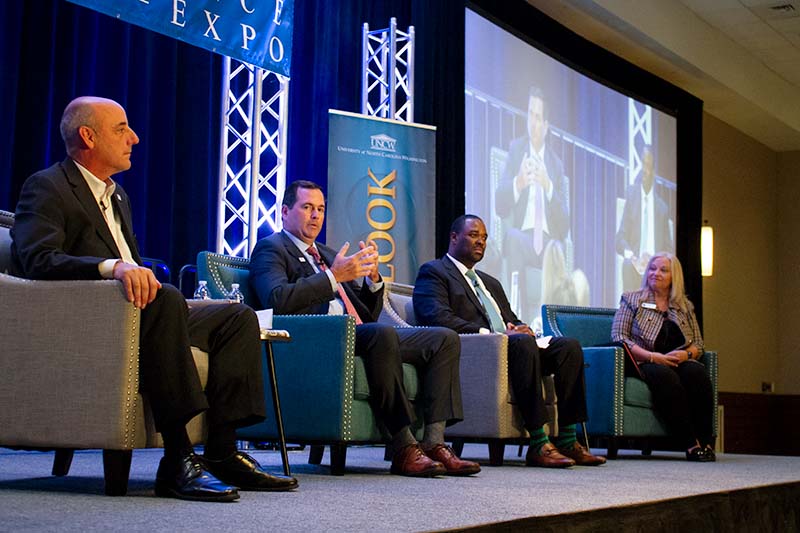 Panelists address the audience at the WilmingtonBiz Conference & Expo Keynote Lunch. (Photo by Johanna F. Still)
A recession is inevitable, economic experts told a group of business and community leaders in Wilmington on Thursday. Its gravity and duration, however, remain unknown.

At the WilmingtonBiz Conference & Expo Keynote Lunch, “Economic Outlook: Going Places,” experts shared a negative but not quite grim perspective on the months ahead.

“We're really at a whole regime change point in the economy,” Daley said at the luncheon, which was hosted by the Greater Wilmington Business Journal and UNCW's Swain Center.

Record stimulus via simultaneous fiscal and monetary policy sparked a “turbo boost” to the economy, Daley said. The heightened interest rates are causing the equity and bond markets to suffer, according to Daley.

Daley said he’s hoping the Federal Reserve takes a step back from its recent path of amping up rates. “How long does this reset period last? Well, the answer is, the bottom line answer is, how far does the Fed take this tightening?” he said.

Daley said his firm anticipates stocks, currently trading at about 16 to 17 times earnings, could go as low as 14 times earnings. He reminded the audience that bear markets tend to last much shorter than bull markets. “Don’t panic,” he said. “Ride it through.”

University of North Carolina Wilmington regional economist Mouhcine Guettabi shared a similar outlook on the anticipated contraction ahead. “A slowdown is inevitable at this stage. The question, is [the Fed] going to engineer what they refer to as a soft landing?” he said.

Guettabi highlighted two contradictory factors: peaking consumer spending matched with plummeting consumer confidence. “People are continuing to spend a lot of money and nobody's acting their wage,” he said. “We think things are bad, but we are making that reservation at that very nice restaurant.”

He called this impact a “wildcard” for the regional economy. The impact of inflation varies drastically depending on the sector individuals are employed in and where they live. While, for example, wages in the Wilmington area for construction workers rose higher than the rate of inflation as of this summer, education and health care earnings jumped just 2.3%. Overall, wages in Wilmington outpaced inflation, but this was driven by sectors that have struggled to hire, according to Guettabi.

The Wilmington area is up about 6,000 jobs post-pandemic, he said, and has recovered from COVID’s scars.

Despite the gains, he said uncertainties surrounding the housing market and consumer spending will linger. “It would be naive to think that we're going to continue just plugging along and growing at the same rate that we've grown up over the last couple of years,” he said.


Also at the luncheon, a panel of leaders from various industries shared their respective outlooks.

Also, the university plans to raze Galloway Hall in favor of either a new residence hall or student success center, he announced. “I like to think of UNCW as a small town,” he said.

Most students are seeking remote options for their careers, Davis said. He spoke about the importance of preparing students for the realities of joining the workforce, including adjusting salary expectations. “We have to help our students realize that sometimes they may not always have the bargaining chips,” he said.

About 100 acres of new ground leases will add roughly $2 million to ILM’s revenues. “We can apply that revenue toward our aeronautical rate base… making the airlines more successful,” he said. “We can lower the rates and charges to the airlines, making it more attractive for them to come to this community versus some other community and use that to grow air service for all of you.”

N.C. State Ports Authority director Brian Clark highlighted his group’s strategic growth initiatives, including a new container gate and terminal operating system that has enhanced efficiency. This week, the port broke ground on phase two of its refrigerated container yard, Clark shared. The $22.6-million project will add another 704 plugs – electric connection points for refrigerated containers – to the port, bringing its total to nearly 1,500.

Given the ports’ physical workforce needs, Clark said recruitment and retainment was one of its biggest challenges. An inability to offer remote work is a disadvantage for the organization, he said.

Wilmington Chamber of Commerce president and CEO Natalie English touted – unsurprisingly – the need for infrastructure investments, especially in a replacement for the Cape Fear Memorial Bridge. English has spent more than a year advocating for a plan for the bridge’s replacement.

She also addressed the need to transform Highway 74 into an interstate to remove traffic stops and other deterrents to seamless traffic flow. “74 needs to be interstate so that we can get the core traffic that is currently going to Charleston,” she said. “I want it all.”

Asked by an audience member whether a sentiment among companies that employees should get paid less because they get to live by the beach, English said it’s no longer the case. “Those days are over because the talent war is real,” she said.