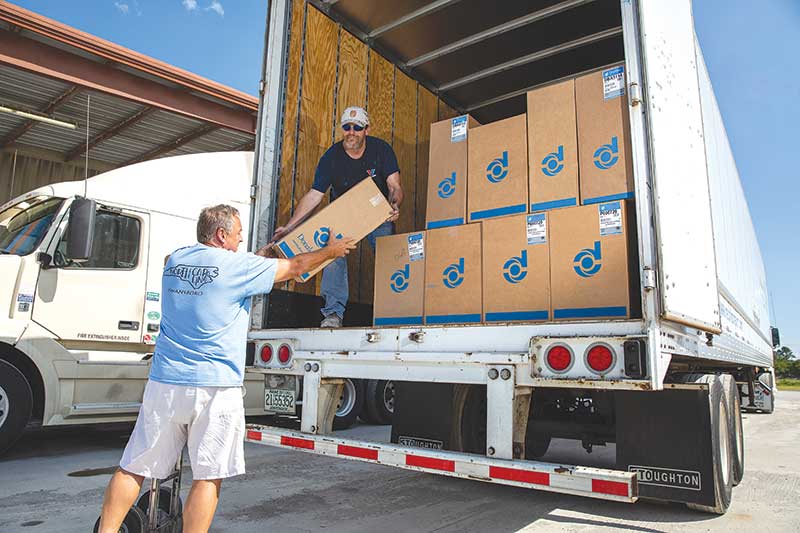 Bobby Askew (left) and Mark Thorndike load a truck at MCO Transport, one of several transportation companies in the area noticing an increase in business because of port activity and industry changes. (Photo by Chris Brehmer)

Logistics and trucking companies in the area are seeing more mileage

During the same time period the Port of Wilmington has seen significant growth, local trucking companies also are reporting an uptick in their business.

Some, such as MCO Transport, are seeing the increase because of the port; others cite different reasons. They all agree business is doing well.

Container traffic at the port was reported recently as being up 38 percent over the previous year while general cargo was up 18 percent.

MCO vice president Laurie King said because MCO’s business is 85 percent port related, the firm has definitely shared in the increased activity. In addition to Wilmington, MCO services the ports in Norfolk, Charleston and Savannah.

The company runs 150 trucks hauling everything from agricultural chemicals to paper and food.

“You name it, we’ve probably hauled it,” she said.

The trucking industry in general is seeing a lot of change, some of which accounts for the increased business, she said. While MCO was the first company in the state to install electronic logging devices on all its trucks, a decade ago, the industrywide requirement became effective in December.

Because of the expense, many companies, especially small ones, waited until the requirement went into effect to make the changeover, she said.

With drivers being restricted to the number of hours they can drive at a stretch, the electronic logging has resulted in the need for more trucks and drivers to keep up with the demand at the port, King said. “We’re picking up more of that work. There’s more business, and because of the restrictions, compounded with the fact that there’s also a major shortage of drivers nationwide, I’d say many carriers are at capacity,” King said.

Wilmington-based MegaCorp Logistics does no business directly with the port, but owner Ryan Legg said that any upswing in the port’s activities would indirectly increase his business.

Overall, MegaCorp has seen such an upswing in business that officials are looking forward to moving from their 20,000-square-foot building into 46,000 square feet within a few months, Legg said.

Recently named one of the Top 40 Freight Brokerage Firms in the US by Transport Topics, the third-party logistics company manages freight for chain stores including Walmart, Kroger and others, as well as working directly with manufacturers. For the big-box stores, for example, they might pick up from the manufacturer and deliver to a distribution center where the company’s own trucks pick it up for delivery to individual stores.

MegaCorp operates in all 48 states, Mexico and Canada.

“The commodities we haul are a little of everything: fresh produce out of California and Florida. Poultry like House of Raeford in Rose Hill,” Legg said.

MegaCorp operates five of its own trucks, but those it brokers are unlimited. They also help companies to find freight.

“We match up trucking companies with shippers and people who have the freight,” Legg said.

To guarantee delivery of the product on time, Legg sometimes gets involved in making truck repairs or other issues encountered by the brokered carriers.

That includes a lot of owner-operators who run just for MegaCorp, he said.

Legg agrees with King about the effect of the electronic logging requirement.

“That created a 10 percent shortage of drivers in the market because they didn’t want to go to the new device. A lot of them retired. Small companies didn’t want to spend what it cost,” he said. The driver shortage that had always been bad got much worse, according to Legg.

“Another factor is that the economy is so good. It’s almost a perfect storm. American manufacturers are booming so there’s more freight. Freight rates have gone up in part due to rising salaries for truck drivers,” Legg said.

Companies are offering signing bonuses and other enticements to get drivers, he said.

“I read last month that there were 52,000 orders for new Class A tractor/ trucks, which is the highest since 2006. Companies are making more money and buying trucks. Customers would call this time last year and ask for five trucks a week; now it’s 15 a week,” he said.

For Legg’s company, the result has been an almost doubling in the number of employees.

For the smaller owner-operators who weathered the logging requirement, business is also good. Tom Walsak, COO of TALL Trucking Inc., said his firm’s business is growing as well.

The Wilmington-based company founded in 2015 delivers refrigerated and dry goods in the southeast and Midwest.

“Our business is growing steadily, which is uncommon for an owner- operator. This is a tough industry, particularly for smaller companies, but there is opportunity for people who want to learn it and work hard,” he said in an email.

Walsak has served on the advisory board for Cape Fear Community College’s truck driver program.

“There is certainly a driver shortage across the industry. It’s a great time for younger people to pursue trucking as a profession. Cape Fear has a great program. That’s where I started. It’s less expensive but higher quality than many of the two-week private courses advertised to get a CDL (commercial driver’s license),” he said.

He also stressed that building a strong business requires understanding all aspects from the back office to the truck.

Embracing technology is a necessary part of the business, Legg said. Smartphones in particular have been a boon, allowing the company to see where their loads are at any time.

King, Legg and Walsak all expect the growth, and the challenges, to continue.

“We could easily hire 20 more drivers in Wilmington and still have enough business to accommodate that,” King said.

Legg expects to hire more people as soon as MegaCorp moves into its new facility off Sir Tyler Drive.

“We’re bursting at the seams and need more space to hire more personnel to keep up with the increase in business,” he said. “Once we move, we will be able to hire more, which will increase the volume of our business.”

The version updates an employee number at MegaCorp.