She knew she wanted to work for herself - or at least a small company - and build products, rather than maintain them. Ritter, currently a graduate student in computer science, moved to Wilmington to learn about mobile apps and entrepreneurship.

She started out at CIE as an intern for a startup that is no longer in existence, but she believes that "success or failure, it’s still a great experience working for a startup."

Last year, Ritter began a directed independent study with Dr. Ron Vetter, UNCW Graduate School Director and an overseer of the CIE, who mentored her while she developed the UNCW mobile app that was released last year.

At Vetter's suggestion, Ritter stayed on with the CIE and continued using its resources to help other people develop apps. She leveraged her graduate assistantship as an advisory role to local companies and CIE tenants beginning last July. 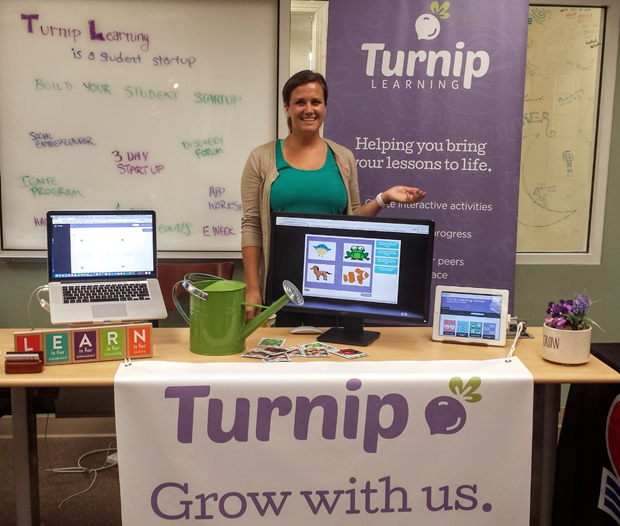 The idea for Turnip Learning, the startup that Ritter founded, came in October of last year, after Ritter began noticing that professors were reading slides instead of engaging students with hands-on activites.

"We’re sitting in a server room; we’re supposed to be learning about networks. We should be touching the computers and building networks and instead we’re reading from PowerPoint slides," she said.

Ritter recalled how one computer-based training game that involving sinking ships for wrong answers had engaged her much more than PowerPoint slides, and the idea for Turnip Learning was born. With a focus on
project-based, applied-learning classrooms, Ritter wanted to create software platform for teachers to make and share entertaining content.

Loosely based on other products, such as Teachers Pay Teachers - website where teachers can buy and sell paper content from one another - Turnip Learning will allow teachers to create mobile-friendly digital content that can be bought and sold on Turnip’s online marketplace.

Turnip Learning didn’t fully launch until this spring and already, the product is in alpha testing stages. In the meantime, Turnip has become an active and valuable tenant of the CIE, coming together with all other employees this summer to run a workshop series called Website Basics for Business Owners.

But for Ritter, talking to teachers is most important.

She frequently interacts with the Watson College of Education at UNCW, getting feedback and new ideas for Turnip Learning. Some industries don't always want to adapt to changing technology, she said, but teachers seem eager to embrace it.

"[And] when you step into Watson… you feel like everyone is going to give you a hug," Ritter said.

Turnip hopes to get its product in the hands of 10,000 teachers by spring 2017 - an ambitious goal. As for the entrepreneur community in Wilmington, Ritter hopes to see more students developing apps and becoming entrepreneurs.

If you’re really stressed out, you can just spend a Saturday morning at the beach. That’s my recovery—it’s important to recharge and get some perspective.”

More information on Turnip Learning is available at http://turniplearning.com. You can also follow Sarah on Twitter at @sarahlovestech.

Other Posts from Diane Durance