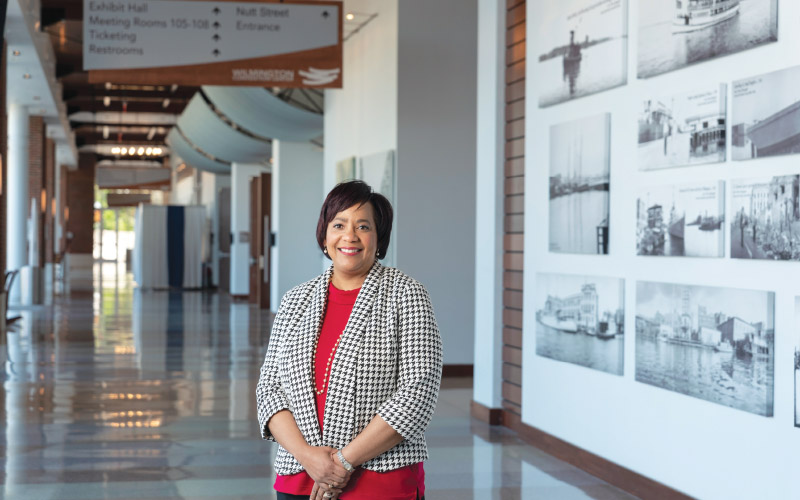 Fredia Brady, general manager of the Wilmington Convention Center, said the center is getting updates and major structural repairs. (Photo by MIchael Cline Spencer)
Keeping up a house takes work. Keeping up a riverfront structure that houses ballrooms, exhibit halls and meeting rooms for hundreds of events and thousands of visitors takes even more work.

Add hurricane-related damage to that, and the workload increases exponentially. That is the reason the Wilmington City Council unanimously approved $1.9 million for repairs to the Wilmington Convention Center.

Hurricane Florence inundated the area with record-setting rainfall in 2018, and it caused extensive damage to homes and other structures, including the convention center.

The total convention center project, according to city staff, will cost $2.7 million. The city received $763,610 from FEMA funding, and insurance provided $25,463. The remaining funds will come from the Convention Center Fund.

“The $1.9 million includes roof repair, siding and major structural repairs that have to be done,” Convention Center General Manager Fredia Brady said. “Some of it has to do with general upkeep of the building, also.”

The Wilmington Convention Center first opened its doors in November 2010, so it was anticipated that maintenance would be needed to account for “wear and tear of the facility,” according to Mayor Bill Saffo.

“The fund created took into account that we would have to do general updating every 10 years or so, and we are getting more conventions, more conferences, more people coming,” Saffo said.

The project has been divided into two phases. The first phase is an architectural assessment, which has already been completed, and the second phase is the repairs, which are now in progress.

One of the major repairs needed to the building includes the outside siding where water leaked behind and seeped inside damaging walls, floors and ceilings.

The interior work is in progress and is set to be completed by the end of February.

“Refurbishing and redoing what needs to be done is expected on a 10- year basis. Repainting and installing new carpets is important for general upkeep of a facility that receives as much traffic as the convention center does,” Saffo said.

With about 75,000 attendees each year, the 10-year-old building has seen its share of wear and tear over the course of the past decade. Given that the event space is solidly booked most months, it can be difficult for construction crews to get in to make repairs.

A reprieve in January allowed an opportunity to take care of some of the much-needed work. 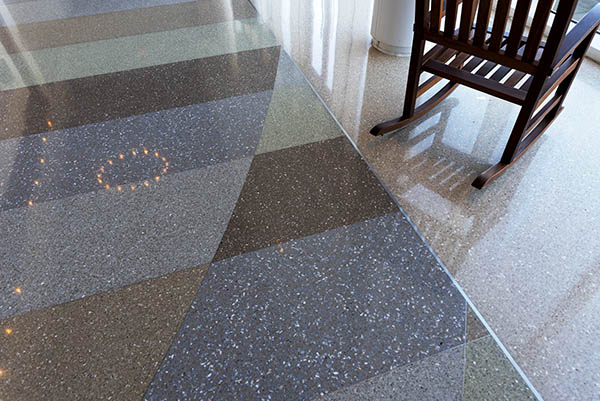 Water damaged its terrazzo floors, so convention center officials took advantage of the downtime and blocked out two weeks to get those resurfaced and sealed with a protective coating. Having to work around a busy event schedule, other repairs required careful planning and coordination in order to complete.

“In November and December, we didn’t have any non-event days,” Brady said. “January was light, but now it’s February, and we’ve hit the ground running.”

Carpets and fabric paneling were replaced in three meeting rooms, all of which had seen hurricane water damage. New carpets were also installed in the ticket office and other administrative offices, and drywall and baseboards have been replaced and painting was completed throughout the space.

Both the main ballroom and junior ballroom are set to have carpets replaced and ceiling damage repaired.

Exterior work has begun and a November completion is planned.

“The city has done a really good job studying and looking into how water was getting in and making sure it was fixed and preventing future damage,” Brady said.

The majority of the recent issues occurred on the north side of the building, which was exposed to extensive water damage during Hurricane Florence. An important component to the repairs is working to mitigate damage from future storms.

“With the siding, most of the money will go to figure out how to prevent water from getting in there again,” Brady said. “The city has been really smart about it.”

The heating, ventilation and air conditioning unit is in need of repair, as well as the gutters and downspouts on the exhibit hall roof that need to be installed.

Another much-needed renovation on the north side of the building is the veranda that has been closed to foot traffic as a safety measure.

“The veranda has separated from the building, so that will be fixed,” Brady said. “It is not currently open to pedestrians until it is fixed, which will be over the next several months.”

The roof of the convention center is another concern.

“It is possible the entire roof will need to be replaced, but that will be several months down the road,” Brady said.

In addition to physical changes at the convention center, the facility’s management company, SMG, recently combined with AEG Facilities to create a new, stand-alone, global facility management and venue services company, ASM Global, according to a news release.

ASM is headquartered in Los Angeles with key operations based in West Conshohocken, Pensylvania, a suburb of Philadelphia. The company also has corporate offices in London; Manchester, England; Brisbane, Australia; and Sao Paulo, Brazil.

The Wilmington Convention Center is the largest convention center on the North Carolina coast, and is continuing to grow with many conventions choosing Wilmington over nearby Myrtle Beach.

The new Aloft Coastline Hotel with 125 guest rooms could be open this year and will increase the capacity to bring in even larger groups for the convention center.

“It is imperative that we keep our convention center up to date, refurbished and looking good,” Saffo said. “Tourism is a top industry in our area, employing over 6,000 people, and it is important for us to have an upgraded and very good convention center here.”

The increased business at the convention center is an asset to the Wilmington area, so any upgrades are considered investments in the city itself.