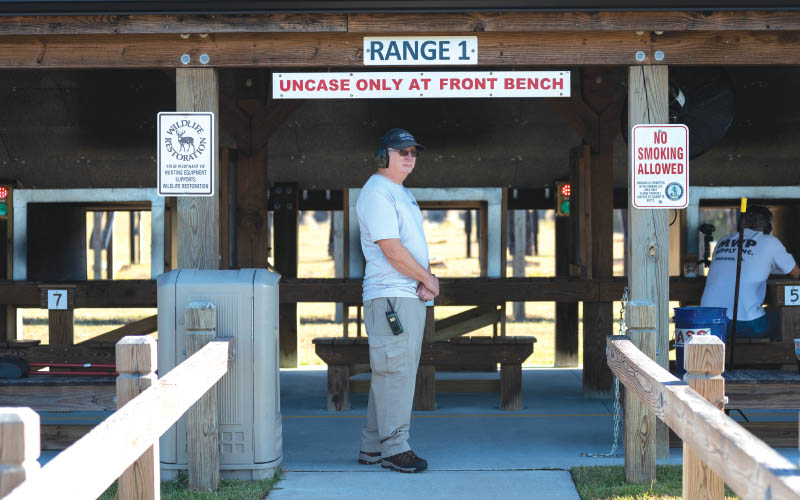 The Holly Shelter Game Land, at about 64,000 acres, makes up nearly 12% of the county’s acreage, according to Pender planners. The game land appeals to hunters, anglers, sport shooters and more.

“The Holly Shelter Game Land is a treasure trove of adventure for hikers and nature lovers,” said Tammy Proctor, the county’s tourism director.

“Our hunters use the game land. The Mountains-to-Sea Trail crosses through the game land, a favorite of thru-hikers. The Holly Shelter Shooting Range is unique to the region. It attracts sportsmen and women from Central and Southeastern North Carolina,” she said. “Both impact our tourism – one for hikers across the nation and the range attracting local visitors.”

On top of having a large longleaf pine ecosystem and pocosin habitat, it is also home to several endangered, threatened or rare species, such as the federally endangered red-cockaded woodpecker, he said.

The game land is also widely used for hunting deer, quail and other regulated hunting game. In recent years, the game lands have been growing as a destination for a wide variety of outdoor recreation, Wilson said.

To N.C. Wildlife – which works to conserve and manage natural resources and designated habitats, such as those in Holly Shelter, and promotes outdoor recreational opportunities – the game land is “a prime example of multiple-use because of all the activities going on there,” he said.

It’s one of nine areas being studied in a comprehensive game lands use study, through a contract initiated by N.C. Wildlife with N.C. State University in 2017, he said.

“The study is over a three-year period with the primary purpose of determining economic contributions and the nonmarket value of game lands,” he said, adding that the project is not slated to be complete until 2020.

The Holly Shelter Game Land include strails, boat access to the Northeast Cape Fear River and a shooting range.

So far in 2019 through September, the range reported nearly $71,000 in revenue, which mainly pays for operations and maintenance. Any profits are required to go back into the range for repairs and other needs, Turner said.

“We’ve been pretty steady,” Turner said. “Typically, October, November are our busiest months because of hunting; a lot of people are coming in and sighting-in their rifles.”

The range employs 10 part-time workers, and is hiring.

The county, however, is looking at ways to bring in more visitors, and is discussing possibly increasing marketing efforts, offering classes and one-day events, or adding some additional facilities.

When hunting season dies down, the game land becomes a destination for hikers and bikers.

The Holly Shelter section of the trail was memorialized in 2017 by the state. The path is 19 miles from Shaw Highway to U.S. 17, Jones said.

The Friends of the Mountain-to- Sea Trail hosted its annual gathering in Surf City in the spring, which drew more than 270 people to the county.

“It was a real boost for our economy right after Florence,” said Proctor of the meeting’s impact. The group will return in March.

Holly Shelter Game Land was a big feature of the events, and will be again next year, Jones said.

There still is a lot of work to be done to promote the MST and Holly Shelter Game Land in Eastern North Carolina, he said.

“Holly Shelter Game Land and the MST in Eastern North Carolina in general, we see it as a great new sustainable area of the economy to grow,” he said. “Albeit, not a huge one. But in a lot of ways, being able to balance the tourism to include something other than the beaches that can be a good off-season draw.”