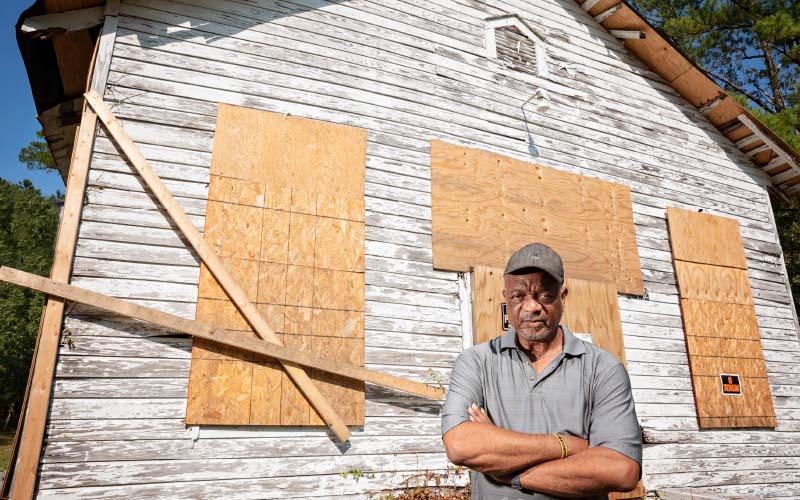 A heritage organization led by Alfonso Beatty, shown at historic Reaves Chapel in Navassa, wants to restore the chapel and eventually make it a stop for tourists wanting to learn about the area’s African American culture. (Photo by Michael Cline Spencer)
Correction: This version of the story corrects the recipient of the Historic Wilmington Foundation grant to the Coastal Land Trust. An earlier version stated that the grant was given to the Cedar Hill/West Bank Heritage Foundation.

Navassa officials are optimistic about the impact a historic preservation project will have on the town’s economic development. Since the purchase last March of historic Reaves Chapel by the Coastal Land Trust, the structure is seen as a centerpiece of tourism efforts by the town and by the Cedar Hill/West Bank Heritage Foundation.

“One of the things I have learned is in small rural areas such as ours, to attract tourists, you need to develop as a destination,” said Navassa Mayor Eulis Willis. “That’s what we have been doing: developing heritage tourism with some of our preservation projects.”

In 2013, Willis helped establish the Cedar Hill/West Bank Heritage Foundation to further this goal. The town’s planning process was spurred by the opening of Interstate 140, giving coastal travelers direct access to the historically African American town.

Reaves Chapel was built along the banks of the Cape Fear River soon after the Civil War by people who had formerly been slaves at Cedar Hill Plantation. They, along with former slaves from neighboring rice plantations, made up the congregation. In the early years of the 20th century, the congregation moved the chapel to its current location on Cedar Hill Road in Navassa, using logs and oxes.

It continued in use as an AME church until the mid-1990s, but has since fallen into disrepair.

The foundation and Navassa officials have big plans for the landmark building. They are looking to make it a state historic site that will interpret aspects of African American history in northern Brunswick County. Once the chapel is restored and open, the foundation hopes to continue developing the site, perhaps adding a reproduction Rosenwald school.

“But for now, the primary focus of my organization is the chapel,” said Alfonso Beatty, foundation president. “We are trying to get it up to state and national standards so it can be listed on the National Register of Historic Places.”

Beatty said that once the structure is stabilized, it will be repaired and its original walls and floors restored. The original stained-glass windows, which have been in storage, will be reinstalled.

While the chapel will not be used for regular church services, Beatty said, “It will be open on special days and for special events, like weddings, and it will tell the story of the people who formed this community.”

Willis said that he envisions a heritage tourism program that would promote the chapel’s importance but also interpret Navassa’s history as northern Brunswick County’s industrial center. From the late 19th through the mid-20th centuries, the town was both a center of fertilizer manufacturing and a railroad hub.

“Cedar Hill Plantation was a rice plantation. We want to partner with the North Carolina Rice Festival, which Leland has taken over,” Beatty said.

The foundation’s partner, the Coastal Land Trust, used a grant from the Orton Foundation to purchase the chapel and surrounding property. With initial stabilization work underway, the foundation is seeking other partners – who could take advantage of state and federal historic tax credits – to finance work on the building. Since the foundation is a 501c3 organization, it is not eligible for the credits but can transfer them to a for-profit party.

“What we really need now is partners and funds,” Beatty said.

Most of the Coastal Land Trust’s efforts go into acquiring land for conservation easements, but it is involved also in preserving places along the Gullah Geechee Cultural Heritage Corridor, said Jesica Blake, the trust’s director of stewardship and community conservation.

“The Reaves Chapel restoration is such a strong example of the good that can happen when several (parties) come together for a common goal,” said Beth Rutledge, HWF executive director. She added that HWF provided a $10,000 grant to the Coastal Land Trust for the project.

“Heritage tourism is an extremely strong economic driver,” Rutledge added. “The thing about historic tax credits is they make it financially attractive for developers to reinvest in their community. Putting local craftspeople to work, local contractors.” 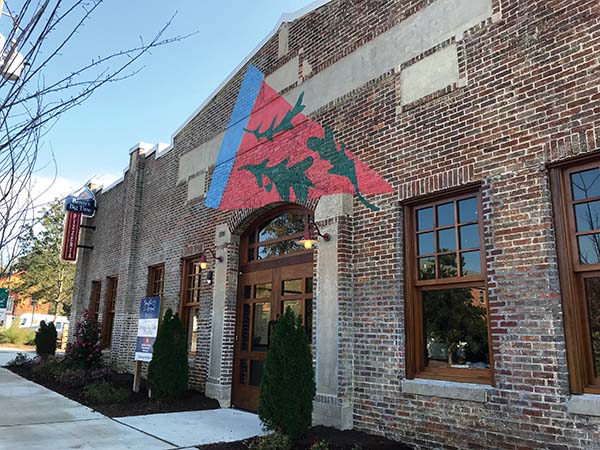 Off South Front Street for example, at the end of 2017, Benny’s Big Time Pizzeria opened in the former Block Shirt Factory, she said. “Within the same year, Love, Lydia opened. Both were adaptive reuses and both have been a catalyst to draw other businesses to South Front. Businesses are also setting up shop in new construction. If you look at this neighborhood, the revitalization of this part of town began with two old buildings that had been sitting vacant.”

Investments in maintaining downtown Wilmington’s historical resources can also pay other dividends, Rutledge said, pointing out that Universal Pictures’ decision to film its next two Halloween films in Wilmington hinged in part on the historical look of the downtown landscape.

Ed Wolverton, president and CEO of Wilmington Downtown Inc., is a proponent of the redevelopment of historic buildings, which he said has been a cornerstone strategy for downtown revitalization efforts across the country.

“[Wilmington is] certainly an example of that ethos and we have been a continual champion of the reuse and restoration of these buildings,” he said. “They provide an authenticity for downtowns and that is why so many other communities have followed that approach.”

Real estate investor James Goodnight has been a prime mover in recent restoration efforts in downtown Wilmington, Wolverton said, pointing to how Goodnight has leveraged tax credits to rehab his properties on Princess Street and South Front Street. There were tenants ready to move in when work was completed on these properties.

Regarding the 21 S. Front St. building, Wolverton continued, “If you recall, on the ground floor of that building was a lower-end bar and the two upper floors had been empty for 20 years or more. When James Goodnight came in and bought the building, he used historic preservation tax credits, and [the renovated building] became a way to recruit a high-tech business. Through the years, the tax credits have been exceptionally powerful for downtown projects.”

Wolverton said that tax credits are available at both the federal and state levels. “The state tax credits are supposed to expire at the end of this year, but the [N.C.] legislature has approved an extension to that program and the extension is part of the ongoing budget discussions at the state level.”

Many times investors forego the lengthy process of applying for tax credits, but they will still renovate a building to maintain its historical appearance so it will reflect the predominant architectural style of the block or neighborhood, Wolverton added.