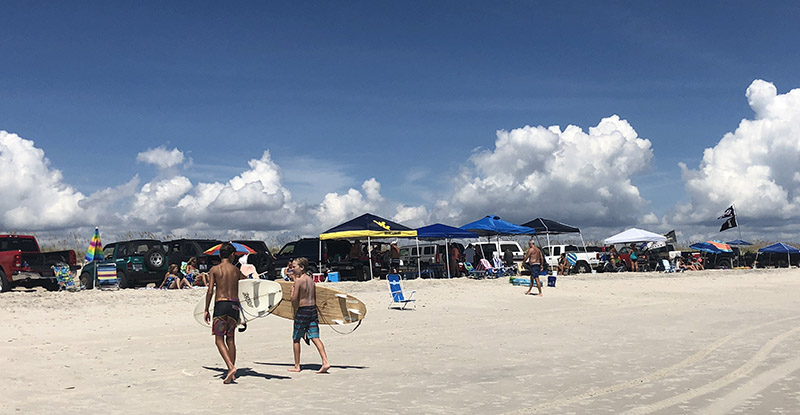 “Thanks in part to the Wilmington and Beaches Hurricane-Comeback Recovery Campaign – along with word-of-mouth from residents and visitors who have traveled here in recent months since the storm passed – the message is spreading that the tourism industry in Wilmington and our island beaches have made a remarkable recovery,” said CVB spokeswoman Connie Nelson. “For this reason, we anticipate a strong spring and summer season.”

According to Nelson, all of the county’s major attractions and landmarks are open, most of which have already been welcoming back visitors for several months. Among them, the N.C. Aquarium at Fort Fisher, Bellamy Mansion, Airlie Gardens and the Battleship North Carolina.

All have been enticing factors for visitors in fueling the area’s rapid rebound.

“We were very fortunate that most of our iconic attractions sustained minimal damage and were able to reopen soon after the storm,” Nelson said. “Airlie Gardens was closed for the longest period of time, but thanks to countless hours by dedicated volunteers and staff, they were able to reopen in time to host their signature Enchanted Airlie holiday event.”

The signature event, which began in 2005, draws visitors from across the state, nation and globe.

Another needle used by officials to gauge the summer travel prognosis is room occupancy tax (ROT). For example, available data showed Wrightsville Beach’s year-over-year ROT dwindling at the end of 2018 – with a 17.4% drop in December over the same month in 2017, followed by a 9.2% increase in January.

With the CVB’s two-phase Hurricane/Comeback Recovery Campaign wrapped, the organization can fully focus its efforts on promoting the area as a summer travel destination, officials said.

“During our peak season – summer – we focus on primarily digital and social media campaigns, along with email marketing that targets family and multi-generational travel,” Nelson said.

With visitor spending driving the local economy, those targeted efforts are a boon. According to the most recent statistics released by Visit North Carolina, 2017 visitor spending reached $578 million for New Hanover County.

The annual statewide study, commissioned by Visit North Carolina, also revealed that the $578 million figure was a 4% increase in tourism spending over 2016.

Additionally, the industry fueled more than 6,300 tourism-related jobs in New Hanover County, with a $141.3 million payroll. In 2016, the county experienced a 6.3% gain in visitor spending over the previous year, marking a sixth consecutive record-breaking year, according to the report.