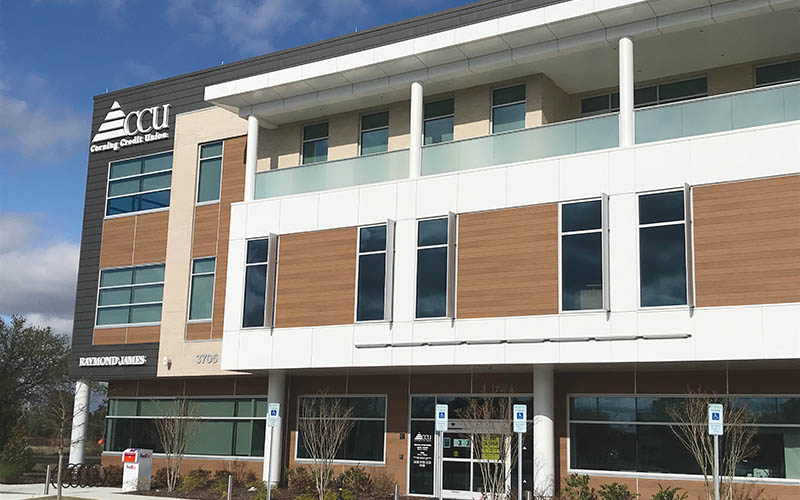 Mortgage originators, like those at Corning Credit Union (shown above), have been overwhelmed with requests for refinancing and new loans because of the current low interest rates.
As the Federal Reserve took action in mid-March to re­store public confidence in the U.S. economic system and counteract the damage wrought as governments responded to the COVID-19 epi­demic, two local financial advisers provided some perspective on the reasons behind these actions.

“The Federal Reserve’s recent rate cut of 100 basis points (1.00%) was an unprecedented move in an effort to restore confidence in our economic system and counter the damage being done by the corona­virus,” he wrote in an email. “For context, this was the most dramatic step that the Federal Reserve has taken since the 2008 financial crisis and came just 12 days after the last emergency rate cut of 50 basis points on March 3.

“This action, which cut rates to a range of 0-0.25%, a level we haven’t seen since 2008, leaves no room for further rate cuts if the effects of the coronavirus pandemic continues to affect our economy for a longer peri­od of time,” he added.

The intended result of the Fed’s moves, according to Zachary, is to lower borrowing costs for banks, benefits that theoretically trickle down to businesses and individuals to encourage spending.

“As an added benefit, [the rate cut] makes bond investments less appealing and may cause investors to buy into stocks to find higher yields, buoying the stock market,” Zachary said.

While the size of the cuts over such a short span of time is unprece­dented, Vinton Fountain reminds in­vestors that “we’ve been here before.”

“While this particular crisis is different in terms of its context, its implications are the same,” said the CAPTRUST principal and financial adviser “It’s important for everyone to refocus on goals: financial and life goals versus what the news of the hour, minute and day is, because this too will pass.

“This country has a system by which our economy can adjust and adapt to whatever the circumstances are,” he said, adding he thinks the Fed did the right thing.

Zachary agreed that the Fed’s rate cut was probably a wise move.

“Many pundits are looking at [the current] stock market drop and saying the Fed’s latest ammunition didn’t help,” he said. “The reality is, without it, [the recent] sell-off could have been much worse.”

The Fed’s promise in its March 15 announcement that it would purchase at least $200 billion in mortgage- backed securities added fuel to an already roiling mortgage lending environment.

Uncertainty in the mortgage sector began at the beginning of March when yield on the benchmark 10-year Treasury plummeted, briefly reaching an all-time low of just over 0.3%. That rate was above 1.5% as recently as mid-February. The 10-year Treasury yield is significant to the U.S. economy for its use as a benchmark for mortgage rates and auto loans.

There was a huge rush among mortgage borrowers to take advantage of low rates and refinance, said Suzanne Neblett, branch manager of Guaranteed Rate in Wilmington. Some large national mortgage lenders, notably banks, couldn’t handle the volume, so some of their borrowers sought refinancing through other mortgage lenders.

Rates see-sawed through the first half of March, Neblett said, leveling out a bit after the Fed’s promise to purchase mortgage-backed securities to add liquidity to the sector.

Still, she added, there is considerable volatility in the market, and her office was having difficulty quoting rates for new and refinanced mortgages.

Bill Scott, a mortgage originator for Corning Credit Union, said the demand for mortgages and refinancing was “like a flood” in early March. The rate he was able to offer for a 15- year loan dipped as low as 2.375%; for a 30-year it was 2.875%. They have since risen.

“There was panic and fear in the market,” he said. “The stock market was selling off.”

Scott had 75 mortgage loans, worth $19 million, in the pipeline as of March 19, compared with 24 loans worth $8 million as of Feb. 28. During that same time period, according to Scott, Corning Credit Union’s mortgage pipeline grew from $36.5 million to $110 million.

Other mortgage lenders were equally amazed.

“In my 36 years with Alpha Mortgage I have never seen volatility like this,” said Michael Lopez, the company’s owner and president.

He said that his company was working at capacity when fears over the coronavirus hit, and since then, with increased demand, “It’s been crazy getting people locked in. The mortgage market is clogged; we have lots of business.”

Despite the Fed’s promise to purchase mortgage-backed securities, Lopez said that investors are not following suit.

“They’re buying dollars,” he explained, saying that it’s strange that mortgage market activity is rising fast but that the market is “so illiquid. The market hates uncertainty; nobody knows what’s going to happen. They are going to cash.”