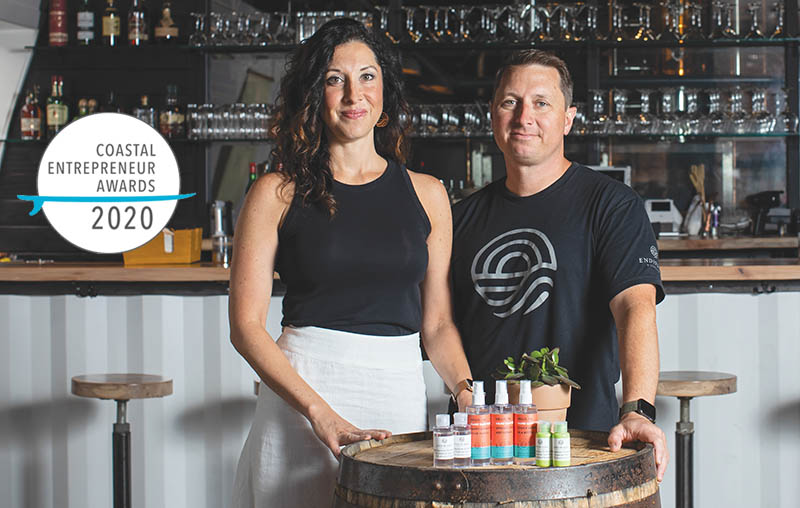 The rapid spread of the corona­virus had people around the world scrambling to stock up on cleaning supplies, soap and sanitizer, and be­fore long it was a commodity no lon­ger easily found in stores or online.

“We realized that we had the re­sources to make it ourselves,” Shane Faulkner said. “So why not? But in a million years I never thought I’d be making sanitizer in a distillery.”

Production of the sanitizer began in March, and by mid-April, the company had already made the decision that it was here to stay. It’s now a part of the permanent product lineup.

End of Days received requests from retailers both locally and across the country wishing to carry the product in their stores. The distill­ery responded with eight clever new labels, each with a bit of humor and wit, designed for the retail market.

“The wall mounts are something that have really been a great resource for local businesses as they have reopened in phase two,” co-founder Beth Faulkner said.

The distillery has donated thou­sands of bottles of sanitizer locally and to rural communities that have had trouble accessing it.

“While sanitizer is more readily available now than it was at the start of the pandemic, it’s likely that we could face another shortage in the future,” Beth Faulkner said. “So we’ve made a personal investment in making sure that we’re well stocked with the materials needed to quickly ramp up production and distribution to the community.”

While opening their Castle Street tasting room just weeks before a global pandemic certainly was not ideal, Shane Faulkner said he is glad to have found a way to make a positive contribution, and is proud to have been able to remain fully staffed. While they were forced to close the tasting room in mid-March, End of Days kept its bartenders working on sanitizer production, bottling, labeling and shipping. They also used the time to expand the bar and construct a rickhouse in the production area of distillery that will house about 140 barrels of aging spirits.

Throughout the pandemic custom­er, have been able to order spirits and to-go cocktail kits as well as hand sanitizer from the distillery’s website for curbside pickup. After all, sanitiz­er is not the only essential item End of Days produces.

“We feel privileged to have been able to provide an essential need to our local community and far beyond during this unprecedented time,” Beth Faulkner said.