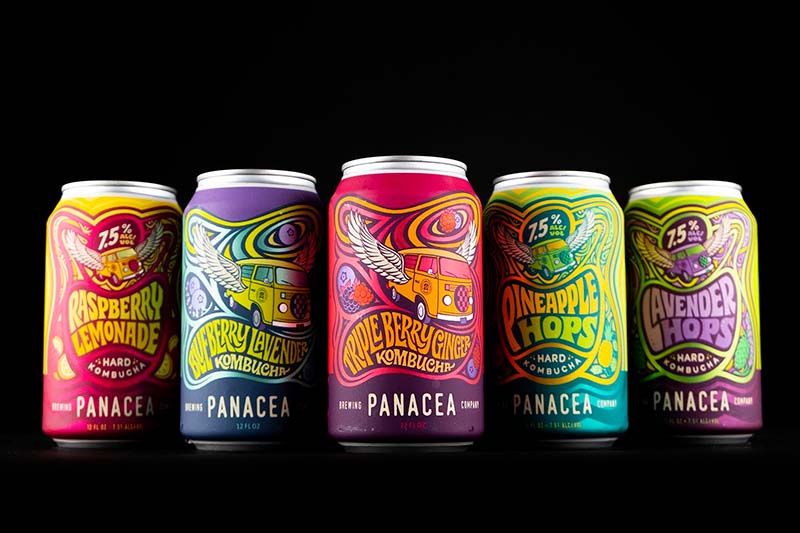 Panacea Brewing Co. has invested in a canning line to streamline its canning process. (Photo courtesy of Panacea Brewing Co.)
When Art and Robin Hill started their Panacea Brewing Co. in 2016, it started as a hobby. The Hills never guessed that just six years later they would have a storefront restaurant in a busy Wilmington shopping center and a flourishing brewing company to go with it.

“What we have is definitely not what the plan was,” said Robin Hill.

Hill says she and her husband planned for Panacea to be a hobby and for them to sell their non-alcoholic and hard drinks at the Riverfront Farmers Market. After a huge success with sales, the couple began to rethink their vision.

“We realized very quickly we would need a brick and mortar location,” she said. After outgrowing the first location, Art, a professional chef, decided to launch a full restaurant that continues to thrive despite the pandemic.

In February, the couple launched a new canning line, prompted by the pandemic. Previously reliant on guest taps at local breweries and restaurants, the business had difficulty reaching customers when operations were restricted.

"This put our little kombucha business in quite a scary position," the business shared in a blog post. "It became clear that we needed a better plan, one where we could reach more people, regardless of pandemic pressures."

Panacea invested in a Twin Monkeys Gunnison canning line, which was a major expense, to streamline the process after previously relying on a manual canning machine. The first batches to be canned were the non-alcoholic blueberry lavender and triple-berry ginger and three hard kombuchas, lavender hops, raspberry lemonade, and pineapple hop. Creature Theory designed the cans.

“Panacea has eight kombucha’s on the menu, three which are hard,” Hill said. The taproom also has three trade beers and non-alcoholic kombucha for non-drinkers. Hard kombuchas are the fastest-selling item on the menu, according to Hill.

Flavored with fruit and hops, the drink is a cross between seltzer and a sour beer, Hill said. Other menu items include salads along with burgers and tacos. “We have a lot of comfort food on our menu, but we are a full-service vegan restaurant,” Hill said, adding that Panacea’s menu allows someone who may be thinking of becoming a vegan an easy transition.

After a two-year pandemic slowdown, the Hills are looking forward to seeing new people stop in this summer. Hill said that while the pandemic has seemingly slowed, restaurant owners are now facing rising costs as well as inflation but Panacea is a unique space with beautiful artwork with a funky feel.

Plans are also currently underway to develop additional flavors of kombucha to add to the Panacea Brewing line as well as continue the restaurant. "If you are looking for something different, come see us, we look forward to you dropping by," she said.