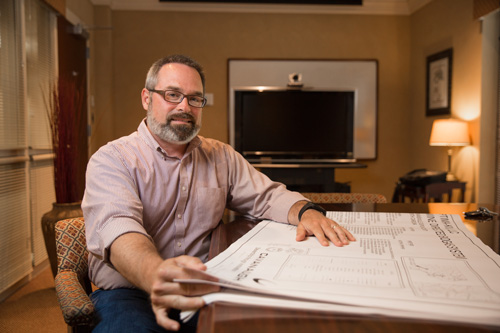 Gus Simmons, director of bioenergy | Year Founded: 1995 | No. of Employees: 13 (Photo by Chris Brehmer)
“You can’t make a silk purse from a sow’s ear,” said a 16th-century proverb. A half millennium later Cavanaugh & Associates is doing something even better – converting swine dung into fuel.

“We did not invent the decomposition of organic material. We design a process that controls that process efficiently as possible,” said Gus Simmons, director of bioenergy in Cavanaugh’s Wilmington office.

Rather than let the animal waste degrade in open-air lagoons, it is flushed into a vessel called an anaerobic digester, under the system. Denied oxygen, bacteria consume carbon in the organic waste and emit energy-rich biogas. The biogas is then pumped to a local refinery to remove carbon dioxide. Pipeline-quality methane is then inserted into the natural gas system.

“Currently all natural gas in North Carolina comes from outside the state. The Optima KV project is the first to put North Carolina gas into the pipeline for consumption,” Simmons said. “The project is also the first of its kind for the swine industry. We’re aggregating the gas and moving it to a central refinery – we move the gas and not the heavy waste.”

Optima KV is a specific entity set up for this project. It is co-owned by Cavanaugh, financial partners and the participating farmers. Five swine farms in Duplin County will convert enough hog waste to generate 11,000 megawatt-hours of electricity. That’s enough to power more than 880 homes and businesses annually.

Last year Duke Energy committed to purchase the methane captured from Optima KV. The utility has a strong incentive to use power derived from pig waste. North Carolina’s green-energy mandate, established in August 2007, requires investor-owned utilities to supply 12.5 percent of their retail electricity using renewable sources by 2021. The requirement includes a technology- specific target of 0.2 percent from hog waste.

Wilmington-area customers would actually participate in the project, albeit on a small scale. Duke Energy plans to use natural gas from Optima KV to power the Sutton Combined Cycle Plant in New Hanover County.

The project’s construction started in March, and gas should be flowing from the Kenansville farms by September, officials said.

The bioenergy potential for North Carolina is enormous with over 20 million hogs that require over 2,000 wastewater lagoons. Simmons said that bioenergy has a unique advantage over other renewable energy sources.

“With solar or wind energy, you have no choice but to use it as electrical energy. Bioenergy doesn’t generate electrons. It generates potential energy. Natural gas can be stored and used when you need it,” he said.

Cavanaugh & Associates was formed in 1995 as a civil engineering company. Today, with headquarters in Winston-Salem and offices in Wilmington and Asheville, the firm consults almost entirely within the water efficiency and bioenergy technology sectors.