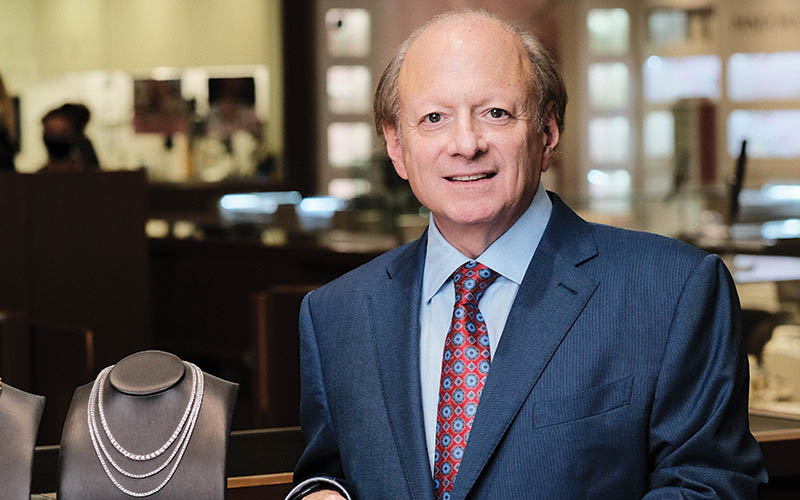 (Photo by Kevin Kleitches)
Reeds Jewelers is having a gem of a year. The Wilmington-based chain is celebrating its diamond anniversary doing what it has always done, according to its founding family: taking care of its employees and customers. It’s also growing.

“We’re in 13 states, and now we’re nationwide through e-commerce,” said Reeds’ CEO and President Alan Zimmer (shown above). “We believe we’re only as good as our people behind the counter and in the home office, and we have great people. We’re so blessed with the tenure of our people. It’s not unusual for (our employees) to have 35 to 40 years with the company.”

The third-generation, family-owned company now has 61 stores and 750 employees, about 150 of whom work in Wilmington, where Reeds has two stores and its national headquarters.

Diamonds have been in the Zimmer family for generations. Alan Zimmer’s father, Bill, grew up in the retail jewelry business and learned at a young age how to sell diamonds. In 1946 he and his wife, Roberta, purchased a small jewelry store in downtown Wilmington and changed the name to Reeds. The choice of location was a happy one, Alan Zimmer said.

“My father was from Niagara Falls, New York, and during World War II he was stationed at Fort McClellan, outside Birmingham, Alabama,” Alan Zimmer said. “He met my mother at a USO dance in Birmingham. They decided to get married before he shipped off. My mother’s family went to meet my father’s family in Niagara Falls, and her father said, ‘No way is my daughter going to live in Buffalo, New York.’ They found a store for sale in Wilmington. I always thanked my mother for that.”

The downtown venture was a success, and Reeds expanded: first with stores in Whiteville and Jacksonville and then elsewhere in North Carolina. All four of the Zimmer children grew up working in the business.

Alan Zimmer stayed with it, officially joining Reeds as head of merchandising in 1981 and taking the company’s leadership role four years later. While he has further grown the business, he said he has been careful to maintain its identity as a family store that values its customers.

“My father always believed in the Golden Rule: Treat others as you want to be treated. That means a customer in the store, an employee or an associate,” Alan Zimmer said. “He instilled it in us and we’re trying to instill it in the next generation. We believe the customer is always right.”

The next generation has heard plenty of stories that illustrated Bill Zimmer’s business philosophy as well as his commitment to philanthropy. Three grandchildren carrying on this legacy are part of Reeds.

Genna Zimmer is the company’s director of strategy. Her sister Brittney is one of Reeds’ buyers. Alan Zimmer’s nephew Mark Schreiber is vice president of store operations and improvement.

“Our stores are only as good as the store managers,” said Schreiber, explaining that the Zimmers’ family tradition is replicated at many Reeds locations, where employees are related to each other.

While Reeds has grown over the years, there have been a few bumps.

“We suffered in 2008 like everybody did,” Alan Zimmer said. “Then in March 2020 we had to close our stores due to COVID (restrictions), and I questioned what the future held. But our e-commerce took off in late April. Most of our stores opened in early May.” That ability to lean on its e-commerce side during the pandemic last year was partly a result of the company’s longtime focus on its digital side. One of the first jewelers to have a digital footprint, Reeds has been online for 20 years. And in 2014, it became the first fine jeweler to offer bitcoin as a payment option.

“Our bread and butter is our stores,” Genna Zimmer said. “But people can buy online and pick up in a store. We also try to replicate the store experience online, with virtual appointments. With a custom sale we will walk (the customer) through the different features of the diamond they are evaluating. We can send them under-the-microscope photos. Our niche is those high-touch experiences, whether through our technology or through virtual presentations online.”

“To determine expansion locales, we look at where are people shopping from online,” Alan Zimmer said. “We’re planning a new flagship store in Brandon, Florida, in the greater Orlando area because there is a pocket of customers shopping with us online. We hope to open that store in early November.”

“Our customers know we’ve been trustworthy for 75 years,” Genna Zimmer said. “There aren’t too many family businesses left; when I graduated from Wharton, I was one of two people going back to a family business.

“Mark and I talk about this: being part of something; helping our grandfather’s legacy live on,” she continued. “He never knew a stranger. At his funeral, people told us things like ‘He encouraged me to get my education.’ ‘He made me feel like a million dollars.’ He cared about people at a level that is almost unheard-of these days.”