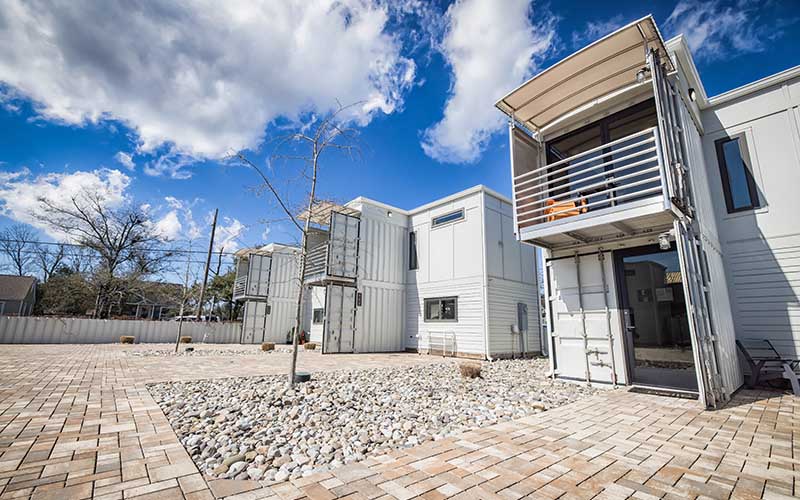 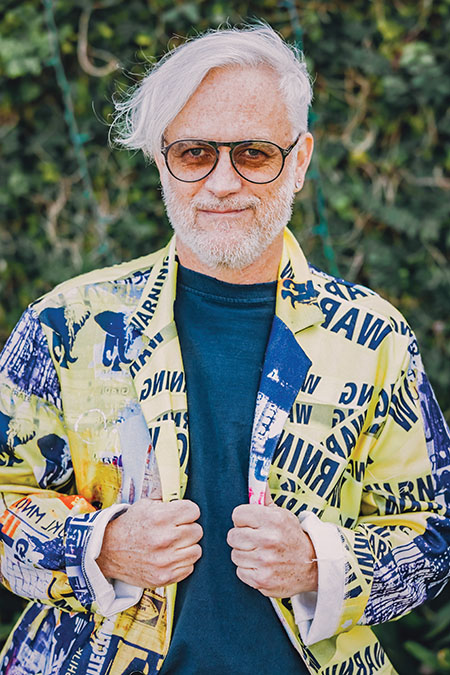 It was Wilmington architect Rob Romero’s vision to bring something unique to the city.

Drawing inspiration from French architect Le Corbusier and his idea that a home is a machine for living, Romero worked to bring that theory and aesthetic into the design of The Cargo District.

From unique mixed-use projects to local headquarters, the region has been growing with the work of many innovative building designers such as Romero.

He’s among the pool of local architects bringing unique touches to developments that are changing the Wilmington skyline and leaving a more modern mark on the city’s commercial architecture through either building reuse, expansion or new construction.


Starting in 2016, Romero (right) joined forces with Leslie Smith, the developer who had the vision for The Cargo District at South 16th and Queen streets. Romero helped bring Smith’s ideas to light.

“It’s a bold development,” said Romero, who brought his architecture firm to Wilmington in 2006.

His work with Smith on The Cargo District brought this urban mixed-use development that played off the trend of using shipping container architecture in a commercial setting.

The project includes nine, one-bedroom live/work units, each with nearly 600 square feet of living space. The building’s key pieces – the 20- foot shipping containers – cost about $30,000 each to rehab for this job, he said.

In his plans, Romero sketched windows at the container’s end to bring light into the spaces, in addition to slot windows, which were designed to minimize cuts to the container’s steel structure. The wooden floors of the container were also refurbished, he said.

There were a lot of city zoning and planning issues “because they have certain codes in this district that won’t allow exposed container sides,” Romero said of the challenges. “So, I had to come up with a way to semi-disguise it but not completely cover the container because we were trying to celebrate the container too.”

It’s one of several container projects Romero’s firm, Romero Architecture, has designed plans for, but The Cargo District is the only one developed in Wilmington.

In the future, however, shipping containers will also be used in a planned concept kitchen next to End of Days Distillery, which Romero also designed in the commercial part of the district.

“This city has a long history of ships and water and shipping containers … and so there’s something unique in that it ties that history to the modern usage of these things, and I think that’s rare,” Romero said. “The area is somewhat industrial, and that vibe carries through this project nicely.”


At South Second and Greenfield streets, the industrial vibe carries through with the development of the South Front District.

Architect Cothran Harris, of Wilmington-based Cothran Harris Architecture, was influenced by the “steampunk motif” when visualizing the industrial elements and working them into his designs for the South Front project, he said.

Harris signed on in 1999 to help bring about the vision of Tribute Companies President and CEO Mark Maynard that revitalized the surrounding blocks. 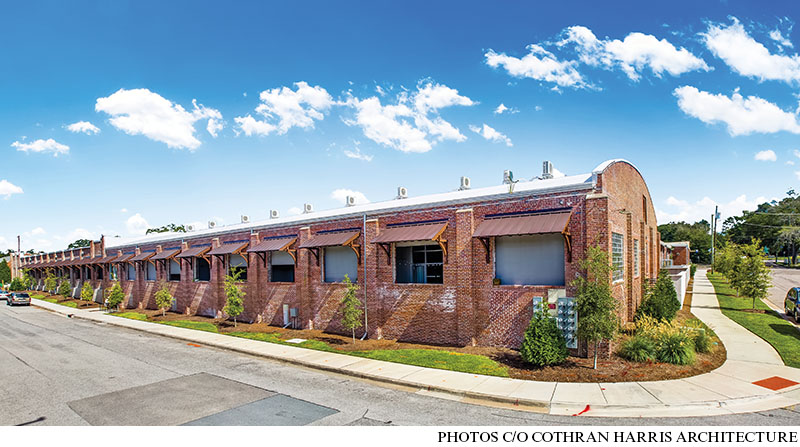 His work with Maynard on the neighborhood has spanned about 20 years. The first phase of South Front’s development began in 2008, Harris said.

Harris used in his design plans the existing industrial elements at the site, empty units that were the Wilmington Housing Authority’s first public housing project, and reworked them into upscale apartments.

Also, in an existing 1930s shirt factory next to the housing project, Harris redesigned the building into mixed-use, containing additional apartments and a recreational center for South Front apartments residents, as well as a commercial space.

His designs brought an industrial-urban look to the architecture of the old, once-empty structures.

Additional commercial space was added to the South Front project that also included shipping containers in the elements, but that portion was designed by a firm out of Raleigh. 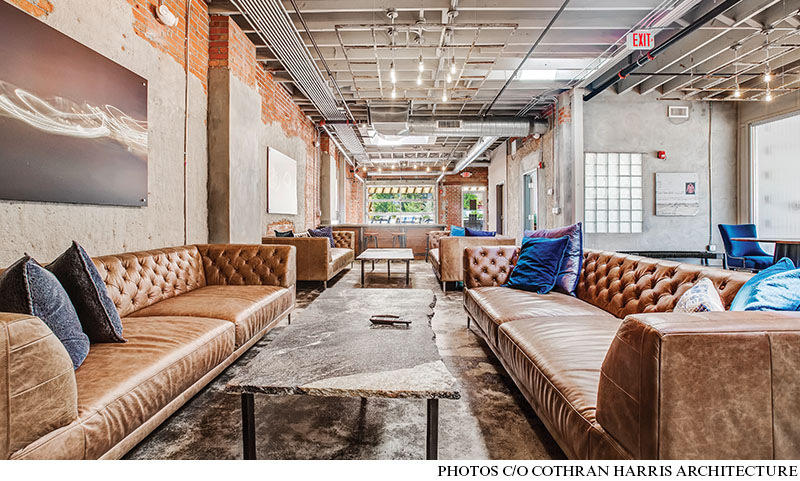 Within the district, Harris worked on the exterior design of Benny’s Big Time Pizzeria and turned a former home into the commercial space facing South Third Street that that will hold Mariposa Tapas Bar.

“A historical building or one of these factory buildings is a found object, and your job is to figure out what it wants to be and what’s the best way to bring it back to life,” Harris said. “It’s always special to be able to help bring a particular building back to life.”


Designs for a 14,700-squarefoot addition to Atlantic Packaging’s Wilmington headquarters building came about in 2018.

Based on the desire of Atlantic Packaging’s leader Rusty Carter to bring a fresh new look and more space to the growing company, Wilmington architect Chip Hemingway, of Bowman Murray Hemingway Architects, reimagined the building.

Hemingway’s work first came to life while drawing up the initial sketches freehand at his kitchen table. What he designed led to a twostory addition to the existing facility that would bring a modern look to both the company’s headquarters and the North 23rd Street corridor.

The addition included 37 offices, an executive suite, conference and meeting space and a gym.

Hemingway centered his designs around the idea of packaging to reflect the product the company creates, he said. 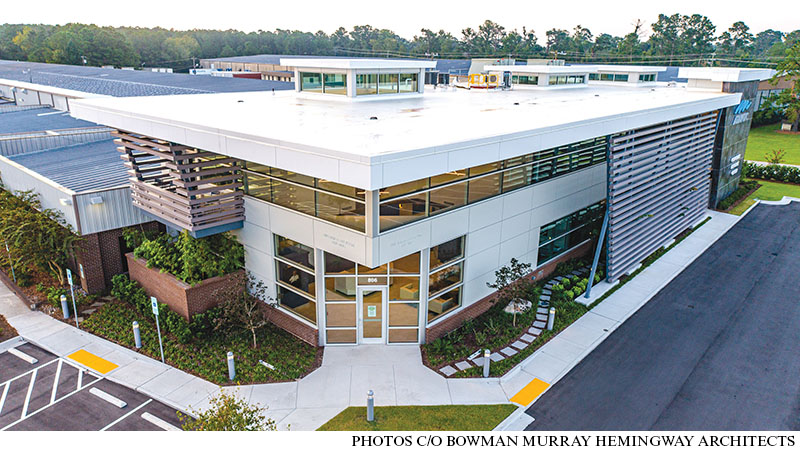 A challenge, however, came with bringing in all of what Atlantic Packaging needed as a company and fitting it into one space, he said. About a 100-foot section of the original building was cut off to make room for what the company needed in its home base.

Hemingway came up with an L-shape design that extended the company’s existing offices into a new section of Atlantic Packaging’s property along North 23rd Street.

The building included a large shade feature along the building’s street-facing side with a narrow garden tucked between the structure and the building. Hemingway designed this feature to buffer the building from the busy thoroughfare.

Three clerestories pop up from the rooftop, and large windows at the lobby area also bring natural light into the building, he said.

The headquarters addition opened in 2020. In the end, the design created “a dynamic architecture that speaks to not only Atlantic Packaging but also to the changing culture of Wilmington and how it’s growing to be a much more metropolitan area than it once was,” Hemingway said. “It has certainly dressed up North 23rd Street and reflects the direction that Wilmington is going.”


A project in downtown Wilmington, built with a portion of Cape Fear Community College’s $164 million bond backed by New Hanover County voters in 2008, changed the face and aesthetic of the North Third Street corridor.

It took about five years to design, build and create CFCC’s Wilson Center before the first performance was held in it, said Danny Adams, design leader and principal with the Wilmington office of LS3P Associates Ltd.

About a year was spent trying to bring the project in budget, he said.

“It was probably one of the most rewarding projects of my 25-year career,” said Adams, who joined the architecture firm in 2009. 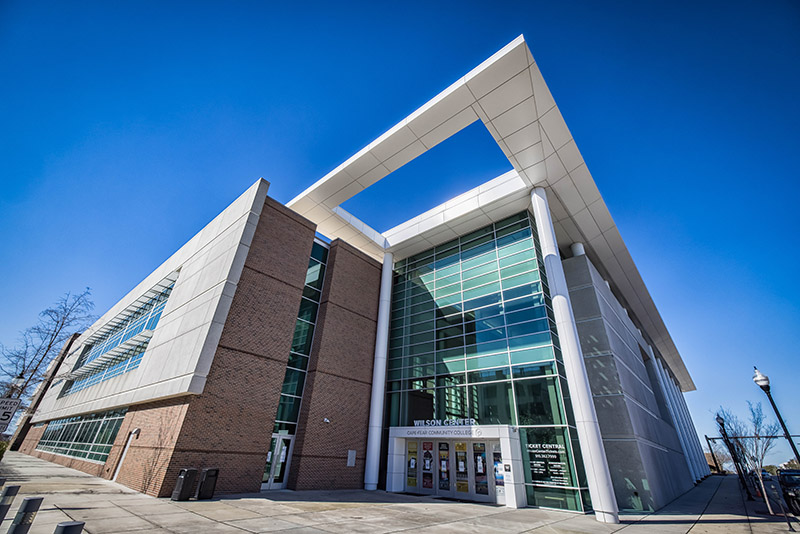 The four-story educational building and performance venue brought a modern look to the changing Third Street landscape as well as the setting of CFCC’s downtown campus.

Major components for the project included a 1,500-seat theater, a supporting house and an administrative and classroom wing for both theater and arts courses, Adams said. Also within the building are 30 classrooms, a black-box theater and – in the center of the building – a rectangular, 20,000-square-foot, open-air exterior courtyard.

“The venue was always intended to be a teaching facility first and foremost,” Adams said.

The Wilson Center’s unique components include the theater’s main lobby, which was designed to connect both the academic wing with the theatrical wing, he said.

The Third Street lobby, much of it encased from floor to ceiling with glass windows, was also created “to maximize that visual connection to the energy and the activity of the lobby with the city and urban environment around it.” 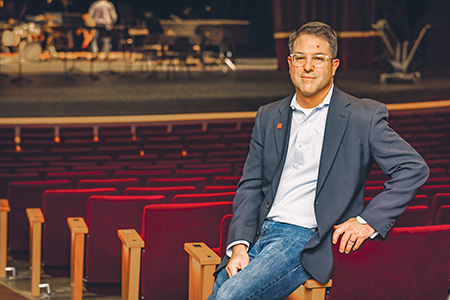 Adams was inspired by some of the poetic and romantic scenes used in performing arts, as well as the curves found in musical instruments, which influenced the overall look of the theater. He also designed the theater to create the best conditions for the spectator.

The same type of building materials used in constructing other campus facilities was used in building the Wilson Center. Yet, the final product brought a modern design to the college setting and the city, he said.

“I think this visionary goal of creating something that didn’t exist downtown, as part of that catalyst for the arts, was one driving factor that led to a much more modern use of the campus and the contextual materials,” Adams said. “Historically, we’ve been behind from some of our other regional cities like Raleigh and Charlotte. I think it’s symbolic that our modern architecture is becoming better established in Wilmington.”