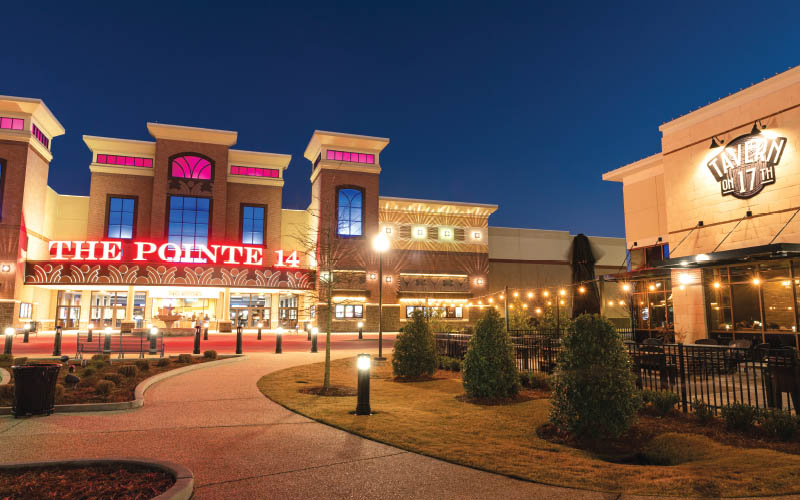 (Photos by Michael Cline Spencer)
Workers toiled on a recent morning inside a new retail building at The Pointe at Barclay.

At the same time, customers at the midtown Wilmington complex filled the drive-thru at Starbucks. Others ate at tables inside a bagel cafe.

The first movie would begin at The Pointe’s anchor tenant, a Stone Theatres cinema, after 11 a.m.

But no one, at any time that day, would be buying shoes, clothes, books, computers or really anything other than food at the mainly dining, services and entertainment center.

That’s because The Pointe at Barclay is an example of how retail is being redefined, with the traditional  tenant mix at shopping centers in Wilmington and across the U.S. taking stock of what shoppers want in 2020 and planning accordingly.

While some are declaring this year will see the continuation of a “retail apocalypse,” others say that’s an exaggeration, that the only chains that are suffering or dying are those that failed to adapt or buried themselves in debt.

“For over a decade there has been intense debate about the future of retail, shopping centers and ultimately retail real estate,” according to a report titled, “Retail Real Estate Transformed,” by the International Council of Shopping Centers.

The factors involved, the report states, include a shift toward convenience and accessibility, demand for experiential retail (one of the main buzzwords in retail real estate today), demographic changes, the integration of online shopping and a rise in the flexibility of omnichannel shopping (meaning a mix of online and in-store offerings).

As a result, many landlords and developers have learned to adapt rather than closing centers or getting out of the development game.

“Tenant diversification is good for the industry, as it is an example of adaptation to changes in consumer demand and demographics. In part because of these successful adaptations, the net number of centers continues to grow every year,” said ICSC spokeswoman Stephanie Cegielski. “We expect both tenant diversification and center growth to continue.”

As brokers often point out, “There are hands-on services that you need that you can’t get online,” said Bryce Morrison, broker with Wilmington-based commercial real estate firm Cape Fear Commercial.

“Certain parts of retail are struggling, but on the whole, I think retail is alive and well,” said Swain, whose company is planning CenterPoint, a $250 million mixeduse project – including retail – on Military Cutoff and Eastwood roads in Wilmington. “While there’s a lot of stuff you’ll buy online, there’s still a lot of reasons to go and shop at your local brick-and-mortar stores.” 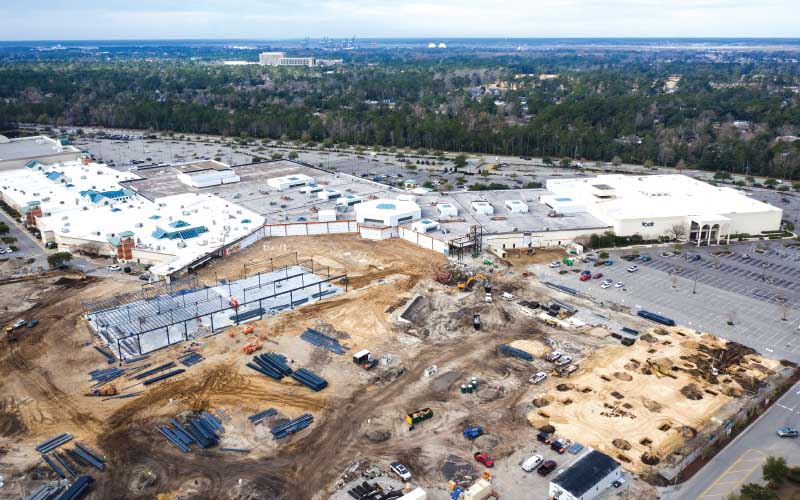 As stores, landlords and developers work to stay relevant, changes will also include continued redevelopment of older retail properties, including Independence Mall at 3500 Oleander Drive in Wilmington.

The mall opened in 1979. At the end of February, a transformation was underway at the more than 800,000-square-foot center, where the vacated Sears wing was demolished and the side facing Oleander Drive was reshaped to make way for new stores with exterior entrances.

“Independence Mall is a cornerstone in Wilmington, but to maintain this position, we must evolve,” said Helen Lewis, the mall’s general manager. “Our landlord, Brookfield Properties, has made a significant investment to ensure that Independence Mall offers our community a revitalized tenant mix including new restaurants and community gathering space.”

Lewis acknowledged that the retail landscape, especially in the shopping center sector, changes at a rapid rate.

“Today’s consumer wants convenience and everything under one roof, and this goes far beyond traditional retail. We’ve positioned the Independence Mall redevelopment to be a one-stop shopping destination that meets the changing needs of our community,” she said. “We are currently working to provide a plethora of experiences like entertainment, fitness and a variety of dining options. This will give shoppers a reason to stay longer and return frequently.”

Some of the new tenants are businesses that aren’t already part of Wilmington’s retail scene, including Five Below, a Philadelphia-based value retailer geared toward teens.

In a separate building on the mall’s campus, Walk-On’s Bistreaux & Bar is also expected to open, possibly this year.

“With nearly 170,000 square feet of retail space under construction, our leasing activity remains very busy and exciting with anticipated openings as early as in the fourth quarter of 2020,” Lewis said. “Revitalizing our tenant mix to appeal to consumers of all ages is a top priority … In addition to a mix of retailers and restaurants, we are also actively pursuing fitness, entertainment and office uses that will invigorate and revitalize the center.” 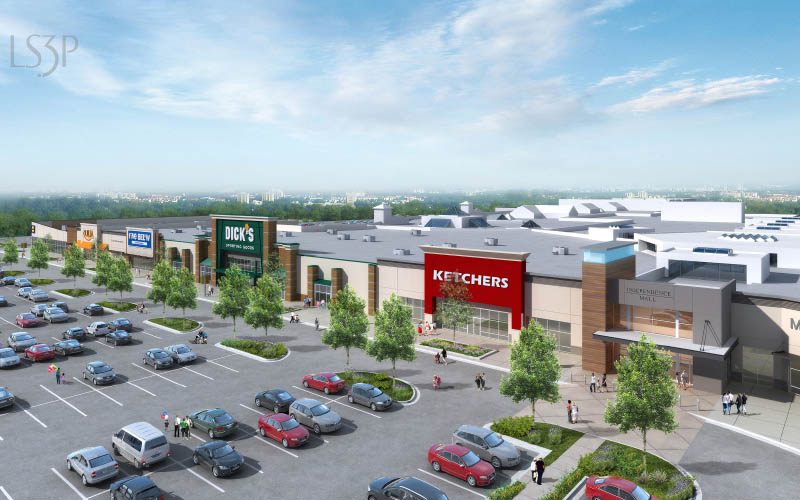 
Around the mall, which sits on more than 40 acres along one of the busiest corridors in the city, there remains the possibility of a mix of uses outside of retail.

“Within the current redevelopments of Brookfield Properties’ retail portfolio of over 170 assets, we continue to explore the viability of residential, office and other uses which are appropriate to the specific market,” said David Ortner, senior director of development at Brookfield Properties. “Wilmington is a dynamic and growing community, and the Independence Mall should reflect that as well.”

The same could be said for other major centers in the city. Just before 8 a.m. on a weekday, a worker at H&M carried a mannequin around as she prepared to dress it in the clothing store’s first-floor window at Mayfaire Town Center.

Not too long ago, a vacant patch of grass about 6 feet away from the Mayfaire H&M was supposed to hold more stores, possibly offering boating accessories or featuring window displays with more dressed-up mannequins.

But more recently, the property has been marketed as a potential spot for office space.

“We’re just offering it as an alternative to the retail for Mayfaire  being that the office portion of Mayfaire has filled up,” said Steve Hall, partner in Wilmington-based commercial real estate firm Maus, Warwick, Matthews & Co. and the listing agent for the property.

An office for Nest Realty recently opened in part of the center, in a longvacant building that was revamped.

“Mayfaire has a wonderful mix of national, regional and local retailers. We strive to bring exciting concepts that resonate with today’s consumers, such as entertainment uses, new-to-the-market retailers and non-retail uses such as real estate offices,” said Paige Coniglio, Mayfaire’s specialty leasing manager and marketing director.

And while some traditional retail tenants have gone by the wayside at Mayfaire, including Eddie Bauer and J. Crew, they have been replaced or soon will be. Athleta, which is new to the Wilmington market, is expected to open in the former J. Crew space in mid-March, while Loft opened last year in what was Eddie Bauer’s storefront. 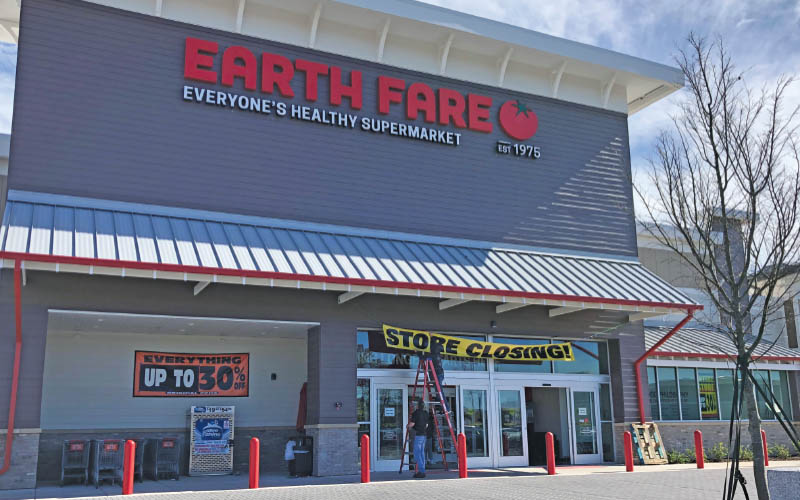 It's Not All About Shopping


Swain said his niece, a freshman in high school, goes to Mayfaire with her friends “just like we used to go to the mall. They get together, and they go have coffee or go see a movie.”

“There’s that experience of being together that Amazon or anybody online is not going to be able to  capitalize on,” he said.

But a project like CenterPoint, which is set to include shopping, dining, residential units, offices, a hotel and more, can capitalize on the need for real-life connections, Swain said.

Part of that effort is through programming. Swain uses the example of North Hills, a mixed-use center in Raleigh created by developer John Kane.

“Not only is it just a great location, like CenterPoint will be, but one of the attractions of North Hills is there’s always something going on,” Swain said. “He’s got a team that works around the clock to program these events.”

Events are also part of the mix at Mayfaire.

Coniglio pointed to Mayfaire’s 2.8-mile walking trail and its hosting of the Coastal NC Run/Walk for Autism, Girls Night Out events and holiday visits with Santa, features that “bring people together and keep customers engaged with the community and our brand.”

“You will continue to see newer, more dynamic uses enter the market, each hosting an array of experiential components that will generate traffic and build loyalty,” Coniglio said.

Drawing customers in a variety of ways is likely to remain a priority, as services continue to dominate the tenant lineup.

According to the ICSC report, “With the growing importance of services, shopping centers have evolved into community hubs more than ever before. It harkens back to how the first marketplace fulfilled the basic needs of the consumer and played a vital role in everyday life.”