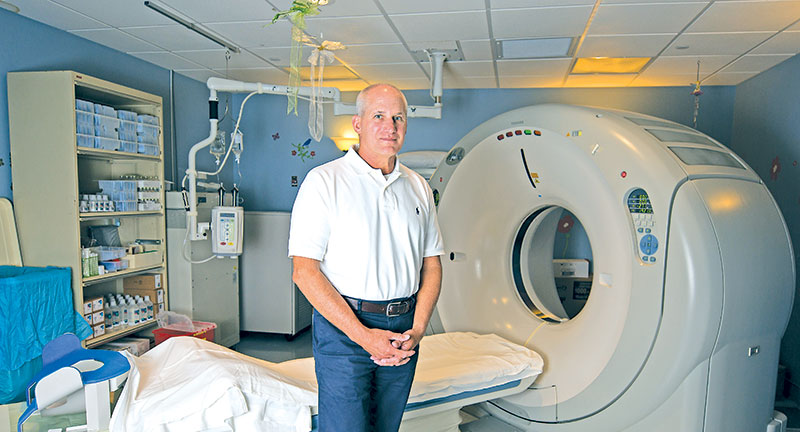 In his decade with Wilmington Health, CEO Jeff James has seen new locations added to the practice’s portfolio. (Photo by Megan Deitz)


When Don Gottovi and Norm Robinson started Wilmington Health Associates, it was out of a modest, low-slung building.

It was 1971 and not long after the physicians – early in their careers – had chatted in the beer line at the UNC Department of Medicine’s annual picnic about opening up shop in Wilmington.

Their first space was off Doctors  Circle, and as their team grew to a handful of doctors, things quickly got tight, Gottovi recalled recently.

“We were all jammed in this little rented building,” said Gottovi, who is retired but still lives in Wilmington.

It was then they bought a lot from the Cameron family to build a one-story facility at 1202 Medical Center Drive, still the home base for the practice, which looks much different more than four decades later.

As the region’s population grew, the practice – now called just Wilmington Health – has grown as well.

In total, the private, multispecialty medical group practice owns about 100,000 square feet of space in buildings throughout the region and leases another 200,000 square feet, officials said.

With about 180 health providers, including 115 physicians, the practice has more than 20 locations from Jacksonville to Southport.

And it’s currently on another expansion run.

“Our footprint has been expanding for a number of years already, and the challenge though with that was in some instances it has expanded  very inefficiently,” said Jeff James, Wilmington Health’s CEO. “So one of the main reasons for some of the building projects that you see from us is consolidation. And the other one would be preparation for more anticipated growth.”

That expansion, while largely organic as patient volumes and  specialty needs grow in specific parts of the region, follows a certain pattern: making smaller moves until time to invest in a centralized space.

“If you look at our history, we look  at existing space first,” said James, who last month marked 10 years at Wilmington Health. “And once we hit a critical mass within a particular geographic area, then we will look at a development project which is more likely to match our future projections for growth.”

The same pattern has held true as Wilmington Health has grown outside  its New Hanover County confines to make inroads into Hampstead, northern Brunswick County and Jacksonville.

In Hampstead, for example, Wilmington Health had several  different locations for providers until it signed a long-term lease for a new building on Ravenswood Road. 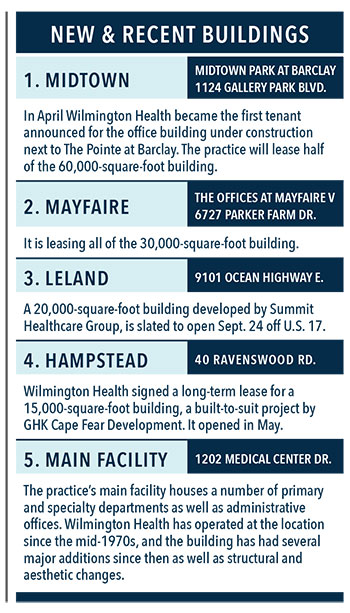 “Same thing with Jacksonville,” James said. “We didn’t build a building there. We moved into existing space until such time as the critical mass that we had generated was enough to move us forward.”

Recent projects include 30,000-square-feet medical office spaces in both the Mayfaire and midtown areas, parts of Wilmington that have been a magnet for new development in recent years.

In both of those projects, Wilmington Health is moving into new construction.

On Parker Farm Drive, the practice will take up the entire structure for one of The Offices at  Mayfaire buildings. Wilmington Health already has had a presence in the office park, with providers at the Mayfaire I and II buildings.

“The first time we had a  presence in the Mayfaire area [was] in one of their brand new buildings, but we only occupied one tiny little bit of it at first,” James said. “And then we moved to a bigger space there as they built that.”

In 2019, Wilmington Health is expected to consolidate its services there when it moves into Mayfaire V.

Over in the midtown area, the practice plans to fill half of the  60,000-square-foot Midtown Park at Barclay office building, establishing  OB/GYN and other specialty providers there.

Chris Bunch, Wilmington Health’s COO, said they were drawn to the Barclay location in part because of the growth coming to the southern end of New Hanover County.

Meanwhile, Wilmington Health’s pattern of starting small and retooling for growth in services could come next to the northern end.

“For example, right now, Porters Neck is getting to be that same type of situation where we have taken down multiple buildings in existing space, and if a patient of ours needs a CT scan, right now, they have to go across [U.S. Business] 17. And that’s not particularly the best patient experience,” James said. “We can envision a time in the fairly near future where once we’ve got some of these other projects out of the way, we take a look at what we’re doing in Porters Neck and try to make it a little bit better for the patients.”