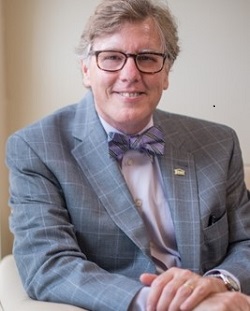 Van Dempsey
Van Dempsey, dean of the University of North Carolina Wilmington's Watson College of Education, has been named to a new education commission created by the N.C. General Assembly during the 2017 legislative session.

Dempsey is one of 16 individuals from the educational community appointed to serve on the Professional Educator Preparation and Standards Commission, according to a news release from UNCW.

The commission, formed through Senate Bill 599, will make recommendations to the State Board of Education on all aspects of teacher preparation, licensure, continuing education and standards of conduct, officials said in the release.

Senate Bill 599 was sponsored by Sen. Chad Barefoot (R-Wake), who announced the appointments in a news release on Aug. 4.

“It is an honor to be named to the Professional Educator Preparation and Standards Commission, and to have the opportunity to represent the Watson College and our Professional Development System partners in this work,” Dempsey said.

“It is also an honor to serve on the commission with outstanding colleagues in the education profession across North Carolina. We have a critical challenge to do important work for our state, and to provide collaborative leadership to ensure that we have well-educated, professionally supported educators who create great learning opportunities for children. I look forward to doing that work, and engaging the Watson College in making sure the best ideas, creativity and professional talent of our colleagues inform our decisions and recommendations as a commission,” he added.

Dempsey was appointed to the commission by the N.C. House. He joins K-12 teachers, principals, administrators and superintendents as well as deans of colleges of education around the state. The legislation states that the purpose of the commission is to “involve stakeholders in establishing high standards for North Carolina educators,” officials said.

Dempsey has served as the dean of UNCW's Watson College of Education since 2015.