Behind Suzy's Move To Build A Local Hub 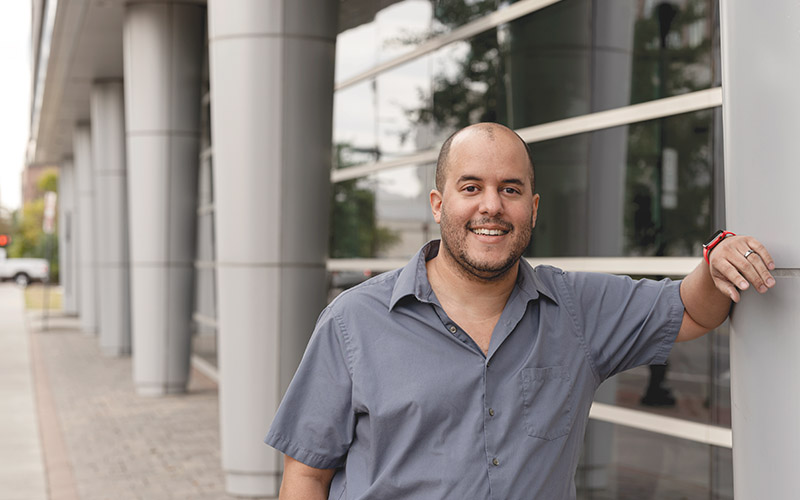 William Mansfield, chief technology officer of market research firm Suzy, said Wilmington’s emergence as a tech hub was an influencing factor in his firm’s leasing of a large office downtown. (Photo by Michael Cline Spencer)
Wilmington resident William Mansfield liked the Port City so much that he brought his workplace to the region.

Mansfield is the chief technology officer of Suzy, a New York-headquartered market research firm that announced in October it will open its technology hub in downtown Wilmington.

With a signed lease of 12,000 square feet on the top floor of 319 N. Third St., Mansfield hopes to change what is colloquially known as the “Bank of America building” – despite the bank’s branch closure last year – to the “Suzy building.”

Wilmington’s emergence as a tech hub was an influencing factor in the company’s move and recruitment efforts, Mansfield said.

The company currently has the goal of hiring 40 workers for its hub over the next three years, with an average annual salary of $120,000, well above New Hanover County’s overall average annual wage of $54,891, according to a press release.

Mansfield’s path to his CTO role started 20 years ago when he began working at a temporary employment agency answering phones and then moved to the tech department. After several tech engineer and developer roles, including senior technical architect at MRY in New York, he joined Suzy as senior vice president of product innovation and technology in 2018 and became CTO in September.

“As CTO I govern and manage the overarching technical expertise and where the company’s going technically. So making the hard choices on the path of the company, what tech to use, what tech not to use and insight into how the tech gets built,” Mansfield said.

The company’s focus on technology, real-time research and providing its service under a software-as-a-service model is what sets it apart from other market research firms, according to officials.

“[Britton] identified this technology inside of the company and leaned all the resources into that and grew Suzy out of that,” Mansfield said. “So it was his insight into knowing the market and focusing on this one area of technology.”

To provide these solutions, the company implements a mix of several technologies, including artificial intelligence, and it has proprietary software, Mansfield said.

“We provide market research and results in hours to days versus days to months. And those technologies to drive that are much more fast-paced in real time,” he said. “Our technology is not the traditional ‘get a big data warehouse and analyze it for six years.’ We’re very close to the pulse of the customers and their insights and their opinions. So our technology is all about real-time communication, real-time data gathering, showing you stuff just in the last moment.”

Mansfield, who lives and works in Wilmington and has been here for more than six years, originally came thanks to his wife watching locally filmed Dawson’s Creek and thinking it was a “wonderful-looking place.” They ended up moving here twice.

“The work-life balance here was just what we looked for, so we came back again the second time. And that’s really the basic point is that, especially now, all employees are starting to really prioritize work-life balance after the pandemic, and this area has that work-life balance,” he said. “All we need to do is build a hub and make a hybrid workplace that allows for the two ideas of safety and the ability to have serendipity happen at the office place.”

One key element for Mansfield is prioritizing quality over quantity, and providing a hybrid work option is one way to accomplish that.

“We realized that people come first, and Suzy is a people-first organization. The quality of life, the quality of your work environment actually has way more impact than the quantity of it,” Mansfield said. “The way that people looked at hiring folk yesterday is vastly different now and will continue to be different. We need to be looking forward to the hybrid approaches and actually taking the person’s uniqueness into account when we build our environments and our places coming to work.”

Suzy did not receive any economic incentives to establish the Wilmington hub, but it does have a backing of more than $104 million total venture capital money that has signaled the company’s growth.

“Early in the year, when I was looking around, we were not looking at a full floor downtown to house our folks, but now that we know the growth is here and the money gives us that ability to invest in our company to grow it, to help our customers,” Mansfield said. “We definitely know that this tech hub is going to continue to grow.

“The company has more than 200 employees, with locations in Denver, Los Angeles and Alabama, and is aiming to draw from the local talent pool first for its hub.

“It’s going to be a mix leading heavily first with locals,” Mansfield said. “Given that Raleigh-Durham is so close and all the things that are happening over there, the whole region is going to be getting an influx of tech talent.”

The company is hiring for various positions including senior engineer and programming roles.

“At its heart, Suzy is a technology company, and we’re also a people-first organization,” he said. “I want to make sure that the messages goes out that we are trying to create the best workplace culture and the best work-life balance possible.”