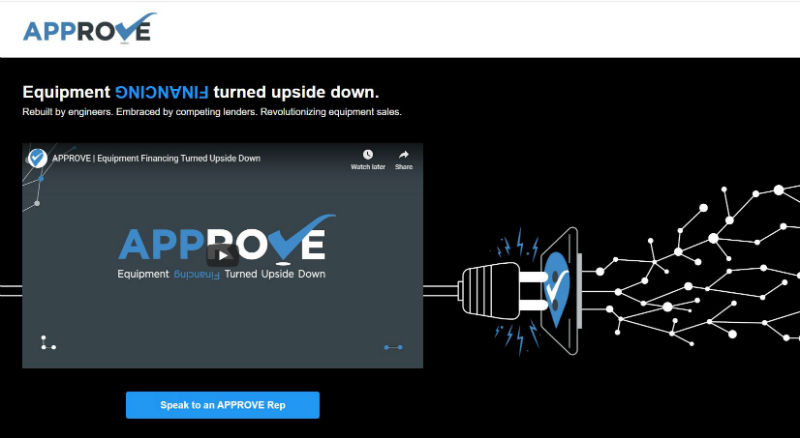 APPROVE is an equipment financing solution that facilitates the financing process for marketplace equipment lenders, buyers and sellers, according to a news release.

The product was first developed for KWIPPED’s own use.

KWIPPED, which started out in the equipment rental space, began facilitating equipment financing between its marketplace customers and suppliers about a year ago and the process was ineffective, said Robin Salter, chief marketing officer with KWIPPED.

To solve this issue, the startup’s developers created a financing solution.

“This worked so well on our (KWIPPED) marketplace, the suppliers started asking if they could use the same solution with their own direct customers. So, we bundled all the features of our marketplace solution together and branded it APPROVE. Now suppliers can leverage the power of our technology and the competitive lender network,” he added.

The product, offered as a $79 monthly subscription, allows buyers to submit a 60-second financing application directly from their quote, includes a network with 15 of the nation’s top equipment finance companies and runs on a dashboard-style communication and collaboration platform that enables equipment sellers, buyers and lenders to track and manage financing transactions from start to finish, according to the release.

“Financing of all B2B equipment and software is measured in trillions of dollars annually,” he said. “However, financing in the equipment markets we are focused on collectively generates about $400 billion annually.”

Including the large market size, APPROVE has the potential to become the company’s largest revenue channel because it is solving a real problem and because it is provided as a SaaS offering, Salter said.

“63% of B2B equipment is financed, yet less than 10% of equipment suppliers proactive promote financing costs on quotes and at the point of sale,” Salter said. “This is a huge market gap that APPROVE fills very effectively.”

The product’s target market includes businesses that sell commercial or industrial equipment that costs more than $2,000.

KWIPPED is a Wilmington-headquartered firm with an office at 228 N Front St. It received $1.3 million in funding in 2019.

“This equipment financing tech has proven itself to deliver a powerful competitive advantage that results in significant sales growth,” said Robert Preville, CEO of KWIPPED, in the release.