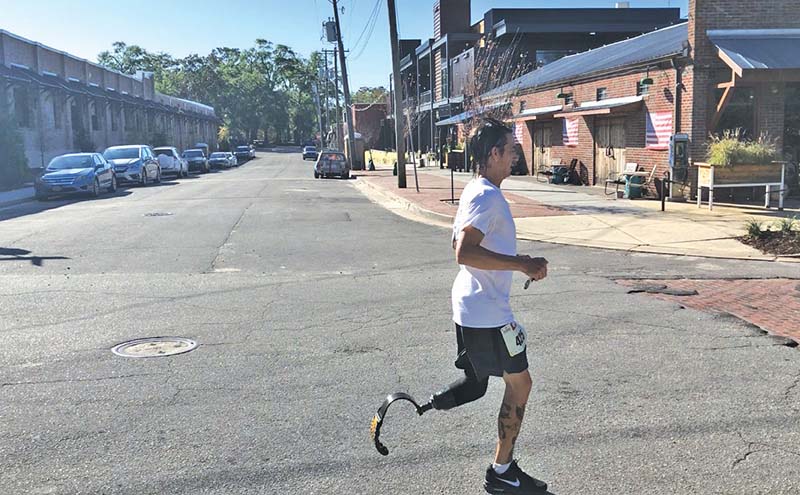 Marc Dunshee has been wearing and participating in races using Wilmington-based ecoTEKindustries’ first leg prosthetic prototype made from hemp fibers. (Photo courtesy of ecoTEKindustries)
Working from his garage in Wilmington, Kyle Trivisonno, a board-certified prosthetic technician, was able to create a prosthetic leg out of hemp fibers, which he says is a safer, cheaper and stronger alternative to the traditional carbon, fiberglass or Kevlar materials used in prosthetics.

His desire to find substitute materials used in prosthetics arose from his job in the field and concern about the effects those materials could have on his health.

“Prosthetics is wonderful, just being able to be part of the process. I don’t know if there’s anything for me in the world better than being in the room for an initial device deliver for a new patient,” Trivisonno said. “I started looking at prosthetics and what we did through an entrepreneurial lens. What are the biggest pain points? What is the worst part of this job? Is there a way that I could perhaps fix that?”

As a former technician working at Atlantic Prosthetic Services in Wilmington, Trivisonno identified the materials used for prosthetics as one of the main problems.

“I looked at where we spend the most money on, and what is the worst to work with, by far, grinding fiberglass and carbon fiber in a little room is caustic. There’s a lot of health concerns that are raised, and carbon fiber is expensive,” Trivisonno said.

Through research, Trivisonno found that hemp, a plant often grown for its seeds and oils including cannabidiol or CBD, could be used in prosthetics because of its similar strength to man-made fibers.

Marc Dunshee has used Trivisonno’s first prototype for more than a year. Dunshee is an avid runner who has participated in races using ecoTEKindustries’ hemp prosthetic and is preparing to run a marathon.

Trivisonno filled a provisional patent in March 2018 on the alternative process he used to make the hemp prosthetic, which he said can also be used to make other products including boats, surfboards, RVs – basically anything made from man-made fibers.

While ecoTEKindustries has had a good start, winning a $10,000 NC IDEA SEED Micro-Grant last year giving Trivisonno the opportunity to work on research and testing at N.C. State University’s Zeis Textiles Extension, Trivisonno has been having difficulties finding the right investors and partners to grow the startup.

“Running around and doing funding for me, it’s been kind of frustrating,” Trivisonno said. “It's like a roller coaster. You think everything is going wonderfully, and then it’s not. It’s been a learning process.”

Trivisonno has received help in the Wilmington area including guidance from Jim Roberts, previous director at the Center for Innovation and Entrepreneurship and founder of Network for Entrepreneurs in Wilmington, and the local SCORE center, which helped Trivisonno with the N.C. IDEA grant application.

While Trivisonno is a Wilmington- based entrepreneur, officials in the town of Leland want to help him grow the business and bring it to Leland.

Trivisonno presented his startup before the town’s economic development committee during its regular meeting in February.

“Our goal here, I think, should be to stay engaged with this gentleman and others like him. This is a prototype of what we hope to do here in Leland – you know looking at the big picture,” Vidmar said in the February meeting. “He would be a tremendous candidate to present to investors here in Leland. We don’t want to lose him to N.C. State or any others. There are others that would love to have him work in their facility, and once he is planted in one of their facilities, he is gone.”

During the meeting, officials and Trivisonno discussed the possibility of growing hemp in the state for his future prosthetic production.

“We have close to 400 if not more farmers that have already said ‘Hey, we want to try this out, were interested in a new crop,’” Trivisonno said about farmers who were encouraged to grow hemp by the Industrial Hemp Pilot Program in the state. Hemp production is legal in North Carolina, but only as part of the pilot program under federal law, according to the N.C. Department of Agricultural and Consumer Services.

With more funding, Trivisonno hopes to obtain a full and international patent, as well as open an accredited lab, where he can run more tests on the prototype and introduce hemp fiber as an option for prosthetic manufacturing in the area.

“It will really be a choice from society,” he said. “Are we going to continue to use man-made materials or do we say we want to support our farmers and allow them to grow a textile that we can use and in a lot of cases create products and devices that perform better than the manmade counterpart?”