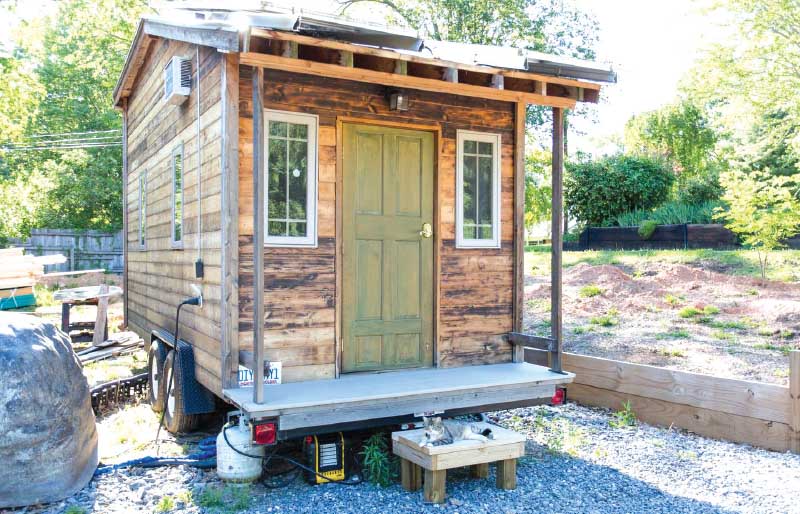 Asheville-based DIYtiny Inc., a campground for tiny homes, was the first company in the state to file for a limited public offering. (Photo courtesy of DIYtiny)
After almost two years since the NC PACES Act was enacted, three companies have completed crowdfunding fillings with the state, demonstrating that businesses are still slowly delving into this new form of funding.

The NC PACES Act, which went into effect in April 2017, created a crowdfunding exemption in the state allowing companies to raise funds from a group of individuals.

The law limits how much companies can raise to $1 million for a 12-month period or $2 million if they provide reviewed financial statements to the state.

Hush Buddy, DIYtiny Inc. and 180 Float Spa have completed crowdfunding fillings in the state, according to the N.C. Secretary of State’s office.

Raleigh-based Hush Buddy, which developed a sleep-training system, was the first company to file under the NC PACES Act in June for a North Carolina public offering (NCPO). The company was unsuccessful in their crowdfunding raising attempt, according to officials with online crowdfunding portal Localstake NC, which worked with the startup.

Another company, DIYtiny Inc., filed for a limited public offering (LPO) in the state, which can be used to raise up to $250,000 and has more flexibility than NCPOs. The Asheville- based business was the first in the state to use LPO rules to offer securities.

The company, however, did not meet its funding goal of $250,000 in equity and ended the offering, DIYtiny owner Drew Crawford said. The company provides campgrounds for tiny homes in Asheville.

Crawford said he experienced challenges in the crowdfunding process.

“The largest difficulty we came across was finding an escrow agent,” he said. “People did not know what it was; they thought it was a scam.”

Crawford plans on trying to raise money through crowdfunding again, but this time he will have a marketing plan upfront, he said.

180 Float Spa filed for a limited public offering in January. The Boone-based company plans on opening a floating therapy center and hopes to raise $35,000.

One Wilmington-based company filed for an exemption in January to raise money through an NCPO and is waiting to hear back on its approval, said Clem Seifert, co-founder and CEO of Cardinal Crowdfund Solutions. The company decided not to identify itself until it gets a decision from the state, he said.

One reason why not many in the state have used the NC PACES Act is because it’s still a new concept, Seifert said.

He explained no one has taken the lead on marketing crowdfunding in the state and that filing for crowdfunding can be complicated.

“Once we get some success stories, then it’s going to catch on and snowball,” Seifert said. “But education and awareness at this point in time is really the key.”

“The biggest myth is people confuse it with pledge-based crowdfunding like GoFundMe, Kickstarter or Indiegogo,” he added. “You’re either buying into the company if the company issues stock, or you’re loaning them money with expectation that they’re going to pay you back.”

Some North Carolina organizations have created groups and grants to bring more awareness about crowdfunding.

Wilmington-based INVESTinNC is a crowdfunding educational program for companies and investors. Cardinal Crowdfund Solutions; LogicBay Corp., a Wilmington-based company that provides a funding portal; and Nexsen Pruet and The Regan Law Firm, which provide legal services, are organizations supporting INVESTinNC.

INVESTinNC created groups made up of six companies including veteran-, women- and minority- owned businesses, that work through the process of crowdfunding together. A group for Wilmington- based companies will also be formed, Seifert, who is also a principal at INVESTinNC said.

NC IDEA, a foundation aiming to support entrepreneurs, created an investment crowdfunding grant to test out interest in the area for alternate funding. The grant provides $5,000 in funding as well as support from NC IDEA and Localstake NC.

NC IDEA received 14 applications with the majority from Charlotte and Piedmont businesses. One Wilmington firm applied for the grant, and finalists will be notified March 6.

“This particular grant offering is an experiment because we’re trying to see if it would be a viable alternative for entrepreneurs to raise money,” said Thom Ruhe, CEO of NC IDEA.

What crowdfunding can do for companies and investors is provide a more accessible alternative with the potential to shift the traditional venture capital scene, Seifert said.

“It opens up a whole new pool of investors,” he said. “Crowdfunding democratizes investment. It will allow smaller communities to take advantage of this program and energize the investors in those areas.”