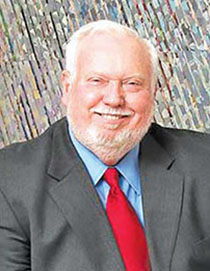 Cecil Reynolds
For Cecil Reynolds, being a board member and investor for Wilmington-based SportGait Inc. is one way to support the community that fostered his growth in the field of psychology.

One class at University of North Carolina Wilmington influenced Reynolds and sent him down a path to become a neuropsychologist researching youth development. That class was led by Robert Brown, a psychology professor who taught at UNCW for more than 30 years.

“I was kind of stumbling around trying to figure out what it was I really wanted to do, and I happened upon a professor who was just completely inspirational for me,” Reynolds said.

After graduating with a psychology degree from UNCW, Reynolds left his hometown to attend graduate school at the University of Georgia, earning a degree in psychometrics.

“I got particularly interested in how we measure things as scientists because if you really got to do research on something, you have to be able to measure it,” Reynolds said.

Reynolds has an extensive title as emeritus professor of educational psychology, professor of neuroscience and distinguished research scholar at Texas A&M University.

After all those years and work spent in the field of psychology, Reynolds once again has a presence in Wilmington through SportGait.

A subsidiary of LifeGait, SportGait is a Wilmington-based startup that developed an app to help parents, coaches and doctors monitor concussion signs and symptoms in minors.

The startup is partly owned by UNCW, with investment from Seahawk Innovation, a public-private partnership with the university that provides funding and consulting for local startups.

SportGait is also housed at UNCW’s Center for Innovation and Entrepreneurship with Chris Newton as its president and CEO.

Reynolds decided to join the board in April because SportGait tackled an issue he was knowledgeable about.

“SportGait has as one of its goals to provide the best possible measurement of the presence and aftermath of concussive injuries related to sports, particularly in youth,” Reynolds said.

Reynolds was also familiar with athletic health as he was signed by the New York Mets organization in 1969 where he was pitcher in the minor leagues for five years until he sustained a career-ending shoulder injury.

Reynolds invested an undisclosed amount in SportGait, which he decided to do after looking at three things: the problem SportGait is trying to solve, the market and the leadership, he said.

“Kids who are doing anything active is the market,” Reynolds said. “So clearly that’s a real big number. There is the possibility of substantial geometric growth. Then I am looking at management, I’m interested in whether these folks have experience.”

SportGait has raised $1.47 million from investors since 2017, according to filings with the U.S. Securities and Exchange Commission. Most recently, the company raised $430,000 to be used for tech development.

Being a board member and an investor means that Reynolds can influence the company with his background in the neuropsychology sphere.

“Where I can contribute most is from my knowledge base and how to improve the company’s product as well as advise them on a corollary market for the product,” Reynolds said. “There’s lots of places where this technology can be applied outside of organized sports.”

While the future markets for SportGait appear wide, the company will still be focusing on expanding its reach in organized sports users in 2019, Geatz said.

“Focus is going to be getting those apps in the customer’s hands,” Geatz said. “This is a sales expansion year that will focus on youth athletic clubs as a target market to download the free app and the free app is then used by parents to educate the children on the dangers of concussion.”

SportGait is there to contribute to the entrepreneurial nexus in Wilmington, Geatz said. Both SportGait and Reynolds were influenced by Wilmington, which led them to form a partnership that makes sense.

“It’s an added feature for me that the university owns a piece of SportGait,” Reynolds said, “because if I can help make SportGait successful, then that's another way for me to give back to UNCW for the education that I got from them and for the inspiration I got from my mentors there.”