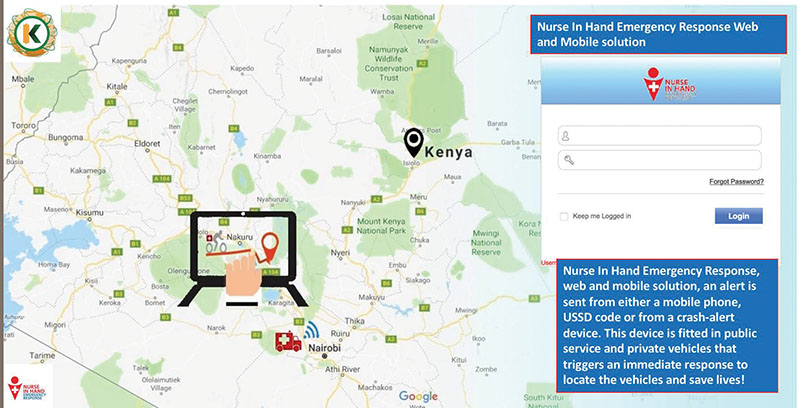 Nurse in Hand, an emergency response application that alerts responders to car accidents in Kenya, is one project KWHCoin is involved with. (Image courtesy of KWHCoin)
About 6 million people in Sierra Leone don’t have access to electricity, which is why a Wilmington startup has chosen that country as one focus area for its product and services.

KWHCoin, a blockchain-based renewable energy company, has plans to install over 50,000 solar energy systems in Sierra Leone in 2019 with help from its partnership with Teleficient Communications, a Triangle-based telecommunications company.

The plans for creating a new way to distribute electricity started five years ago, when BWHCoin founder and CEO, Girard Newkirk, began research.

KWHCoin has five employees in Wilmington with an office located at tekMountain, as well as global collaborating partners and consultants, Newkirk said.

When someone uses a solar energy system to power their homes, they might have leftover energy that was not used. If they are still connected to the utility power grid, they can send this energy to the utility company, which will result in an energy credit they can use on a winter day.

With KWHCoin, instead of sending that surplus energy to the utility company, that energy can be tokenized into a KWHCoin.

One KWHCoin is valued at 1 kilowatt per hour which is deposited to an online wallet.

That online wallet is part of a software platform developed by KWHCoin, which will be an app where users can see their balance and can trade, sell and buy energy.

“We're building an app that will allow them to trade peer-to-peer, it sort of allows them to become their own energy company,” Newkirk said. “That extra energy that you actually didn't really have a way to track or even measure the value, we're unlocking that and enabling that so that is going to allow people to become their own energy producers.”

The app has been beta tested and will be completed in three to six months, Newkirk said.

KWHCoin raised $1.1 million in its Initial Coin Offering two-day private sale and about $300,000 during the offering.

One of the features of KWHCoin is that it will lower the cost of electricity by getting rid of certain fees and providing a more flexible energy consumption service, Newkirk said.

“The cryptocurrency allows us to lower the cost because you can sell it by the kilowatt hour and they can use that as a medium of exchange,” Newkirk said.
“They might not be able to afford to pay in advance for one month of electricity, but they can buy daily access by kilowatt hour.”

KWHCoin would make it easier for people to have reliable energy because they have an entire platform of services, he said.

“We're not only a software platform, we're like an ecosystem,” Newkirk said.
“We have other partners that provide other services like building microgrids and developing renewable energy resources. Not only will we develop the software platform, we're also going to come in like a 21st century utility company and help set up the energy infrastructure.”

KWHCoin has also partnered with Lucy Njuguna and Stanley Gitau in Kenya to develop “Nurse in Hand,” an app and web application that geo-maps a car accident and alerts paramedics and any other emergency responders to the scene.

“The biggest friction point is that they don't have emergency management services to cover any of their major roadways,” NewKirk said. “We're going to set up emergency care centers along this 800-mile stretch of road.”

The Nurse in Hand app has already been completed and started its first mission testing in October, he said.

KWHCoin also plans to service Puerto Rico, especially after the country was affected by Hurricane Maria.

Newkirk said they had identified the municipality of Orocovis as the area in Puerto Rico they want to work with.

“There are a lot of moving parts as far as that project being on the grid, but we still have connections with the mayor of Orocovis,” Newkirk said. “Our plans are to use that as our use case for how we can create our own grid based on natural resources in one of the most remote areas in the world.”

KWHCoin is offering an introductory Blockchain Cryptocurrency class at Cape Fear Community College with the long-term goal of preparing the community for the technology industry.

“We want to use that [the class] as a platform to build North Carolina, particularly the Wilmington area, as a technology hub,” he said. “We feel like it's going to be the fuel that is going to boost the 21st century economy and Wilmington has a great opportunity to be on the forefront of that,” Newkirk said.

With its products and services, KWHCoin hopes to decentralize energy and promote a localized energy source for communities.