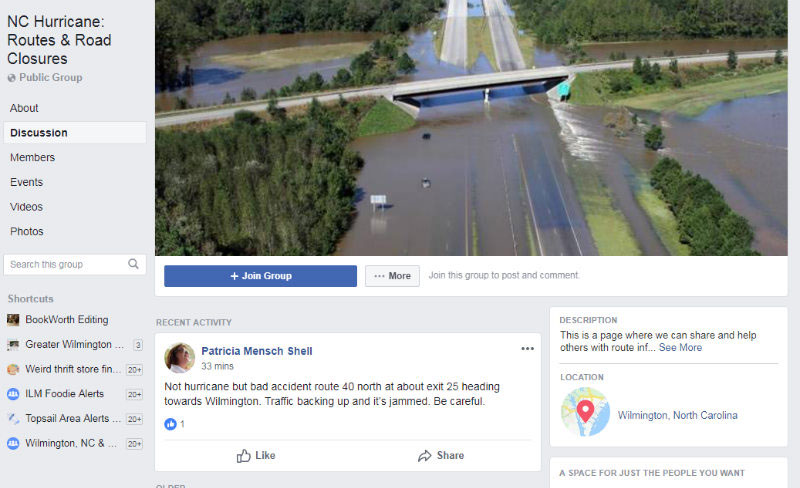 Robert McIntosh, owner of Coastal Cell Phone Repair in Wilmington, made a lot more “friends” than he expected during Hurricane Florence.

On the Tuesday before Florence made landfall Sept. 14, McIntosh assumed control of a Facebook group begun two years ago in the aftermath of Hurricane Matthew by a friend, Jonathan Ward, a photographer who used the social media network to keep family and acquaintances in Lumberton aware of weather- and traffic-related issues.

In three days, the N.C. Hurricane Routes and Road Closures group jumped from 5,000 to 30,000 followers, allowing participants to trade real-time information on road conditions, sometimes in advance of official notifications.

At the same time, “A main kind of distraction was the amount of misinformation” fed to McIntosh from various sources, he noted. So McIntosh monitored confirming messages and imposed a filter to block misleading or duplicative information.

McIntosh was one of an untold number of citizen volunteers employing social media who supplemented the around-the-clock efforts of city, state and federal agencies to keep the public safe and informed during Florence.

“Everyone within the city had their jobs, and they had their hands full,” McIntosh acknowledged.

Malissa Talbert, spokeswoman for the city of Wilmington, said the use of social media has become increasingly relevant during emergencies, including hurricanes.

With the proliferation of available communication channels, “we’re less sure now where they’re getting their information,” she said of city residents. By stepping up its own use of Facebook, Twitter and Nextdoor, “We have an established audience that we can reach out to,” Talbert said.

While the omnipresence of Facebook made it a natural go-to resource, the growing clout of Nextdoor made it another valuable tool for hurricane-related information.

There are now 428 Nextdoor neighborhoods in the Wilmington area whose verified members share information on topics such as home improvement and crime but who can also help each other in times of emergencies, said Annie Barco, spokeswoman for the San Francisco- based social networking site.

Throughout the storm, Nextdoor members offered to do grocery runs and pinpointed the location of public shelters. Neighborhood businesses also volunteered post-storm cleanup services at no cost, Barco said.

Local agencies that pushed down messages through Nextdoor included the city of Wilmington, Brunswick County and the county sheriff ’s office, the town of Leland and town police.

While such agencies can funnel emergency information down to a single neighborhood and can respond to any questions that come back, they are tied to a separate platform and cannot intercept private neighborhood content.

“This is the first time that a national agency has used our public agencies platform in this way,” Barco noted.

“Social media has been a lifesaver” and is “a good source of direct information” that allows the city of Wilmington and other public institutions to respond to stakeholders in real time, Talbert said.

“It really excited me about how everybody came together in the community,” added Facebook group leader McIntosh.

“When people could help, they would help,” he said.