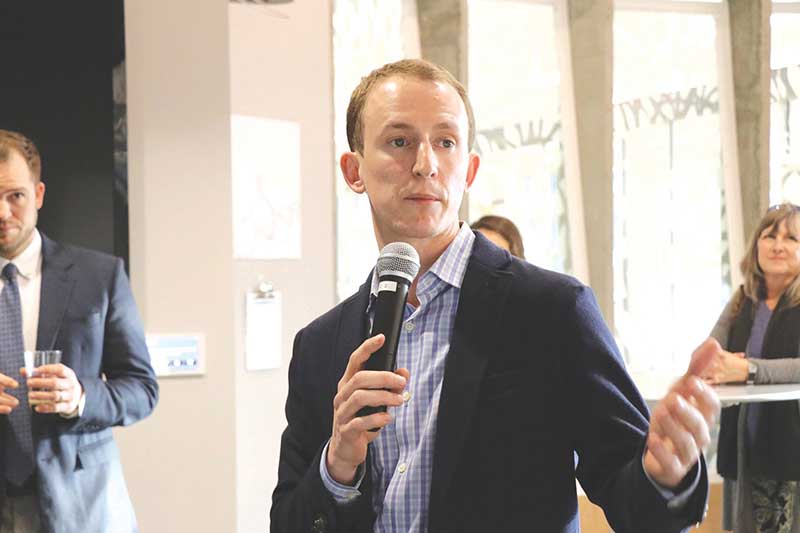 Connected Investors founder Ross Hamilton speaks during an event at tekMountain in March to celebrate a major milestone for his company. (Photo c/o tekMountain)
A Wilmington-based startup reached a revenue milestone of $5 million in 2017.
Connected Investors, the first tenant of incubator tekMountain, announced the achievement recently, saying the company has grown since 2014 to 14 employees.

The company had a record-breaking first quarter in terms of revenues and profitability this year, said Bill Brinkley, COO of Connected Investors.

Hamilton founded CI at age 23 and continues to serve as the company’s CEO. In starting the firm, he envisioned “a social platform that would consolidate the fragmented real estate investing industry,” according to a news release.

Using the profits earned from flipping houses, the release stated, Hamilton built Connected Investors “to help real estate investors around the world connect with each other, investment properties and funding sources under one virtual roof.”

The company recently launched a new product, PinPoint Profits, on March 15, and anticipates launching a mobile app this year, possibly by May, Brinkley said.

“We have finally opened the door to big data that was once only available to big corporations. PinPoint Profits allows the individual real estate investor, agents and businesses to access the mass numbers of ‘off the grid’ motivated seller inventory,”
Hamilton said in the release.

CI and tekMountain officials said in the release that both organizations have greatly valued the partnership.

“The success of Connected Investors demonstrates that tekMountain @ CastleBranch’s investment into the innovative ecosystem in Southeastern North Carolina is paying dividends,” said Sean Ahlum, senior director of tekMountain, in a statement. “As a premier innovation center, we provide the right environment for tekMountain companies to achieve similar levels of success … We have been a firsthand witness to Connected Investors’ climb to $5 million ARR [annual recurring revenue]. Their journey has been one of constant dedication, persistent hard work and willingness to creatively redefine their market.”

CI has also been working with Tidewater Equity Partners, a Wilmington- based investment firm, on the company’s strategy moving forward, said Merrette Moore, the firm’s founder and managing partner.

The Wilmington entrepreneurial atmosphere has come a long way from when Hamilton started CI in 2005, Hamilton said.

At that time, “the Wilmington tech ecosystem was a desert,” he said. “I spent half of the year traveling to surround myself with other like-minded entrepreneurs. If it hadn’t been for my real estate holdings, I would have moved. We faced more than the average struggle when it came to finding talent and funding. When tekMountain opened it felt like a bit of an oasis that attracted the people and resources necessary to grow.”