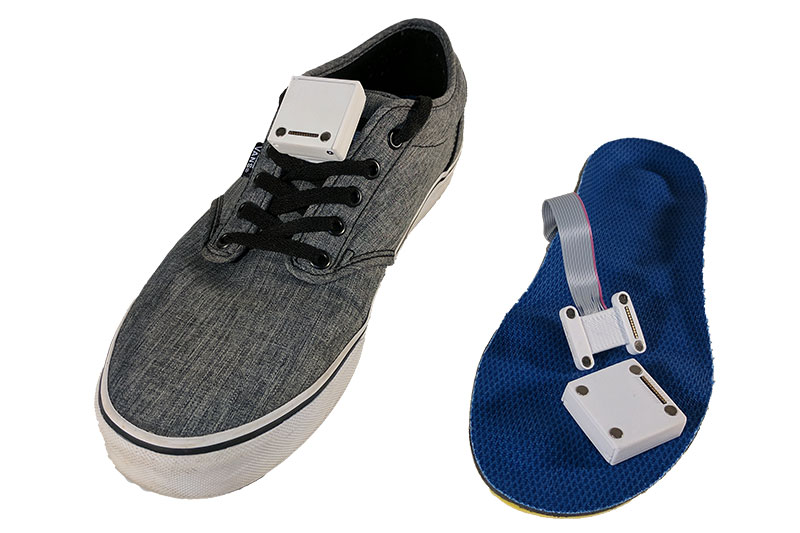 Amidst all the hyped technology, he noticed the very limited means of controlling the user’s movements.

“Video game joysticks and a method called teleportation were, and still are, the predominant means [of locomotion],” Guard said. “A little research showed everyone else in the virtual reality world agreed that locomotion control was, and still is, a major problem.”

That observation launched Guard, then the owner of GuardianPay, a local payments technology company, into his latest venture Brilliant Sole, a footwear platform embedded with a smart sensor to create a comprehensive locomotion control system for virtual reality.

According to Guard, Brilliant Sole will allow users to walk in place or sit down and apply pressure in whatever direction they want to go using the footwear.

“We’re striving to make moving through virtual reality more natural feeling and enjoyable for everyone,” he said.

Guard teamed up with a group of successful developers and engineers to form Brilliant Sole.

Guard is a graduate of the Uni-versity of Massachusetts and a user interface and hardware designer. He designed the Brilliant Sole mobile app, hardware connectors and circuit board enclosures and built and coded the working smart footwear proto-types.

Andrew Keener is the company’s chief technology officer. He holds a master’s in computer science from University of North Carolina Wilm-ington. Keener is a software engineer specializing in Bluetooth Smart and IoT, embedded programming and communications protocols, as well as mobile app development and integration.

“Subtle directional pressure ap-plied by your foot made a for a sim-ple yet intuitive controller,” Guard said. “It worked too well not to pursue further, and since then, we’ve become more and more convinced the best possible solution to VR lo-comotion involves sensor-embedded footwear.”

And the business technology community has taken notice. So far, Brilliant Sole has won this year’s Exit Event N.C. Tech Madness com-petition, was a finalist in the N.C. Technology Association startup pitch competition and was named among the NCTA’s “Top-Ten Startups to Watch” in 2017.

And it’s still just the beginning of the process.

“We just actively began raising a seed round. Hopefully, we can close that as quickly as possible and get our whole team in the same room working 24/7,” Guard said. “We’re really going to move fast and do great things once our talented and hardworking team is able to put 100 percent into Brilliant Sole.”

The company’s next goal is to launch a crowdfunding preorder campaign by the end of this year and deliver a development kit version of the product next year.

And their plans don’t stop with virtual reality.

“We’re going to focus on the loco-motion problem, yet make Brilliant Sole an open-source smart footwear platform for creators and entrepreneurs,” Guard said. “Our goal is to make it as easy as possible for others to build new businesses and solve problems with our platform.”