Brio – From Icebreaker To Drink Protector 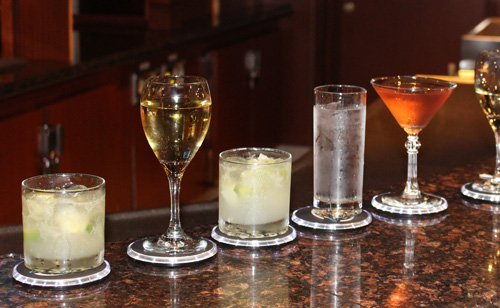 Assuming a location with other Brio users, the device could help find friends, get a bartender’s attention or play games. Brio is also a potential icebreaker for meeting new Brio users. Ross calls Brio “The world’s first socially connected coaster. It’s similar to Waze, the traffic app, but for nightlife.”

Brio’s perceived primary function shifted during last year after a woman in her early 20s watching a Brio demo told Ross, “Wow, that’s what happened to my friend.” The same reaction followed from others who were commenting on the coaster’s ability to protect drinks from tampering.

Drinkers place the coaster on top of their drink and select protection mode using the accompanying app. If the drink is moved, the phone’s screen will instantly display a flashing warning.

As the anti-tampering benefit moved to the forefront, New Potato abandoned one feature of
Brio that was actually the original idea for the product. In 2014 the Brio coaster was first conceived as way to measure alcohol consumption.

“We tested that feature with 30 people, and not one person wanted it. We were actually glad, since the technical hurdles for measuring were significant,” Ross said.

Weighing 1.3 ounces and 4 inches across, the Brio is powered by a coin cell battery. Using a low-power Bluetooth setting, the device has a range of about 60 yards.

Brio reflects the DNA of New Potato Technologies, a specialist in electronic consumer and commercial product development. Founded in 1986 in Danbury, Connecticut, by Ross, the firm has branded its own products as well as supporting the technology needs of Fortune 100 companies. TV docks for iPods, car FM transmitters and technology for tablets and smartphones are a few of its products.

Apps and accessories remain the company’s obsession, so much so that New Potato created a trademarked word, “appcessories,” to reflect its focus on creating apps to connect with accessories.

Ross said that with the proliferation of gadgets connected to tablets and phones, an endless supply of apps is needed to control these new accessories.

A few years ago, New Potato sold the appcessories trademark to an international retailer.
According to Ross, the buyer believed the term was going to follow trademarked brand names like “Kleenex” or “Xerox” that became household words.

“Appcessories was used briefly but quickly went away. We made out very well on the sale,” Ross said.

New Potato discovered that turning a profit with apps is a long shot.

“We found, unless you are in the top seven in the App store, you can’t make money. Sell the hardware, and you’ll do fine,” Ross said.

As examples, the company rolled out a charging dock with a little handle that transforms an iPhone into a casino-style slot machine. And New Potato was first on the block with an iPhone-based cycling computer.

If all goes well with the Brio launch, 2017 could be a magic coaster ride for New Potato.