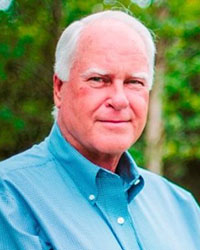 In a unanimous vote by its board of directors last week, Griffin was named chief executive officer of the emerging-growth company while retaining his role as president. He will also continue to serve as chief operating officer for an undetermined period.

J. Stephen Burnett, the firm’s co-founder and now ex-CEO, has left the top spot but has retained the title of chairman.

“As we move away from being a start-up company into a revenue-producing company with real products to sell, we have agreed that Bill will step into the role of President and CEO and have more of a role in leading the company and team,” Burnett wrote in an email to the company’s stakeholders following last week’s vote.

“I’m a very good startup guy,” Burnett added in a subsequent interview. But, he said, Griffin is the best person to take the firm he helped found to the next level. “He will execute our business plan and drive our revenues,” Burnett said of Griffin.

Founded in 2013, Koolbridge Solar’s future rides on acceptance of its signature technology, the Smart Load Center, in the residential housing market.

A solar and utility-grid breaker box installable during new home construction or residential retrofits, the Smart Load Center is designed to automatically select energy from the grid, solar panels, batteries or generators. The selection of a power source occurs when a microcontroller activates the switching of individual circuits based on weather conditions, preset user priorities, battery charge or household consumption patterns. The company points to greater energy efficiency, the potential for lower consumer bills and the advancement of clean energy as key benefits of the technology.

The handover at the top of privately-held Koolbridge is designed to achieve four significant goals during 2017, Griffin said during a weekend interview: securing approval of the company’s new technology from Underwriter Laboratories (UL), selecting third-party manufacturers, testing its technology at various residential sites and clinching some initial sales that will generate the firm’s first revenues by year-end.

“We are just about ready to have a product that’s viable,” said Griffin, whose 43 years in business management includes stints as a corporate vice president, officer and head of the government division at consumer electronics retailer CompUSA and as a regional vice president at AMX, a designer, manufacturer and seller of electronic control devices. He has also served as a partner at Cornerstone Business Advisors, a Wilmington-based strategic planning firm that helps clients launch, grow and exit their businesses.

“Q4 is really the beginning of revenue generation,” Griffin stressed.

Gaining a seal of approval from Underwriter Laboratories, an independent safety and certification firm, is critical to gaining wide acceptance in the marketplace and raising the capital needed to propel the firm forward, he added.

“That (UL Listing) should have an eye-opening effect in the industry,” Griffin said.

In a filing with the U.S. Securities and Exchange Commission last October, Koolbridge Solar disclosed that it anticipated an average monthly burn rate of $74,000 to cover its operating costs.

“Our burn rate continues to be about the same,” Griffin confirmed, “and we are putting together, right now, another raise.” During Burnett’s tenure as CEO, Koolbridge raised $500,000 in a 2015 private placement and another $1 million through a second such offering.

Conversations with engineers at Underwriter Laboratories have been encouraging, Burnett said last year, and both he and Griffin are hopeful that the certification firm will give its blessing to the Smart Load Center during the second quarter.   Following UL approval, Koolbridge intends to install about 50 Smart Load Center units in new homes in various North Carolina markets, providing an opportunity for testing and feedback before the technology is introduced commercially toward the end of the year. “My first initiatives will be to bring those things home,” Griffin said.

“It’s an exciting year for us,” Griffin said.

Said Burnett: “Bill knows how to build a solid foundation for our business that will support our growth, which could end up being faster than we think.”